‘Is There Anything Else I Can Help You With?’ Call Centres, and Christmas on Minimum Wage 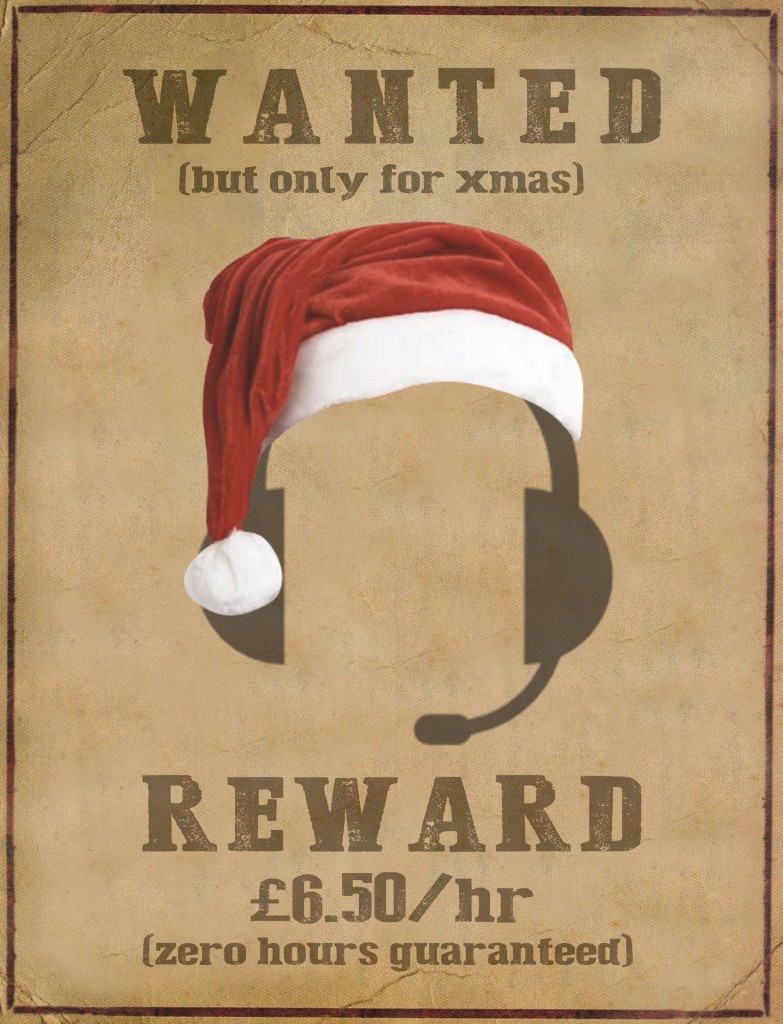 *This is a guest post, written by Jo Byrne

According to a recent report by TUC, one in twelve people in Britain are in precarious employment with figures rising by 61.8% for men and 35.6% for women since 2008. That means that 1 in 12 people are living a life of economic insecurity, and, at this time of year, it also means that thousands of parents or grandparents will be uncertain if they can afford to buy gifts for their families at Christmas. Yet the pressure to consume (to eat, drink and be merry!) is so great that many will begin the new year in unmanageable debt, often as the result of short term payday loans: typically the only form of credit available to the most economically vulnerable in society.

I am lucky. In my adult life I have never been out of work for a significant period of time. But a few years ago, just before Christmas, I found myself jobless and desperate. I had returned from living abroad stone broke and up to my eyeballs in debt. I signed on for Job Seeker’s Allowance, which at the time (2010) was around £65 per week, and despite the fact that I was living a very modest life in a shared house, I was not able to make ends meet. Though I am grateful for the help I received from the government at that time,  the amount of money provided is simply not sufficient to live with any real quality of life. In fact, according to a report by The European Council, it is not even enough to survive.  While I was looking for work, I went further and further into my overdraft and using my ‘emergency’ credit card became a regular occurrence.

Fortunately, before things got too desperate, I received a call from a friend who had a senior position in a local call centre offering me a temp job over the Christmas period. I arrived at the call centre that very evening, along with what seemed like hundreds of others, ready for my training. To say that the ‘training’ that we received was inadequate would be generous. We spent that one evening packed into a room listening to the jargon that would soon become our second language and then we were sent home with our zero hour contracts and our company branded sippy cups. The next day we were on the phones taking orders for the Christmas campaign of a large, national department store. It was like nothing I had ever seen. Hundreds of people attached to headsets, whose sole purpose was to transfer the call to a colleague in another department to submit their order.

Though the task was painfully tedious in its endless monotony, we had no idea how easy we had it. Soon, as the volume of calls increased in the build up to Christmas, we were not just expected to transfer calls but to take orders of our own. We were clueless, but we trotted obediently into our new role, reciting the sacred mantra of the call centre ‘DPA, DPA, DPA!’  Rumours had swept through the aisles – you could personally be fined £2,000 if you failed to fulfil data protection requirements. Not the company – you as an individual. It was never explained quite how they proposed to extricate this vast sum from their impoverished workers (my monthly wage, before tax and if I managed to get 37.5 hours a week, which wasn’t guaranteed, would be less than £900). Perhaps we would be expected to wash the dishes in the staffroom for the rest of our lives in lieu of payment?

The first week was utter carnage.  With barely any experience, we were expected to deal with the unmitigated fury of customers who had finally reached a human being after being transferred from pillar to post, languishing in the purgatory of muzak, on hold for what seemed like (and sometimes actually was) hours. We were patronised, insulted, verbally abused, even threatened, and soon we began to drop like flies. I heard stories of some people putting the customer on hold and just getting up and walking out, or leaving for their fifteen minute morning break and never coming back. Others snapped back with equally brutal force, sometimes justified, sometimes just the result of emotional fatigue.

Me? I just cried. I didn’t understand how or why people could be so, so mean to a complete stranger. Most of the time I could handle it but occasionally, when I was feeling vulnerable, I would crumble. On one occasion when I was grieving for a beloved friend who had just passed away, I could not cope with the vitriol of the customer and fled the room, overwhelmed by floods of tears. One of the many downfalls of having a temporary contract is that you are not entitled to the usual benefits afforded to workers in the UK, including sick pay or compassionate leave. We were exhausted. At peak times we would log on to our phones and only stop talking for break and lunch. At times we would end our shifts barely able to speak. We were a living, breathing capitalist machine at the beck and call of the customers as they relentlessly demanded more and more.

As Christmas fast approached the calls became even more challenging. Packages hadn’t arrived, or had been callously chucked over a hedge by the delivery driver (this happened to one customer who had ordered a full set of crockery, which was now more like a dangerous jigsaw puzzle), another had placed the package in a full outdoor ashtray and it had caught on fire. These calls would be ‘escalated’ sooner or later and the poor supervisors would lumber gloomily from one raised hand to another, and one complaint to the next. We were utterly powerless; we had no authority, no autonomy, no way of placating a customer with anything other than endless, meaningless apologies, yet we dutifully took the blame and soaked up the anger of the customers on behalf of the company. The sad thing was, the ‘supervisors’ were just as powerless.

As we recovered from the horror of Christmas (including working Christmas Eve and Boxing Day) the January sales began. Our assumption that it would be more of the same was wrong – to our delight we began to have some breathing time between calls, to get to know our colleagues. What I discovered is that the ones who had made it that far in our Hunger Games-esque, survival of the fittest Christmas experience were all different. So often people assume that minimum wage workers are the ones who didn’t work hard enough in their career, or were too unreliable to hold down a ‘proper job’, but that wasn’t the case at all. There were undergraduate and post-graduate students, school leavers (who got paid even less), mums, dads, grandparents and, perhaps most sadly, those who had had careers and had suddenly been made redundant. After all, who else wants to hire a sixty-something who can barely use a computer? We only had one thing in common – we were all desperate.  Yes, It was minimum wage but if you did enough overtime it was better than being on benefits.  Some days we worked for 13 hours straight, went home, went to bed, got up the next day and did it all again. And again. And again.

If we thought the high days were bad, we had no idea how low the low days would get.  Hour upon hour of sitting, waiting for the beep in your ear. The guests on Jeremy Kyle with their bitter, distorted faces twisted into silent, subtitled, screams on the huge TV screens above us. Being forced to take your lunch break in the morning (I think the record was 09:30am), then abruptly being sent home at 11 or 11:30am, unpaid, of course. This is the crippling uncertainty that comes with a zero hours contract. You have no rights, only obligations. The company is not obliged to ensure that you have sufficient wages to pay your rent or buy food for your family. You are completely and utterly disposable and the government will not help you because sometimes you do earn more. Sometimes you can pay your rent and your bills.

I was shocked at the way we were treated. We were like cattle. If you have not experienced it you cannot imagine how it feels to be physically attached to a machine all day like a dairy cow. Even your bathroom breaks are monitored – as addressed in this Unison report from July – that describes the ‘Orwellian’ conditions in many call centres. In fact call centres have been called modern day workhouses and likened to Blake’s ‘dark satanic mills.’  Every word you utter is recorded and can, and will, be held against you at a later date. You are not allowed to drink water or coffee unless it is from your company issue sippy cup, you are not allowed to eat. Your mobile must be turned off at all times and there are regular checks. If they decide they no longer need you, you are sent home, just for the day at first, but eventually for good. It doesn’t matter how hard you work, how reliable you are, or how desperately you want and need to work. If you are surplus to requirements in the immediate future, you are gone. Just like that. Unemployed, again, and obviously without severance pay. You don’t even get paid for the rest of the day.

So, next time you have to phone a call centre; however inconvenient and frustrating the experience might be for you, even as you cringe when they say ‘is there anything else I can help you with?’ for what seems like the hundredth time, try to remember there is a human on the other end of the line, and that they are probably having a pretty terrible day, too. As infuriating as it undoubtedly is that your Christmas gifts haven’t arrived on time, or have arrived damaged – remember that the person on the end of the phone will probably be working throughout the festive season for minimum wage. They won’t have time off to visit friends and family, doubtless they will be struggling to get through Christmas without ending up in debt, and worst of all, they may not even have a job at all by New Years Day.