Festivus for the rest of us 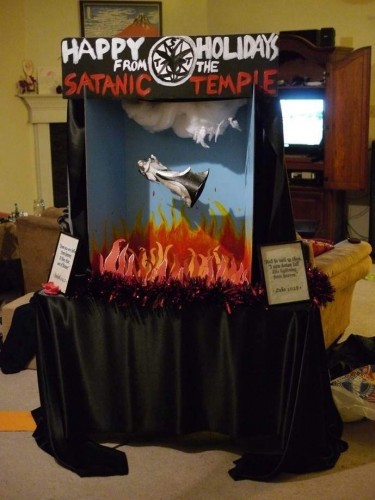 For the second year, Florida hosts a variety of religious displays in the rotunda of the state capitol.  This year, for the first time, the Satanic Temple erected their seasonal exhibition of an angel falling from Heaven into a fiery pit.  The Sataic Temple presentation complements a Christian nativity scene as well as other anti-religion and atheist displays with seasonal depictions including a “Festivus” pole constructed from Pabst Blue Ribbon beer cans and a Flying Spaghetti Monster with the sign that says, “A closed mouth catches no noodly appendages”.

The Satanic Temple is also exercising their right to distribute religious materials in an Orlando school district, performs same sex religious weddings, and most recently is using the Hobby Lobby decision to exempt women from anti-abortion laws.  In many cases information about elective abortion attempts to personify the fetus or includes unscientific post-abortion effects such as “post abortion syndrome” or increased incidence of ovarian and breast cancers.  Their position is that because this counseling is not based in scientific evidence, Satanists should be exempt from informed consent mandates.  The letter, Satanist women are instructed to present to their practitioners, states: “I regard any information required by the state statute to be communicated or offered to me as a precondition for an abortion (separate and apart from any other medical procedure) to be based on politics and not science.”

The Satanists have an agenda.  It is not the agenda we all thought they had.  I’m sure everyone has a story of their brush with Satan.  At the height of the death metal craze, one of my elementary school classmates got caught with a satanic bible – probably a souvenir from an Ozzy Osbourne concert his older sibling attended.  I remember that he was absent from class for a long time after that.  Lesson learned: the way to get adults to freak out – dabble in Satanism.  This didn’t seem like just any other religion.  Practicing this religion meant suspension.

Then the Satanists grew up.  And like other social agitators of different generations they too became activists.  Yes, Satanists have been around long before legal abortions and marriage equality.  But like many other organized religions of the twenty-first century they aren’t taking themselves quite so seriously.  (Satan Lite – no more lawn burning or bird eating)  Instead, they adopt political campaigns such as erecting statues of Baphomet at courthouses that still have the Ten Commandments on the lawn as a solution to ACLU charges of violation of church and state law suits.  Did I mention they are also fairly successful fund raisers?

And now I must adopt an analytic stance.  Let’s all assume that there isn’t a Hell requiring a leader named Satan.  Let’s assume that organized religions exist to inculcate societal virtues.  According to W. Scott Poole in his 2009 book, Satan in America: the devil we know, because religion and culture influence one another, the concept of a devil is culture’s way of representing the demonic Other.  The presence of the devil reinforces the idea that American’s are exceptional and exempt from the moral complexities of history.  That is, if some things are uniquely American such as protecting democracy around the world, then the devil symbol allows absolution of moral responsibility for questionable actions such as torture.

If certain people, such as terrorists for example, are cast as devils then the atrocities revealed by the Senate Intelligence Committee investigation into CIA treatment of terror suspects can be defensible.  According to a recent Washington Post-ABC News Poll a full 59% of Americans believe the brutal methods the CIA used on suspected terrorists were justified.  The numbers are apparently more shocking when broken down into religious groups: 69% of white evangelicals, 75% of Protestants, and 66% of Catholics believe the treatment was justified.  Wait? What?  What happened to the love and forgiveness?  Incidentally a majority of non-religious adults, 53%, believe the CIA’s actions were NOT justified.

The presence of the devil in society allows for seemingly reasonable infractions against a strongly held moral code.  We can make an exception to strict commandments about killing and theft by casting the Other as evil.  It allows us to continue our wrong doing without a serious examination of the consistency of our beliefs.  Enter the Satanic Temple, God bless ‘em.  As an influential cultural outcast, they are loudly taking up causes of oppressed groups and appropriating these causes to construct a newly fashioned personality.  By aggressively opposing popular American ideals such as corporeal punishment in schools they identify with the little guy, in this example the “bad” children.  In doing so, they force us to see the evil inside our schools and thus ourselves because of course it’s shameful that the Satanic Temple is the one willing to step up and defend our children from harm.  We cannot side with Satan right?