It’s the most wonderful time of the year…[Source By Mercy for Animals [CC BY 2.0 (http://creativecommons.org/licenses/by/2.0)], via Wikimedia Commons]

Christmas comes every year, and every year, much like a snowball rolling down a mountain in er…Lapland, it accumulates new ‘traditions’. New additions in recent years include Christmas jumpers, Black Friday, and songs from X Factor going to Number One. Great. Go back further and see that Christmas trees, Santa Claus, crackers, Saint Nicholas, Christmas carols and even the nativity story have all been tacked onto what was originally the pagan festival of the winter solstice, the shortest day of the year. Everything else is just hundreds of years of elaborate window-dressing: an ever-evolving Christian, Capitalist, Western cultural snowball.

One key Christmas tradition that seems to have become fundamental in the last half-century is the need to eat meat, lots and lots of it: Turkey, goose, rabbit, pigs-in-blankets, cold cuts of pork, beef, antipasti, KFC (if you’re in Japan) and even cat and dog meat (if you’re in Switzerland). The TV adverts are full of it, the supermarket warehouses are full of it, and come Christmas day evening, so will the bellies of the western world.

Full disclosure: this will be my first vegetarian Christmas, and it’s given me reason to pause and consider our wider relationship with meat, and our failure to really come to grips with the environmental implications of our love affair with it.

Animal agriculture has already grown massively as more people around the world have got richer and joined the carnivore party. Looking back, meat production has doubled since 1977, and over the last half-century it has increased fivefold. Production of beef, poultry, pork, and other meats has risen to nearly 40 kilograms per person, more than twice as much as was available in 1950. 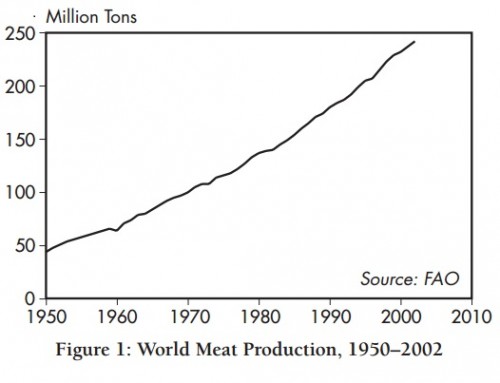 Looking forward, the FAO estimate that consumption of meat and dairy products will rise by 76% and 65% respectively from 2007 – 2050. In one sense, this is a good sign of more people around the world being lifted out of poverty and being able to buy the food that they want to eat. The problem is that if the whole world wanted to eat like Americans, we’d be pretty stuffed, literally and figuratively, because agriculture, and especially animal agriculture comes with a hefty carbon price tag.

FYI, Americans eat an average of 127kg of meat per person per year, compared to 84kg in the UK, 59kg in China, and just 4.4kg in India, according to FAO data here.

Currently, animal agriculture is a huge contributor to overall greenhouse gases in the atmosphere. Some estimates put current GHG emissions from animal agriculture at 14.5% of the global total, others at 19-29%, which is more than the total global emissions created by transport (13%). Recent papers have claimed that unless something changes, agriculture will take up our entire carbon budget by 2050 – meaning that all other sectors, like energy production, transport and industry would have to full decarbonise for us to avoid a 2 degree temperature rise i.e. they would have to do the impossible.

A recent report published by Chatham House thinktank, titled “Livestock – Climate Change’s Forgotten Sector” illustrates the huge problem posed to the environment posed by agriculture in general, and animal agriculture in particular. The global livestock industry uses up a lot of space (perhaps 45% of the world’s surface area), they require astronomical amounts of water and they use up crops which could be eaten directly by humans. Before slaughter, animals, especially cows, create huge amounts of methane when they fart or burp (seriously!), and after slaughter, meat also creates emissions in its transportation.

There is also an ethical dimension to the way that feeding animals to make meat is given priority over feeding (poor) people. According to columnist and environmentalist George Monbiot, writing in typically stark language, “Were the grain now used to fatten animals reserved instead for people, an extra 1.3 billion could be fed. Meat for the rich means hunger for the poor.”

All this seems pretty dire, and I’m not even discussing the poor treatment of animals in intensive factory farming, or the deforestation caused by animal farms, or the dietary implications of eating meat – separate but important issues. Perhaps the most interesting thing about all this is how little animal agriculture is debated, even by the most high-profile NGOs. Some TV chefs, like Hugh Fearnly-Whittinstall and Jamie Oliver might tell us that we ought to eat less meat, and there are campaigns such as Meat-Free Mondays, but the likes of Greenpeace, Friends of The Earth and the WWF largely steer clear of the issue.

Why would Green NGOs not want to discuss an industry which is causing (at least) 14% of GHG emissions? 2014 Documentary ‘Cowspiracy’ tries to answer this question. The film examines, in depth, many of the consequences of the livestock industry that I’ve discussed here, and it’s well worth a watch (a trailer is here). In the film the main narrator Kip Anderson repeatedly tries and fails to get an interview with Greenpeace, but they appear reluctant to discuss the issue. Anderson also meets the deputy head of the Sierra Club and asks what their policy is on animal agriculture. The answer? They don’t really have one! Again and again in the film, supposedly ‘green’ NGOs shy away from the issue. Perhaps this is because, as the Chatham House report argues, NGOs and campaigners are reluctant to tell people the bad news that we need to eat A LOT less meat, cheese, eggs and milk.

Why the silence? Firstly, NGOs are membership organisations and one would presume that most of their members eat meat and therefore don’t want to feel alienated by a group they donate to. Secondly, NGOs and environmentalists like to frame climate action in terms of Us Vs Them, with ‘Them’ usually referring to evil multinational corporations, petrochemical companies, energy firms, and the compliant politicians who do their bidding. All we need to do is defeat the ‘bad guys’ to save the planet, and if we as individuals don’t have the time to fight, we can donate to the NGOs to fight on our behalf.

The harsh reality might be that consumption, in the most basic meaning of the word – what we eat and what we drink – is the real problem, and we cannot pass the buck on that one. Culture, traditions and social norms may explain – and excuse – a lot of behaviour, but I would say that ultimately we have to take individual responsibility for what we put into our own mouths, at Christmas as much as any other time.

Have a good one.