The Rise of ‘Citizen Economists’ and ‘Economics Citizenship’ 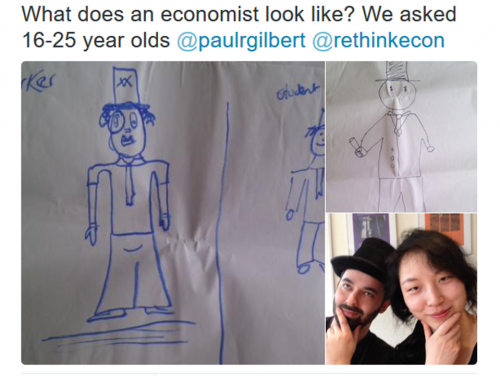 A couple of years ago, Cambridge economist Ha-Joon Chang wrote in an opinion piece for the Guardian that the “economy is too important to be left to professional economists (and that includes me).” In fact, Chang suggested, judgments made by “ordinary citizens may be better than those by professional economists, being more rooted in reality and less narrowly focused…Indeed, willingness to challenge professional economists and other experts is a foundation stone of democracy. If all we have to do is to listen to the experts, what is the point of having democracy?” Chang is hardly the only high-profile economist to have questioned, post-2008, the status of the ‘expertise’ that had been claimed for economics – typically by those who have endorsed the narrowest, most abstracted and least ‘human’ version of the discipline. Since Chang penned his column, the UK’s student-led Post-Crash Economics Society has begun to develop a ‘Crash Course in Citizen Economics’. And, last week, the Economy project, an offshoot of Rethinking Economics, launched an accessible, pluralist economics education website that is run on the principle that ‘economics can be for everyone.’ But what would it mean to try and produce ‘citizen economists’ or promote a form of ‘economics citizenship’? And how might the sociology of science and technology help us think about these initiatives?

In the age of ‘Big Data’ and crowdsourced biodiversity monitoring, citizen science has become a fairly commonplace term, subject to discussion in parliamentary briefing notes and even earning its own Oxford English Dictionary entry during 2014. But the collaborative sense in which the OED and many conservation organizations speak of citizen science has somewhat erased the memory of an earlier, confrontational form of citizen science. Ulrich Beck’s influential sociological work on ‘risk society’ describes a world in which scientific knowledge may not only enable the management of environmental and health risks, but may produce new risks and uncertainties (think of nuclear fallout, or agrochemicals like DDT): “No longer the preserve of scientists and experts, the nature of hazards is demonstrated everywhere and for everyone willing and interested to see.” Alternatively, ‘citizen science’ might also signal the kind of contests that arise when communities affected by large-scale resource developments might contest the ‘counter-science’ produced by industry scientists.

As Melissa Leach and James Fairhead note, the social scientific literature on ‘citizen science’ has tended to focus on engagement and contestation with ‘expert’ science. However, the body of (largely anthropological) literature concerned with ‘indigenous knowledge’ and conservation or development has emphasized the “relative autonomy of dissonant knowledges” or the conceptual and moral dissonance between [indigenous and scientific] knowledge systems,” and has thus been relatively silent on contestation with ‘expert’ science. (Although this is admittedly not always the case.) Leach and Fairhead conclude that if it is recognized that “all knowledge is socially produced”, the divides between indigenous and scientific, lay and expert, all dissolve into “a plethora of partial perspectives.”

With this, Leach and Fairhead could be placed within what Harry Collins and Robert Evans term ‘Second Wave’* studies of science and scientific knowledge, which revealed that scientists use “ordinary reasoning” in politicised contexts to bring controversial technical arguments to a close. Second Wave sociological studies of science – or work like Leach and Fairhead’s – effectively solve what Collins and Evans term the Problem of Legitimacy: if scientific knowledge is derived via ordinary, socially-embedded (and technologically-mediated) reasoning and politicking, then “the basis of technical decision-making can and should be widened beyond the core of certified experts.” But, Collins and Evans argue, this introduces a new problem, the Problem of Extension: “How far should participation in technical decision-making extend?” Or, put otherwise, “How do you make decisions based on scientific knowledge before there is absolute consensus?”

Citing instances like the now discredited claim that there is a link between MMR vaccination and autism in children, Collins and Evans suggest that the “romantic and reckless extension of expertise has many well-known dangers – the public can be wrong.” Hence there is a need for a ‘Third Wave’ of science studies that distinguishes between types and levels of expertise. (Although see this by Fairhead and Leach for a different, anthropologically-grounded interpretation of the MMR vaccination controversy.) At this point, however, Collins and Evans run up against scientific citizenship, as opposed to ‘citizen science’. In a wonderful blog post for Making Science Public, Brigitte Nerlich has traced out the way the term scientific citizenship is used to signal both the “active and aware participation of citizens in the democratic process in the knowledge society,” and the extent to which scientists may be called upon to act as politically responsible citizens in regard to their research and its claims. Many discussions of scientific citizenship engage with climate change – potentially a paradigmatic case of what Collins and Evans term ‘making decisions based on scientific knowledge before there is absolute consensus’.

In a 2012 lecture, former Royal Society president Martin Rees emphasized the citizenship of scientists, downplaying controversy in climate science (“The science is intricate. But it’s a doddle compared to the economics and politics of climate change”), and arguing that it is “crucial to keep ‘clear water’ between the science on the one hand, and the policy response on the other.” Rees went on to suggest that “even if there were complete certainty about how the world’s weather  responded to CO2 changes, there would still be divergent views on what governments should do  about it. And scientists should engage in these debates — though on the more general issues they should do so not as experts but as ‘scientific citizens’.” A somewhat different tack istaken by sometime sociologist of science Bruno Latour. As Martin Mahony observes here, Latour calls for ‘science with politics’: what, asks Latour, if climate scientists could respond to charges from ‘sceptics’ that the IPCC is a ‘lobby’ by saying that “yes, it is a lobby. A lobby for what kind of agents must be taken into account in political discussions of how we want to re-make the common world. You [the accuser] are a lobby too. How about showing us exactly what it is that you would like to see retained or remade in the common world?” Mahony is sympathetic to Latour: “Climate change is about the very relations we have with other humans and the material world which surrounds us. It can only be both scientific and political.”

Could not the same be said about economic policy? About the management of the public debt, of the choices that are made about welfare, austerity and redistribution? About whether to target inflation or unemployment through monetary policy? About quantitative easing versus ‘people’s quantitative easing’? Previous sociological studies of citizen science can perhaps help us think about ‘citizen economics’ initiatives such as those emerging from Post-Crash Economics Society, Rethinking Economics, and Economy. Will citizen economists be those who collaborate with ‘expert’ economists in their management of economic life? Will they elaborate autonomous domains of economic expertise, or confront expert economists head on? How will economic expertise be measured, beyond formal certification, if even Cambridge academics like Ha-Joon Chang are sceptical of the discipline’s claims to authority and privileged access to economic ‘truth’?

The same parallels could perhaps be drawn between scientific citizenship and something that might be termed ‘economics citizenship’: what can we expect of our economic experts? What kind of relations with industry can be tolerated, and should an economists’ code of ethics be instituted? Perhaps with economics it is less sensible than in relation to climate science to argue for ‘clear water’ between the science and the policy – so should we just ask economists to be explicit about the kinds of ‘common world’ they would like to remake (and if so, how do we measure the significance of their ‘expertise’ in such a political process)?

In my next blog for Sociology Lens, I will explore these issues in relation to one burgeoning corner of citizen economics or economics citizenship – in particular, the lively debates over how to understand (and intervene in) money creation that have effloresced in recent months. If you are unconvinced about the political importance of debates over money creation (or their potential relationship to the sociology of knowledge and expertise), I leave you with this: in 2014, a complaint was made against a UK-based bank on the grounds that its adverts misrepresented the process of money creation, as it is described by the Bank of England,. The complaint was rejected – not because the bank was found to have accurately represented the process of money creation, but on the grounds that their advert did not depart from “how the average person without specialist banking knowledge would see it.”

*Collins and Evans classify as ‘First Wave’ (and dismiss as inadequate if not wrong) those early studies in the sociology of science that sought to delineate what was different or special about scientific knowledge production, for example Robert Merton’s idealised norms of modern science.