Interview: Lisa Garforth on Green Utopias: Environmental Hope Before and After Nature 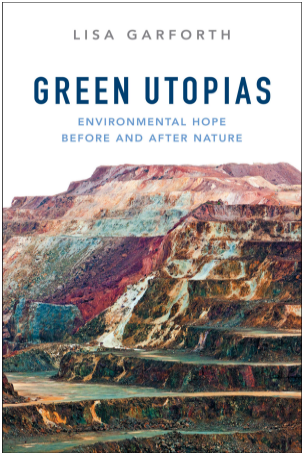 Lisa Garforth is Senior Lecturer in Sociology at Newcastle University. Her work explores green future visions, especially in fiction. Her recent book Green Utopias: Environmental Hope Before and After Nature (Polity 2018) examines the changing content and socio-cultural contexts of green utopias from post-war environmentalism to the challenge of the Anthropocene.

What lead you to write your book, Green Utopias, and what are the major themes?

I wanted to rethink environmental utopianism, not so much from the perspective of practical utopias and activism, but focusing on the big ideas and animating visions which imagine the different ways that humans might live with nature.

The utopian tradition of literature and political thought, particularly radical ecological political thought, is rich in ideas about what we ought to do to be more sustainable. One of the most powerful expressions of this was the post-war European and American environmental movement of ‘saving’ and ‘returning’ to nature, of decentralizing societies and moving away from industrial or technocratic forms of society. Those ideas are very exciting and powerful, but very utopian in the sense that they are not pragmatic or realistic at all.

Those ideas also become more problematic in the early 2000s when climate change developed from an important but relatively minor element of environmentalism to becoming the only point of discussion on environmental futures. The government spoke about the causes and risks of climate change, the Stern Review outlined economic risks and threats, and Al Gore’s film, An Inconvenient Truth was released. This clustering of events caught a lot of social scientists on the back foot, because it hadn’t been a particularly prominent aspect of their thinking, and made us rethink our theories about what it might mean to save nature after humans had already irrevocably transformed our environments.

The subtitle of the book, Environmental Hope Before and After Nature, refers to this idea that after climate change we need to rethink the earlier ecological ideas we had about greener futures. Ideas about saving or going back to nature are problematic because we know now that nature is not a ‘thing’ that is separate from us; we’ve changed it and it’s acting back on us in very powerful ways. That changes the way we think about nature, about futurities and temporalities. What would it mean to have a greener society or to protect nature after there is no nature to save, and when it can’t save us either?

Environmental arguments and philosophies are predicated on looking forward, about threats and projections, about what we’ve done, and how that’s going to affect us as a society into the future. With climate change, that sense of futurity starts to fall off a cliff. There’s something strange and difficult for a social theorist about looking ahead when there is damage already in train, inevitable, with climate change: past actions are shaping the very conditions of possibility of the future. We’re now trying to ask people to change their actions when the atmospheric damage is already done, and the effect of which is going to happen whatever. There’s something potentially quite fatalistic and deterministic about that, which is hard to think about.

What is the meaning and challenge of the Anthropocene?

The story of the Anthropocene is partly about a changed external world, partly about who humans think we are, partly the idea that the external world has changed because we’ve changed it, and it might change us, and it’s about who humans think they are now in this world. In what we now call the environmental humanities and in eco/climate fiction there’s been a very nuanced and swift responsiveness and liveliness about this idea of the Anthropocene. Here it has quickly become not just a scientific moment or geo-physical shift, but an imaginative way of understanding what humans are now in a changed world and how we might have to become ‘posthuman’.

There was a very powerful logic in the 1970s and 1980s, that in the postindustrial technical world, you could in principle still imagine saying “stop” to technocentrism and environmental degradation, and that the threat of catastrophic environmental damage was still preventable. The point of the Anthropocene is that because that moment has passed, we need to now think about what it means to be hopeful and utopian against the background of being in the middle of something that has already changed and will change the future. There is no going back, no redemption, no recovery of having an untouched nature. We’ll have to work with what we’ve got, which will be a hybrid, complicated mesh of technology, social and political decisions, and concerns about what the environment is going to do to us, because of the way it’s been reshaped by human activities. This is a different place to start utopian thought from.

What is it about science fiction that interests and inspires you, and how is it used as a device in your research?

We desperately need visions of hopeful futures, though I’m not sure sociologists need always to be the people imagining them! I think we could do more to work productively with the fictional imagination to explore different possible societies with nature, in the way science fiction (SF) writers are already doing. SF writers are imagining future societies often in a very thoughtful, reflexive way. They can offer a version of fictional sociology, and the challenge for sociologists and social theorists is to have a dialogue with that fiction. One of the arguments I make in the book is that there is scope for us in sociology and the social sciences to draw on this fiction creatively as we map environmental presents and imagine possible and probable futures.

I am a sociologist by training, but I work a lot in utopian studies as well. I think it’s probably the case that political philosophy and literature have been better at articulating alternative visions of green futures than any social science text has been. We really need to be aware as sociologists and social theorists that we don’t ‘own’ useful social knowledge and there may be disciplines and ways of imagining that are better able to open dialogues about concretely different kinds of social futures.

There is also a lure and potential value of apocalyptic thinking in relation to climate change. Social scientists have been quick to worry that one of the major responses to climate predictions is a narrative of impending apocalypse, and that this is a form of conservatism and fatalism in culture and politics. But what apocalyptic thinking can do also is to imagine a break, or a restart, a means of recovering different human values. That has been a frequent trope in science fiction, utopian and dystopian fiction, where apocalypse can be linked to social critique, creative future visions.  And often sociologists don’t understand that. And SF and utopian fiction are also really good at imagining the continuity of hope even after terrible events or in awful circumstances; their characters are still battling away for a more hopeful future even when the social fabric is threadbare – Kim Stanley Robinson, Octavia Butler, and Paolo Bacigalupi are particularly good at this. And cultural theorists like Stefan Skrimshire and Frederick Buell have written powerfully about the value of apocalypse as a fictional device for helping us to think about social, political, and environmental predicaments.

What are your other current and future research projects?

As part of an AHRC-funded project, I’m working with colleagues at Universities of York and Aberystwyth, on a project called Unsettling Scientific Stories, which looks at how readers negotiate science and social futures through engagements with SF. We use SF as a mode of socio-historical analysis; to look at past visions of the future, along with the knowledge, methodologies and predictions of the time, and think about how this fiction creates possible futures. It helps us to understand science in terms of how it’s driven by visions of what the future might look like at different times. Using the images, stories and ideas found in SF about what the future might look like, we think about the differences between history, sociology, and SF and how these disciplines do different kinds of futurology, and how we can develop new strategies for understanding how contemporary orientations of our common future are configured.

In particular, I’ve been working with a film studies and science researcher now at Manchester Metropolitan University, Dr Amy Chambers, to try and understand how readers think about scientific futures through SF. We’re curious about what readers think about themselves and their world and their future when they read. We’ve run focus groups with readers, including lots of biographical interviews with SF readers, and it’s been fascinating to learn about their lifelong engagement with the future, as readers. I’m interested in peoples’ everyday practices of social reflection and critique, how they use narrative to reflect on their social worlds, as well as expert sociological knowledge. I’m now working with Dr Miranda Iossifidis at Newcastle to do more work on SF readers, this time looking at online reading groups and discussions, as a social, critical and creative practice for engaging with science, technology and social change.

I love literature, my interest in understanding the social came as much from novels as it did from inspiring sociological texts. What you get from a novel is often an affective, felt, lived, sense of the commonalities and differences in people’s social worlds. There’s a shared set of theories and ideas across the social sciences and humanities, and this is about thinking about how novels work on the social through us as readers. So I’m really interested in how as sociologists we can work WITH not just ON fiction, to position ourselves as partners in a dialogue with non-academic sociologists who are thinking along similar lines, often using fictional and science fictional forms.