Can green norms cross borders? The experience of Chinese students in the UK.

Much academic literature has been written about behaviour change. The traditional, ‘common-sense’ view is that attitudes precede behaviours, as stated in Azjen’s Theory of Planned Behaviour (TPB). This model has influenced policy-makers to seek to change citizens’ behaviour by simply providing information or providing feedback about the impacts of behaviour – on outcomes like our health, personal finances, the wellbeing of others, or the environment – and then hoping that enlightened citizens will do the rest.

But this ‘ABC’ model of behaviour change (Attitudes->Behaviour->Change) model has come under criticism because, in reality, we often see a gap between what people think or say they should do, and what they actually do. This attitude-behaviour gap is sometimes explained by Social Practice theorists who highlight the ‘stickiness’ of practices (the ways we eat, work, travel, take holidays, socialise etc) which are slow to change, due to complex cultural or technological barriers.

Others point to the need for ‘opportunities’ to be green. We can want to change as much as we like, but unless there is, say, decent public transport, we’ll keep our car. Without recycling provision by the state, we can’t recycle.

Elsewhere, psychologists point to ‘cognitive dissonance’ to explain why we often know our behaviour is ‘wrong’ but we do it anyway – because, essentially, when our beliefs and our actions are inconsistent, we invariably adapt our beliefs rather than our actions, to make us feel better about ourselves. We re-align what we think with what we do, not the other way round.

One way out of this depressing impasse of good intentions and no behavioural change is presented by windows of opportunity which arise when important changes in the life-course come along. Research by Ver Planken and others has shown that when people have a baby, change jobs or move house, such events can be an opportunity for good intentions to be converted into new forms of behaviour. Habits get shaken up, practices change, and new opportunities to be ‘green’ can come around.

In this project, I teamed up with two colleagues from Southampton University (Tristan Berchoux and Kun Xiang) and Xu Yiyao from Xiamen University in China to look at one increasingly common life-course event: Chinese students studying in the UK, and whether that ‘window of opportunity’ actually changed their green attitudes and/or behaviours. 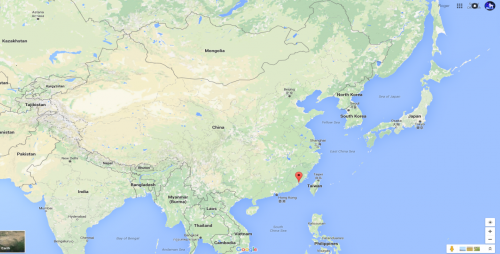 The red marker is where Xiamen is, in between Hong Kong and Shanghai. 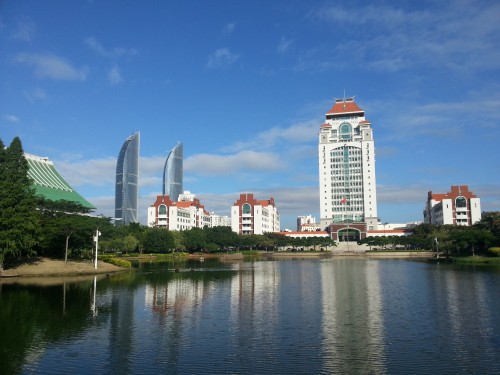 Our comparison groups confirmed what we already suspected- that UK students were far more exposed to ‘green norms’, and had experienced years of education about why we need to care for the environment, and how we as individuals can do our bit. In contrast, the Chinese students described China as being environmentally ‘permissive’ in their lived experiences: littering is common, recycling is often not done properly (or at all) with few repercussions, lights are left on and energy is wasted. According to the post-materialist thesis proposed by Inglehart, this is exactly what we might expect when we compare a developed and developing country. Using that data as a baseline, we were then able to examine how coming to the UK affected Chinese students green attitudes and behaviours. What we found was that Chinese students did change their behaviour, in terms of things like recycling, not dropping litter, and saving domestic energy.

The views of Xiaoke (22-year old female Chinese postgrad in Southampton) were typical:

“I think the issue is group psychology. In China if everyone just throw litters around and you put it in your pocket, it’s weird. But here everyone put it in pocket, then you won’t throw it around. It’s much like we say ‘thanks’ or ‘sorry’ more frequently here. Big social environment is important.”

Interestingly, we found that Chinese students studying in the UK did not show any signs that they had changed their attitudes to the environment. The reasons for changing their behaviour seem to be part of a desire to ‘fit in’ with their UK friends directly or with the expectations of UK society indirectly – a process which the migration psychologist John Berry calls ‘acculturation’ to a host culture.

In another exchange, Di (a 20-year old Undergraduate in Southampton) talked about the “Blackout,” an annual event at Southampton Uni where students and staff are encouraged to turn off all electrical appliances and lights for one night, to promote the idea of energy-saving. Her participation seems to have been due to wanting to be involved, rather than any engagement with the reasons behind the event.

“I knew this event but I forgot about it until I noticed the event in Facebook, and I suddenly I realised it was today’s event. So I went out of my room to check if every room is black, ‘cause I was so afraid that I didn’t do so, so I just turn off the light even though I was still in my room.”

Interviewer:  “So you were ‘black in’”

Di: “Yes. I think this is a kind of social pressure for me. Actually I didn’t know whether people were out or just click yes in Facebook, but still in room.”

Of course, it’s possible that the Chinese students simply lacked a vocabulary to discuss green attitudes (not in a linguistic sense, as their focus groups were conducted in their native Mandarin with one of my Chinese research colleagues), or that they had ‘absorbed’ green attitudes unreflexively. But from our data, this appears unlikely. The findings tentatively show that, in contrast to the ABC model, green behaviours can arise without a reflexive engagement with green attitudes. Instead, they seem to arise for student migrants due to powerful and possibly unconscious desire to conform with a host culture’s social and environmental norms.

The obvious next steps would be to try and generate more representative data through more quantitative methods, and to track Chinese students on their return home after their study sojourn. Longitudinal research might show us if these green behaviours ‘learnt’ in the UK actually persist in the China context, or not. With over 100,000 Chinese and Hong Kong students coming to the UK every year, and then returning to possibly constitute the future Chinese Elite, the potential is obvious. The internationalisation of higher education, and global environmental degradation are two big contemporary social themes. By linking them in academic research, we might find that the former can help us learn how to deal with the latter. 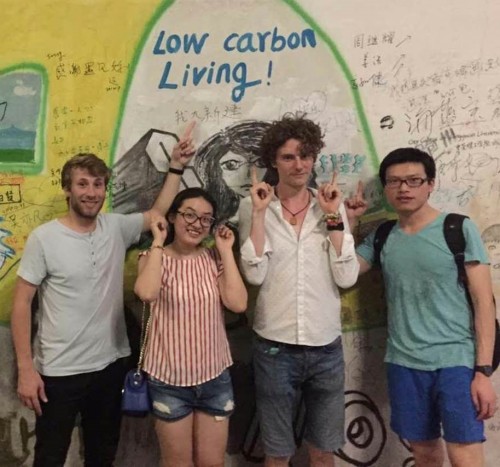 This research was facilitated by the Southampton ESRC Doctoral Training Centre, to whom we are extremely grateful.