Immigration and the Limits of the Criminal Justice System 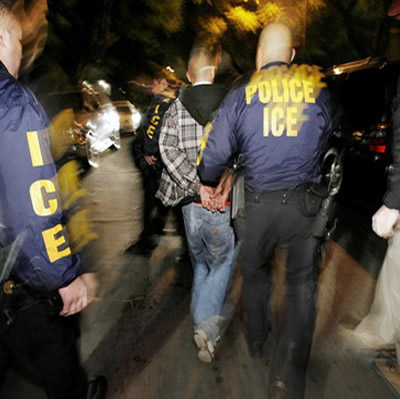 Candidate Barack Obama promised to enact immigration reform in his first term.  That promise is almost certain to go unfulfilled.  The result of years of heated debate has been deadlock between two seemingly irreconcilable positions.  On one hand, many in congress support a “path to citizenship” for undocumented workers and increased legal immigration.  On the other, a substantial number argue for greater border enforcement, mass deportation, and decreased immigration.  While the status quo has virtually no vocal support, systems create entrenched interest no matter how much everyone claims to despise that system.  Furthermore, the deadlock may have entrenched a dominant discursive framework that impedes reform.

While there has been no major changes to the immigration system, there has been stepped up enforcement of immigration laws including more border security, more detentions, and a record level of deportations.  In reaction to the federal government’s “inaction,” several States have passed their own immigration laws.  This DIY State-level approach faces several court challenges and may be unconstitutional.  In addition, local business elites have begun to mobilize against this tactic for fear of negative press for their state or for their brands.  Still, the current trend is for the federal government to appropriate greater sums of the nation’s resources to propping up the current system.

Experts note that the current policies have failed, and are indeed destined to fail (Golash-Boza 2009).  Stricter enforcement has not reduced illegal entry or the number of undocumented workers.  The United States continues to pursue failed policies and in effect perpetuates an immigration system that is misaligned with economic realities.  The scant economic opportunities in, for example, Mexico and the labor needs in the US are not addressed by the criminal justice approaches currently employed.  Yet criminal justice rather than economic policy remains the focus on immigration.

Instead of reducing illegal immigration, these approaches have created what Tanya Golash-Boza (2009) calls an “immigration industrial complex.” Golash-Boza (2009) notes how the media, politicians, and private interests profit from the current system.  From the cable news show hosts who have made careers out of xenophobic fear-mongering (e.g. Lou Dobbs) to the sensationalist news casts that hype dramatic anecdotes about crime, there are certainly beneficiaries of the status quo in the media.  In addition, politicians have invoked the specter of “illegal immigrants” to scapegoat migrants for larger social problems like unemployment or crime (both of which have little to do with immigration).  Finally, an array of private contractors now profit from the current system – particularly private prison corporations.  The involvement of private prisons adds, to the theoretical linkages Golash-Boza explores, a direct link between an immigration-industrial complex and a prison-industrial complex.  The political discourse surrounding immigration provides another link between criminal justice frameworks and immigration and I believe another impediment to change.

Barack Obama promised to support “a system that allows undocumented immigrants who are in good standing to pay a fine, learn English, and go to the back of the line for the opportunity to become citizens.”  Obama’s rhetoric feeds into the idea that undocumented workers are criminals (must pay a fine), do not want to assimilate (must learn English), and have unfairly usurped other law-abiding people’s rights and now must “go to the back of the line”.  Advocates for immigration haven’t challenged these precepts because fines would not be that large, learning English is something most would welcome, and finally, because there is no “line” for many of the backbreaking low wage jobs the bulk of undocumented workers currently perform.  However, the insistence that the system is broken and the laws unjust seems at odds with the implied blameworthiness of individual migrants.

The alternative to a “path to citizenship” remains impractical.  The cost of “sealing the border” and mass deportation are prohibitive and the operation is unlikely to succeed even in the short term.  Indeed, a criminal justice system approach is unlikely to accomplish little more than entrenching an immigration-industrial complex.  The current political framing, while perhaps an attempt at common ground, may rely too heavily on criminal justice framing to deal with the broader economic forces behind migration flows and serve only to constrain a necessary public dialogue concerning economic policy and migration.

Tanya Golash-Boza – A Confluence of Interests in Immigration Enforcement: How Politicians, the Media and Corporations Profit from Immigration Policies Destined to Fail

Immigrants are Subject of Tough Bill in Georgia

Immigration is Lead Topic as Leaders are Gathered