Don't Quote Me On This! 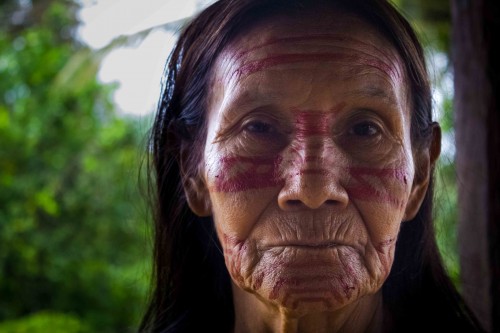 Here is a photo I took of an elderly woman in Jandiayacu. She is one of very few people (possible only five remaining) who speak and have a deep knowledge of the Sapara Language. The knowledge of Sapara people is not written down; it is an oral tradition that has been recognised by UNESCO as a Masterpiece of the Oral and Intangible Heritage of Humanity.

I am not going to cite, quote or reference anyone in this post, and I wonder if that will change the opinion of those who read it. Does citing someone else make what I write more valid, more accurate or more valuable? Citation and referencing are an important part of academic writing; it is a painstaking, laborious and often frustrating process that is, unfortunately, unavoidable. Of course, I understand why it is necessary. When communicating ideas or concepts it is useful to use citations to provide signposts to our readers should they want to know about something in more depth or detail. It is also important when we are talking about ‘facts’, particularly historic occurrences, statistics or things people have (supposedly) said. But there is another side to this practice that is more of a burden on the writer than it ought to be.

I have terrible paranoia when it comes to plagiarism, and I know I am not alone. After submitting my dissertations for my undergraduate degree and both of my masters degrees I remember having an awful feeling that on results day I would collect my grade and see the dreaded zero. Months of hard work and emotional and physical exhaustion would have been wasted and my career would obviously be ruined. None of my other achievements would matter; I would forever be known in academia as a fraud, a cheat, a plagiarist.

I would express these concerns to family and friends and I would talk to fellow students about it, too; many of whom felt the same. Inevitably, people would ask me ‘do you think you have plagiarized someone?’ or ‘did you make sure you referenced properly?’ the answers to which were always ‘of course not!’ and ‘I think so?’ but this didn’t shake the feeling. I always thought I would be caught out, that I would have made some silly mistake. I might have paraphrased someone in a manner a little too similar to the original quote and accidentally plagiarised them. I would spend hours reading my work, checking and rechecking each sentence I had written. I would over cite everything, often using more than one reference for each sentence, just to make sure.

I ended up resenting the practice, and I felt like I was restricted to only thinking things people had thought before or, more specifically, had written before. If I came up with an idea that I genuinely thought was my own, I would search and search for someone who had said it (or something similar) before, and if I couldn’t find a source I would sometimes omit the idea altogether because it was safer than taking the risk of saying something ‘new’ and accidentally plagiarising. With the vast amount of information that exists in the academic world it is impossible to read everything, even everything that is directly related to your own narrow field of study. If you are an interdisciplinary academic (as I am), it is even more difficult. So, why do we bother to cite anyone at all? Well, the ‘good’ reasons are those that I mentioned above (i.e. signposting, backing up ‘facts’ and attributing quotes), but there are other reasons, too, that really don’t benefit the writer or the reader very much at all. I believe it is based in the general acceptance that ideas people have are owned by them and that valid knowledge is always written down, which is problematic for a number of reasons.

First, the belief that people who write academic work are in any way creating something independently is a fallacy.  All researchers and writers are part of a wave of academic consciousness, a collective thought process that we are all immersed in and interact with through a continuously iterative process. What researcher, for example, has never had a moment of inspiration where their work has sparked a new idea, something they have never read (or at least don’t remember reading) in anyone else’s work, which is followed by a quick Google search that immediately reveals that someone else has said the same thing, almost word for word! Why should a person be credited with an idea just because they had it first? The answer to this, in my opinion, is related to how we view ownership in general in the capitalist world. The belief that people can own ideas, and that once that idea is written down (in an academic form) they can own it forever, can be viewed as a patent or a licence for an abstract concept. Meanwhile, we ignore the collective consciousness of society or groups of society, instead dividing knowledge into easily controlled, ownable and tradable units.

This leads to the second ‘bad’ reason to cite and reference excessively. In our culture it is believed by many that the thoughts, opinions and ideas of people who have respectable academic credentials are more valuable than those who are outside of the (western) academic world. This perpetuates the idea that certain types of knowledge, i.e. academic knowledge, are more valuable than others and underpins the social construction of so-called ‘experts’. Often we cite dead white men in an awkward and forced way to show that the point we are trying to make is valid, rather than explaining precisely what we mean because we don’t have a ‘good’ source. What this does is reinforce hierarchical structures of society in which many ways of creating and expressing knowledge are discredited and relegated to the realms of obscurity. In this, we are doing ourselves and our academic colleagues a disservice. What, if not the synthesis and critique of all available knowledge, is academia after all? Moreover, it is a burden that restricts some writers more than others. Beginning my research with indigenous people (the Sapara, who have no written history, but whose culture and language are recognised by UNESCO as a ‘Masterpiece of Oral and Intangible Heritage of Humanity’) has been a stark reminder of this. How can indigenous knowledge be cited by indigenous researchers and/or researchers who work with indigenous people? Of course, interviews, life histories and ‘myths’ can be cited, but when these contradict ‘official histories’ (i.e., those that are written down) I wonder which account people (including me) are most likely to believe.

The third and final reason I am going to mention (though there are many more) is that having a reference does not always mean something is ‘true’, particularly since many types of research have become electronic pursuits. The truth is, if you want to say anything (no matter how absurd or poorly thought out it is) you can probably find a reference for it somewhere on the Internet. Among the hundreds of thousands of publications that are available, academic or otherwise, there is a constant and wrongful process of self-legitimization. For example, if one researcher includes a citation from a newspaper article or blog that was incorrect or inaccurate in an academic paper it can then be cited by other researchers as a ‘fact’. Moreover, if a study is conducted and the resulting paper is cited, and then another researcher cites that paper and so on ad infinitum, the original meaning can go through a process of change, corrupted by the point each author is trying to make and their own way of interpreting the data. The result is a loss of quality of ‘data’ and an alienation of the information from its original context.

These issues with citation and referencing do the opposite of its intended purpose. Rather than leading to robust, good quality research it instead restricts writers’ ability to think freely and write honestly. It reinforces social constructs of what constitutes legitimate knowledge yet allows information and data to be removed from its original context and meaning. This has a greater impact on researchers who work on the fringes of academia, particularly indigenous researchers, than it does on those who work within the established mainstream.

Of course, I am not saying that citation does not have its place (it is undoubtedly an important part of creating and sharing knowledge), nor am I saying that plagiarism is acceptable. But those who are truly plagiarising, cheating on essays, dissertations or theses, or claiming other people’s work to be their own are finding faster, more efficient ways to hide what they are doing and avoid being detected by the increasingly sophisticated plagiarism checking tools. Methods used include automated thesaural or synonym apps, removing or obscuring the text layers in pdfs, or plagiarizing exclusively from articles in other languages. I find this to be quite repellent behaviour, not necessarily because they haven’t cited people, but because it is just outright dishonest and is an attempt to gain credit for something that has taken little or no thought or effort. Moreover, it adds nothing to our existing knowledge and reduces the perceived value of the hard work put in by others. Nonetheless, how and why we cite our work should be subject to the same critique and analysis that we in academia claim to use in all other areas of our research.