Legislation and identity politics: The case of France versus Muslim women and the facial veil 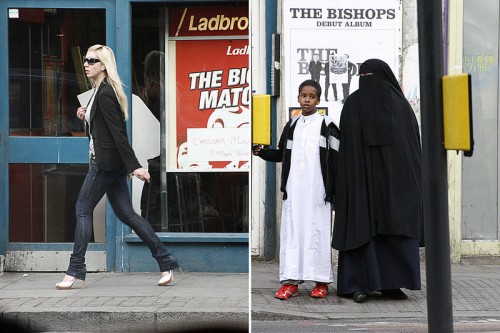 As any respectful Western feminist knows, meddling in the affairs of non-Western women is a theoretical faux pas. Concerns, of course, are one thing, but condemnation outside of historical and cultural contexts, or “border crossing” has been ruled as downright oppressive (see Chandra Mohanty, Gayatri Spivak and Uma Narayan, among others). Issues such as genital mutilation have been fiercely debated among feminists, focusing more on the matter of Western normalizing judgment than the act itself. Discussion over the Muslim veil is another hot-button issue, and with the recent steps that France has taken to ban its adornment (specifically, those that cover the face) in public, it appears that legislation may temporarily replace feminist rhetoric surrounding the debate.

According to an article in The New York Times: “The draft bill says that ‘no one can, in the public space, wear clothing intended to hide the face’. The bill also defines ‘public space’ broadly, including streets, markets and private businesses, as well as government buildings and public transport. A fine of $190 will be imposed on those wearing the full facial veil, and anyone who forces a woman to wear such a veil will be punished by a fine up to $38,000 and a year in jail, doubled if the victim is a minor.” Further, the article reports that the bill is being defended (by the parliamentary leader of Mr. Sarkozy’s party) “on the grounds of public security and as a vital assertion of French identity and values.” The article later quotes Mr. Sarkozy as stating: “The burqa is not welcome in France because it is contrary to our values and contrary to the ideals we have of a woman’s dignity.”

Interestingly, this government-based identity policing appears to be the actualization of the controversial sentiments of some (not all) non-Muslim feminists – but not the culmination of their work. Instead, the French government has developed their own definitions of “women’s dignity” and decided that a Muslim woman wearing a facial veil does not fall into that category. Unfortunately, because the French government does not have access to all the individuals that adorn facial veils in their country, their assessment that this practice is contrary to “women’s dignity” is a generalization at best. In the end, one doesn’t have to weigh in on the Western versus non-Western feminist debate over the facial veil to recognize that this proposed ban is an extension of policing gender veiled (no pun intended) as “protection” from fundamentalist-based, or Other-based, practice. Unfortunately for France, banning a “public” extension of religion such as dress will not alter the “private” practice of those being policed. According to The New York Times, the French Senate will vote on the bill in September.

“Feminism and the Women’s Movement: A Global Perspective” from The Blackwell Companion to Social Movements