In his newest book, Elijah Anderson turns his micro-sociological attention to those places in the modern US city that foster racial understanding and harmony. In The Cosmopolitan Canopy Anderson claims that a pluralistic embrace of social difference is supported most readily by the titular “canopies” that he explores in contemporary Philadelphia. Over the span of an astounding thirty years of observation, Anderson attempts to convey an image of how people “live race” (xvi) in ways that challenge old forms of inequality. 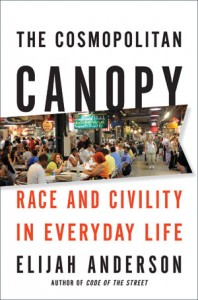 Anderson describes spaces in the city where people characterized by wide a range of social differences interact in a familiar way on neutral ground, opening the opportunity for an expansion and revision of how individuals view members of other social groups. In Chapters 2 and 4 he introduces readers respectively to the Reading Terminal and Rittenhouse Square—both of which exemplify this attitude of civility and racial cosmopolitanism. Anderson acknowledges, nonetheless, that Blacks under the canopy can be made to feel “provisional”—these are the moments wherein the “possibilities and limits of cosmopolitanism as an organizing theme of public life” are made most plain (157). In “The Color Line and The Canopy” (Chapter 5), Anderson relents from his optimistic view of social life to demonstrate how both latent and more overt forms of racial discrimination, especially at work, threaten the civility of the canopy.

Here he introduces his usage of Goffman’s “gloss” to describe the niceties engaged in by human actors in order to make possible complex interactions with a large group of relatively anonymous people. For Anderson, moments of breakdown in racial civility—what he and some participants call “the nigger moment”—demonstrate the (spatial and temporal) points in social life where the gloss wears thin and racial animus is foregrounded. After reading this book, I was struck by how perennial this tension appears in Anderson’s description, even under the canopies where such gloss is supposedly replaced by more earnest interracial contact.

Anderson (186; 189) explains this with two sets of interactive orientation that characterize citizens of the canopy: the ethnocentric and the cosmopolitan. Ethnos and cosmos are worldviews—packed with cultural assumptions and their related identity projects—for responding to interracial encounters in public space. Whereas folks who adopt the ethno view are more wary of cross-racial contact and remain vigilant for evidence of conflict or unconscious slights by others, those using the cosmo frame are generous in their interpretation of those hiccups and champion the visible progress made in race relations. These orientations appear on a continuum, and individuals may oscillate between the two based on the needs of the situation at hand.

It  appears to me that the “canopy” to which Anderson refers is not continuity across the city, but an uneven patchwork of cosmo zones. The ethno zones are rendered in Anderson’s analysis as moments or sites of breakdown; positioned through Anderson’s language as arcane hold-overs from a more nasty racial era, or slippages in an otherwise progressive urban social order. Instead, is it not possible that cosmopolitan canopies represent those zones where the virtues of tolerance and cultural pluralism are most intensified? Whether the ethnos or cosmos dominate the cultural order of the city overall is likely difficult to say, but Anderson makes it out to appear as if moments of the ethno frame are now the exception. When he writes that Blacks who take on the cosmo view must often “bend over backwards” (205) to avoid a racialized interpretation of bad service or judgmental looks, however, Anderson indicates his own awareness of how tenuous the canopy can be.

Anderson’s notion of the canopy is evocative of Oldenburg’s (1989) description of the “third place:” those city spaces apart from domiciles and work environments where the tensions and differences that pervade our lives are suspended in favor of a free exchange among citizens. Like Oldenburg, Anderson’s view is arguably optimistic. Though our roles are more clearly defined and instrumental when in the realms of home and work, it is naïve if not dangerous to conclude those identities and the exchanges they enable are ever unfettered from social norms (especially in the form of Goffmanian interactive lines). Cultural difference and social power seeps into even these jovial and relatively easy exchanges. Cosmopolitan canopies might only appear to be bastions of openness and civility because they are so exclusive in their arrangement and design as to preclude the majority of socially undesirable people from even bothering with attempts at entree.

The Cosmopolitan Canopy is, criticism aside, as eminently readable and thoughtful as one expects from Elijah Anderson’s work. His careful way of dissecting the interactional dynamics that produce, support, and challenge racial difference is astounding. What I found most amazing was the glimpses of Black service workers in those parts of the canopy where Whiteness asserts itself most viciously as the dominant cultural form: the hostess at Rouge, the doormen in Rittenhouse Square, and the security guards in the Center City office building. That’s where Anderson’s magic lies: in offering vivid glances into the often-obscure mechanics of social life.