Holding Up the Women Who Hold Up Half the Sky 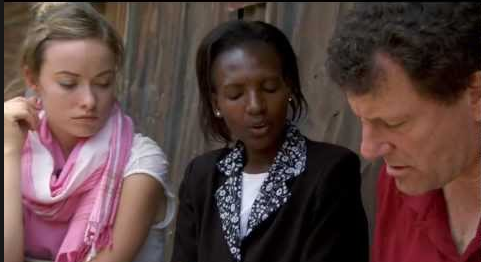 Recently, Netflix added the widely acclaimed documentary Half the Sky to its online streaming library.  The film, inspired by journalists Nicholas Kristof and Sheryl WuDunn book of the same name, follows six American celebrities as they travel throughout Asia and Africa addressing some of the health care, educational, and economic issues that oppress women and girls across the globe. Throughout the film, the viewer clearly sees the impact women and girls of the developing world have on both Kristof and the celebrity activists who join him in Sierra Leone, Cambodia, Vietnam, Somaliland, India, and Kenya.

What is even more striking is the difference between the lives of the women featured in film and the actresses visiting from the West.  At one point Kristof and actress Olivia Wilde are interviewing a former sex worker living in Kenya who is struggling to come up with the money needed to pay for her son’s tuition.  When Kristof asks her what she will do if she cannot raise the money needed the woman simply relies that she will not eat.  The conversation moves forward to other issues in the woman’s life and the viewer never finds out if the woman was able to pay her son’s tuition.

My first reaction to the scene was to wonder if the Pulitzer Prize winning author, columnist, and editor and actress/model with a net worth of $12 million provided the struggling mother with the $80 needed to pay her son’s tuition.  I wondered if the women featured in the documentary received any financial compensation.  I found myself wondering if it was Kristof or Wilde or some high ranking executive responsibility to help this woman.  What does $80 mean to them?  And yet, I know $80 really cannot fix the problem.  In a short amount of time there will be another bill that needs to be paid.  Who will help then?  Will it always be Kristof or Wilde’s responsibility?

This particular scene was hauntingly familiar to me because I continue to struggle with my responsibilities to those I met while volunteering in a developing country this summer. One of the challenges of development work is determining what you can and cannot give to a community.  In many cases, volunteers wrestle with their knowledge of life in the global north and the desire to make a difference in a poverty-stricken area.  This becomes even more difficult when volunteers begin creating relationships and bonds with individuals living in the host nation.

It is not uncommon for local residents to assume their Western friends will pay for drinks, meals, or transportation when spending time together.  Even requests for mobile phones, assistance with school fees, or small loans are not unheard of or even uncommon.  In many cases, volunteers cover the costs of these items willingly and without question.  For most, it is only when requests become excessive or expected that volunteers begin to question the economic limits of their relationships.  The question of how to create appropriate boundaries within the context of clearly unequal power relations can be a source of anxiety for volunteers.

While the complexities involved in developing relationships with individuals living in developing nations might be surprising for first time volunteers, it is a well-known conflict for those doing development work abroad.  Upon arriving in Nepal, I was given an orientation that included a short lecture on the “dangers” of making friends with locals.  I was informed that friendships with members of the community were often messy for Westerns and it was best to spend my time with other volunteers.  Since I was also cautioned to avoid meeting local men in pubs and restaurants, I somewhat disregarded all the advice given to me on this topic thinking it was the remnants of racialized fears about the ‘primitive’ hypersexuality of non-Western men.  It was only as I became closer with local women that I began to understand “messiness” of global relationships.

I have not managed to tease out the best mechanisms for navigating the economic power dynamics between first world and developing world interpersonal relationships.  I do know that there is no way to create a more egalitarian global society without those in power being willing to give up some of their privileges.  For me, I chose to pay for all the drinks, meals, and transportation when spending time with my Nepali friends.  I did not provide funds for laptops or mobile phones even when my friends repeatedly asked for help.  Rather, I donated some money to the organization I worked with and I agreed to return to do more volunteer work.  This was the line I drew for myself.  However, I know this line is fluid and I believe it will move back and forth the longer I continue to work in the developing world.

Devereux, Peter. 2008. “International Volunteering for Development and Sustainability: Outdated Paternalism or a Radical Response to Globalisation?” Development in Practice 18(3):357–70.