What’s the meaning of meritocracy in today’s politics? 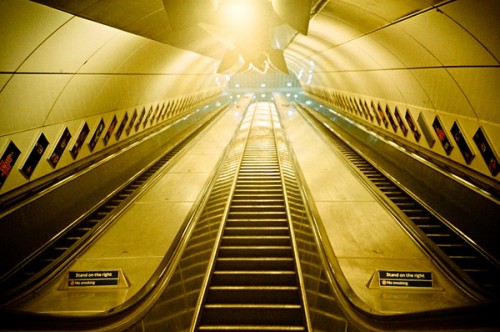 Meritocracy: a universally available golden escalator to a life of high status and luxury?

When Young (1970) conceived of the meritocracy it was a satirical device to draw attention to a possible dystopian future where everyone is stratified in concrete by their I.Q.: the sub-optimal intelligent condemned to a meaningless existence. The meaning of meritocracy has evolved (Allen 2011) to become a discursive device. Politicians from all major parties now clamour for the moral high ground by claiming making society more meritocratic is their political raison d’etre. The Deputy Prime Minister, for example said exactly that; “It’s the reason I do this job” (Clegg, 2012). Indeed meritocracy’s conceptual power is far reaching:

“Meritocracy as an abstract ideal is also a measure of progress, where more advanced societies are held to be those that are more meritocratic. They make fewer decisions based on prejudice and extend opportunity further. Meritocracy is sometimes used as a measure of corruption, where corrupt societies or corrupt institutions are thought to be those that disobey the formula: merit = ability + effort. Meritocratic societies are open and fair, non-meritocratic ones are obscure and underhand. Justice, social cohesion, progress, fairness and transparency, these are the timeless ideas upon which meritocracy is presumed to rest.” (Allen 2011, p2)

Yet despite the political conviction supporting the meritocracy, according to the most recent “State of the Nation” report written by the government’s Nation Social Mobility and Child Commission:

“The most talented in our society are not getting equal opportunities to access the top, which is disproportionately dominated by the most advantaged”

“Merely a coincidence that the common idea that we live, or should live, in a meritocratic age co-exists with a pronounced lack of social mobility and the continuation of vested hereditary economic interests.” (p53)

This is because within the discourse of inequality the concept of meritocracy has been appropriated and shaped by neo-liberal ideology. For Foucault (2010), neoliberalism’s project is “the overall exercise of political power modelled on the principles of a market economy” (p131). Moreover, “the only ‘true’ aims of social policy for neoliberalism can be economic growth and privatisation; thus the multiplication of the ‘enterprise’ form within the social body” (p148). Neo-liberals want us to believe if we are sufficiently empowered, incentivised and aspirational we can and should transform or transcend our class of conditions through individual enterprise. The responsibility to act and the blame for failure falls upon the individual. As economic elites experience unyielding compound growth in their incomes we are force fed success stories that imply inequality is our fault:

So, meritocracy has transformed from a satirical device for highlighting increasing inequality to become the moral justification for neoliberalism while politicians claim to address inequality but, in effect, they only tinker with its mechanisms.