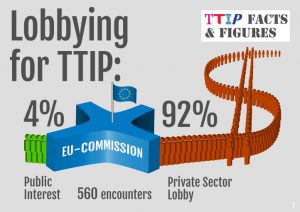 Many Sociology Lens readers will by now have heard of ‘TTIP,’ the Transatlantic Trade and Investment Partnership currently being negotiated between the EU and the US. The TTIP negotiations are the direct outcome of a transatlantic High-Level Working Group on Jobs and Growth established in 2011, and the latest in a string of attempts to create an EU-US free trade zone that date back to the early 1990s. Thus far the two issues garnering the most media attention around TTIP have been the lack of transparency surrounding negotiations, and the proposed inclusion of ‘Investor State Dispute Settlement’ (ISDS) provisions in the Partnership. Regarding the transparency issue, when even supportive Members of the European Parliament such as Maria Eleni Koppa complained that they were ‘totally in the dark’ about the negotiations, there were calls for the negotiating mandate to be declassified – precipitating UK Trade Minister Lord Livingston’s curious claim that this was ‘unnecessary’ since the document had already been ‘leaked’ online. But it is in regard to ISDS that the TTIP battle lines are being drawn in earnest.

Ask Michael Gove MP, the UK’s former Education Minister, and he will tell you that campaigns against the inclusion of ISDS in TTIP – by groups such as War on Want and 38 Degrees – are little more than ‘scaremongering.’ There is no need to worry about ISDS because, as stated in the fact sheet he provided to MPs before a recent parliamentary debate on TTIP, the UK has never lost an ISDS case. But is that reason enough to feel thoroughly relaxed about a process that the LSE’s Robert Wade recently described as an instrument that ‘fundamentally tends to undermine national sovereignty and the accountability of governments to citizens’ by enabling ‘foreign companies to sue governments directly – before secret, extrajudicial tribunals – for cash compensation over earnings lost because of national social, health or environmental legislation, and even for loss of “expected future profits”’? For one thing, as the US government is equally keen to boast, neither has it ever lost an ISDS case! So why ISDS?

Both the World Development Movement and Friends of the Earth have expressed concerns that ISDS is, as Wade suggests, essentially an instrument elevating the rights of corporations over those of sovereign nations. Attention is frequently drawn to Canada’s experience under NAFTA, where 63 claims (largely over environmental regulations that restrict the chemical and mining industries, but also over failures to grant patents for medicines of no proven value) have led to payouts of over $170m so far. As the World Development Movement’s Nick Dearden notes, these ‘could be the tip of the iceberg,’ made up of cases that ‘cost Canada a small fortune just to fight, are held in secret, and give no right to appeal.’ A similar fate may await the EU.

Blogger and technology writer Glyn Moody observes that even the EU’s own assessment of ISDS acknowledges the troubling nature of cases such as Swedish energy firm Vattenfall suing the German government for phasing out nuclear power after Fukushima – and Philip Morris making a claim against Australia over the move toward ‘plain packaging’ for cigarettes (a decision made on public health grounds). And the frequency and scale of global ISDS claims has only been increasing in recent years. Not only that, but Moody points to the EU’s own advertisement that ‘Total US investment in the EU is three times higher than in all of Asia’ and ‘EU investment in the US is around eight times the amount of EU investment in India and China together.’ So the UK has never lost an ISDS case, and neither has the US – and they are already leading trading partners. Presumably, someone is hoping to get something out of ISDS, and if it is neither the US nor EU member states, you could hardly be blamed for suspecting that certain corporations may have an interest in utilising it to challenge regulations made in the public interest, but which may impinge upon their ability to turn a profit.

But there are even more serious and less transparent political issues at the very heart of the TTIP process – in the model used to make the foundational claim that the Partnership would provide annual GDP gains of 0.3-0.5% for the EU, and 0.2-0.4% for the US up to 2027. It is this model that Ferdi de Ville and Gabriel Siles-Brügge take on in their recent Open Access article for New Political Economy, ‘The Transatlantic Trade and Investment Partnership and the Role of Computable General Equilibrium Modelling: An Exercise in ‘Managing Fictional Expectations’. Drawing on economic sociologist Jens Beckert’s notion that ‘fictional expectations’ (or ‘the suspension of disbelief’) are essential to organizing market activity in the face of uncertainty, de Ville and Siles-Brügge subject the Computable General Equilibrium (CGE) model used to make the claims about TTIP’s benefits to a critical analysis, and conclude that such ‘models themselves privilege certain interpretations of socio-economic interaction and can thus be used as tools to push a particular economic agenda’ (p. 7), obscuring political trade-offs and making environmental and social costs ‘disappear’. As a 2006 piece in The Economist argued:

Most empirical exercises confront theory with numbers—they test theories against the data; sometimes they even reject them. CGE models, by contrast, put numbers to theory. If the modeller believes that trade raises productivity and growth, for example, then the model’s results will mechanically confirm this. They cannot do otherwise [emphasis added].

At the heart of the economic claims made about TTIP’s benefits is a barely scientific, deeply politicised, profoundly antidemocratic modelling process that is all too often confined to a ‘black box’ and left uncontested. The 2008 financial crisis briefly placed financial modelling – especially CGE models’ close cousin, Dynamic Stochastic General Equilibrium (DSGE) models – under scrutiny (see these posts by Andy Haldane, Diane Coyle and Simon Wren-Lewis on DSGE and the financial crisis). Likewise, de Ville and Siles-Brügge’s productive sociological engagement with CGE models reminds us that ISDS is not the only ‘political’ aspect of TTIP. If the numbers themselves are little more than part of a process to conjure up a specific imagined future and press-gang it into reality, then the claims made about TTIP on the basis of CGE modelling can be viewed not as hard economic ‘truth,’ but as an aspect of one political imaginary among many, on equal epistemological footing to more radical attempts to imagine collective futures.

On opening up quantification to social analysis see:

On the use of DSGE models in Central Banks and the construction of ‘fictional expectations’ see:

On the parallels between social logics of divination and economic forecasting see: