From the defining issue of our era to “green crap” – the transformation of climate change discourse in the UK. 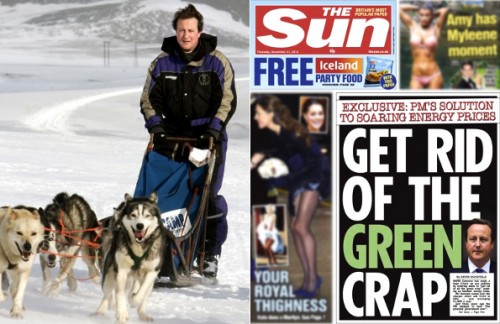 As the saying goes ‘the jury’s in’; human activity is causing global temperatures to rise unnaturally and catastrophically quickly. The IPCC’s international panel of more than 800 scientists compiled over 9,200 peer-reviewed research papers to reach this verdict.  As a result, we are said to be initiating a mass extinction event analogous to one that annihilated the dinosaurs. Yet, climate change, once a totemic issue for politicians attempting to appear progressive, is becoming one of their marginal concerns.  For example, David Cameron, when he was working to detoxify the Conservative Party, went dog-sleighing in the Artic to signify his green credentials and commitment to address global warming. In the new era of perpetual austerity he has deprioritised the environment; Downing Street appointed a climate sceptic as Enviroment Secretary and reportedly recently referred to environmental levies as ‘green crap’.

Politicians in precarious states of power are notoriously sensitive to a construct known as ‘public opinion’. Public opinion is an analogue, shape-shifting beast only temporarily captured by various combinations of: opinion polls, newspaper columns, phone-ins, Tweets, blogs, emails, petitions, TV vox-pops, and whatever people in power imagine it is. Climate change’s deprioritisation reflects the reality politicians are not under pressure from public opinion to address it. There is probably a variety of complex psychological, sociological, economic, and political reasons that could tell us how and why how we’re arrived at point. I am going to suggest some reasons for this shift by applying Foucault to my PhD research data.

Foucault was less concerned with what was or wasn’t true than the processes by which socially constructed, culturally-encoded explanations of reality or discourses struggle for ascendency: for the right to lay claim to the status of a widely accepted truth. Various denialist discourses challenge orthodox climate science’s claims to truth about global warming. They suggest climate change is either not happening; part of a natural cycle that has little to do with humans; or accuse scientists of being self-serving, deceitful and alarmist. Denialists, for example, cite the recent slowdown in warming, or the University of East Anglia’s email scandal to validate their discourse. They seize on science’s “points of diffraction” (Foucault, 2002, p65) – disagreements about, for example, exact future sea level rises.  This discourse is embodied in websites such as Global Warming Policy Forum whose chairman recently aired his views on the BBC’s flagship political debate show, Question Time. In the US denialist discourse is a billion dollar business.

Based on my conversations with young people which I’ve yet to publish, the debate about climate change has been muddied by this discourse to the extent some youth don’t ‘believe’ in climate change;  are cynical about the supporting science; or feel confused by mixed messages in the media they consume. Some, therefore, felt justified in saying they just don’t care about climate change’s potential effects. The youth I spoke to, like anyone who engages with modern technology, is nourished by a polymorphous information smorgasbord: they were exposed to information from the TV, the Web, online social networks, newspapers, teachers, friends and family. However, in their own explanations they blamed ‘the Internet’. Here’s an example of one of the exchanges I recorded:

Mark; ‘Remember the guy who once ran for president? He did this presentation that…’

Mark continued; ‘Yeah and he was saying, like, if you don’t change your ways now future generations are going to have to live in this, like, deserted flooded area and everything. That’s when people, like, believed in it. But now, all this stuff going on the Internet is changing people’s minds, as such.’

If it’s not on the Web then somewhere within their information network the young people I met encountered a denialist discourse that had laid claim to the ‘truth’. I know because they rehearsed its ‘truths’. I don’t want to characterise these young people as passive dupes unable to grasp the scientific evidence. I suggest the denialist discourse gives them a script to channel feelings of disillusionment and alienation that resonate with what feel about their future chances of prosperity. However, whatever the reason these are imminent voters who won’t be telling politicians they want something done about climate change.