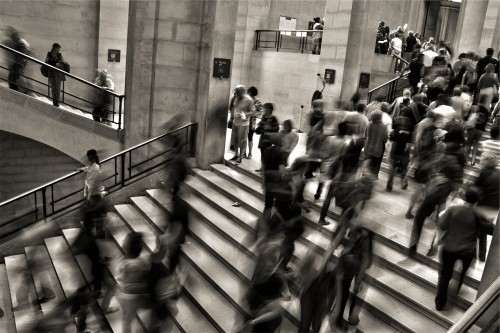 For LGBTQ people, public space is fraught with potential dangers, harassment, and discrimination. Over the past few months I have been researching how LGBTQ people learn to navigate space and its political implications.

Public space is the stage in which the sociopolitical plays out. How people present themselves and how people respond to such presentations is inherently a political struggle. Noting that gender is part of our performance is important to analyzing gender as a political act, as well as a potentially subversive threat to gender norms.

The concept of “passing” is particularly important, yet dubious for LGBTQ people. Being able to “pass” as heterosexual, cisgendered, and normative poses a number of advantages to navigating space. To an extent, LGBTQ people might manage their outward appearances and behavior to “pass” as normative. However, for many LGBTQ people this is not such a simple concept. Self-censorship and monitoring can lead to internalized homophobia, shame, and lack of self-esteem for LGBTQ people. It’s also particularly detrimental to non-heterosexual relationships in its limitation of where couples can go and where affection can be enacted.

Dominant conceptions of gender can be problematic for those who do not fit into them. Men may face stigma for being seen as effeminate. Women who are already at risk for sexual assault may be more at risk if their non-heterosexuality is seen as threatening to hegemony. Anyone who enacts non-normative gender expression may face particular negative attention and violence from those who seek to eradicate their difference.

For trans women of color, public space can be very difficult. Since trans women of color face disproportionate rates of murder, harassment, and incarceration, public space can be extremely dangerous. Though all LGBTQ people may face harassment, transwomen of color are often labeled by others as “mentally unstable,” “deviant,” and “radicals.” The intersections of oppression transwomen may face can make public life a difficulty. The matrix of oppressions and stigmas faced by people carrying multiple stigmatized and stereotyped identities makes achieving fulfillment and safety a much more difficult and inaccessible civic right.

“Safe spaces” for LGBTQ people may be difficult to come by. Often, physical markers such as flags, slogans and names that signify tolerance are all employed by spaces to to demonstrate they are safe, or perhaps, safer spaces. The Internet has created a new method of disseminating information about where “safe spaces” are. Information about where LGBTQ people can go for recreation, recourses, and comfort has become easier, although still imperfect.

All the above is a problem, not just for individuals but also for the community. The importance of being able to find and create community is contingent on one’s ability to be open, safe, and free to express oneself. Going forwards in the future, the LGBTQ community will have to pay attention to this issue, in the interest of preserving culture, well being, and interpersonal relationships. Not merely must public policy change to reflect this need, but our culture must change to accommodate the community.

That public space is inherently a political space means that power dynamics are always in play. And while identification of spaces and personal strategies for safety are important in the short term, an important political project might be to make spaces safer for all LGBTQ people regardless of how adept they are at “passing” or “navigating” spaces. I believe one of the most pertinent political projects for LGBTQ people should be an attention to public space. The creation of safety for LGBTQ people is an issue of overlooked importance, particularly for those of multiple oppressed identities.