Confessions of an Airport-lover. The ‘Non-place’ in a global village.

By AIGA. Uploaded to Commons by User:ChrisRuvolo [Public domain], via Wikimedia Commons

Like millions of others – possibly including yourself – I passed through several airports this summer (Remember summer?). But – perhaps unlike you – I obsess about airports, maybe because air travel forms a key part of my studies, or because I’m just something of an aero-geek. I mean, I was in the air cadets for two years as a teenager. But if you think about it, airports are strange, unique kinds of places.

Airports exist at the fringes of time, of space, of national boundaries and legal jurisdictions. There are thousands of airports around the world – over 41,000 according to CIA figures – yet they often feel oddly, almost disorientatingly similar. Despite the four and a half thousand miles and five time zones that separate them, Dubai airport at 3am feels much like Seoul-Incheon airport at 2pm: high ceilings, shiny floors, little daylight, global brands, tired and confused people shopping, sleeping, eating, queuing, trying to get some wi-fi…

For all the strangeness and sameness, I like airports: they feel like the most physical manifestation of an optimistic kind of globalisation. People talk exaggeratingly of the “global village”, but it actually feels real when you enter the terminal building of Heathrow and look at the departure boards. From this place you are only one flight away from Colombo, Cape Town, Chicago; Tenerife, Tashkent or Tokyo. The world feels smaller and full of possibilities when you’re in an airport; here, notions of cosmopolitanism and global citizenship feel a little less far-fetched. 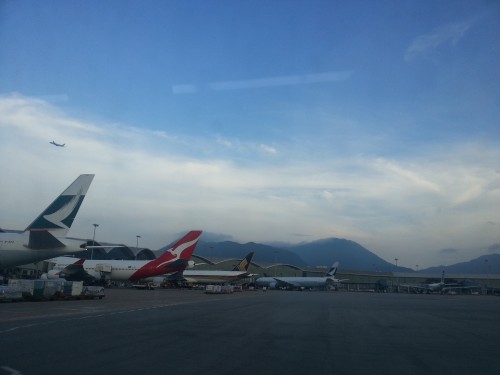 The sameness of airports is what anthropologist Marc Auge talks about in his book ‘non-places’. Just like chain hotels, chain coffee shops or chain restaurants, airports have little inherent geographic or historical identity. A Starbucks in London is much like one in Beijing, or Cairo. But airports are more than this, they are the non-place par excellence. Even Starbucks, Holiday Inn or MacDonald’s attempt to conjure up some kind of identity, primarily through marketing or internal design. Airports, on the other hand, are not enticing destinations, but functional conduits, what geographer Tim Cresswell calls “machines for mobility”. The only identity any airport has is the one we ascribe to it from our memories: the beginning of a life-changing trip abroad or a tearful goodbye to a loved one. We remember the places we were travelling to or from, or the people we were greeting or leaving, but the airport is an interchangeable backdrop to events; impersonal and mostly forgettable.

Airport managers are mindful of this, and often try to create some kind of identity for their particular airports. Many large cities now have more than one airport and as competition for airlines and passengers increases, so managers have a commercial incentive to try make their airport stand out – to make a ‘place’ out of their ‘non-place’. The easiest way to do this is to give an airport an evocative name, such as New York’s JFK, Paris’s Charles De Gaul or Liverpool’s John Lennon Airport. Sometimes this might work, but often the cultural references will be lost on all but the most historically and linguistically aware. I mean, do the airport names Heathrow, Pudong, Gatwick, or Chhatrapati Shivaji conjure up anything to you?

Airport consultant John Kasarda, author of ‘Aerotropolis’ notes that another way to conjure up identity among otherwise bland and uniform airports is through installing ‘local’ art, ‘novel’ architecture, or ‘regional’ cuisine outlets in airports, yet he concedes that even this is hard to do in a postmodern globalised world, where we’ve seen it all before.

“The national proliferation of regional food has ensured that few dishes are truly local anymore and the best art typically taps into common human, rather than regional, themes. Because planners and architects work from the same playbook, efforts to differentiate result in interchangeability. None of the strategies are wrong, but they frequently miss accomplishing the aim of making airports significant ‘places’ in communities.”

Perhaps Kasarda is missing the point. To an extent, we can find comfort in non-places. There is something about the anonymity, sameness and familiarity of airports which is perhaps necessary and even desirable. Just like the sight of a ‘good old’ MacDonalds might – to some, not me – be reassuring when we are hungry, disorientated and miles from home, perhaps it’s good that Tokyo-Narita looks a lot like Moscow-Sheremetyevo when you’re tired and confused and you’ve spend ten hours in the air. Maybe if airports did emphasise their uniqueness and local identity, it could appear overwhelming and disconcerting. After all, they are intended to be functional places – we’re not supposed to spend vast amounts of time in them (unless you’re Edward Snowden or Tom Hanks).

In an interesting ethnography of Amsterdam’s Schiphol airport, Tim Creswell tells the story of how airport signage has evolved to add to the uniformity of these non-places. The Dutch designer Paul Mijksenaar, inspired by the simplicity of British road-signs designed by Jock Kinnear, made his name by making Schipol’s signs similarly uniform and easy-to-understand. Before Mijksenaar became something of a guru in the field of airport design, airports often used idiosyncratic language which only locals might understand. For example, when Mijksenaar first visited JFK airport, there were no signs to Manhattan – only to the ‘Van Wyck Expressway’ – which would mean nothing except to a new-yoiker.

He was also perplexed by the different directional signs in different terminals, each with a different font and style. Mijksenaar standardised all of this, shunning colloquialisms, replacing signs for “Level A” with “Ground floor” and “Courtesy Vans” with “Hotel Shuttles”, and wherever possible avoiding words completely and using pictograms and symbol. The influence of Mijksenaar can now be seen in airports all over the world. On an aesthetic and functional level, I find his signs quite appealing. And the slick uniformity that he has helped engender adds to the sense that airports are reassuringly-similar bubbles of aeromobility scattered across the globe; possessed of a kind of other-worldly, almost exotic functionalism.

Could be anywhere….Schipol Airport in fact By User:Løken (Own work) [GFDL (http://www.gnu.org/copyleft/fdl.html) or CC BY-SA 3.0 (http://creativecommons.org/licenses/by-sa/3.0)], via Wikimedia Commons

While I find airports exciting and glamorous places (with the possible exception of Leeds-Bradford), they are not representative places at all. Perhaps 95% of the world’s population have never been on a plane. It might not always seem so to us, the hypermobile Elite, but flying is not a typical activity. And even among those of us lucky enough to fly, airports are sites of exclusion and privilege. Which immigration queue you find yourself in can say a lot about one’s status – your ‘mobility capital’, if you like. “You have a British, Finnish or Swedish passport? Congratulations! You can get visa-free access to 173 countries – no waiting for you! From Afghanistan? Sorry, you’ll need to get a visa for all but 28 countries. Back of the line please.”

And of course, if you have the money you can jump other queues too – first and business class board the plane first, of course, or you can pay extra for fast-track service, leaving the plebs behind you at security. Even the very entrances to airports are often an invisible border between the mobility-capital rich within, and the poor and ‘immobile’ outside. I’ll never forget the clean, modern, air-conditioned order inside Kolkata airport, before passing a line of armed police and exiting out onto the, hot, noisy and chaotic streets outside, where the taxi drivers, beggars, and street hawkers await – most of whom will never own or use a passport.

Airports are fascinating (non-)places. The fact we use them more and more, and the fact that they are growing in both scale and number on an almost weekly basis, doesn’t mean we should take them for granted. For one thing, climate change and declining oil supplies might mean that our present-day boom in air travel is one day looked back on as something of an extravagant carbon-binge blip in time. Perhaps more sobering is the thought that billions of underprivileged people around the world would dearly love to experience that exotic-yet-functional, unique-yet-uniform strangeness of the airport, but won’t get the chance. Worth considering the next time you’re complaining about your jetlag.

Cresswell, Tim (2006) On the Move: Mobility in the Modern Western World, Routledge