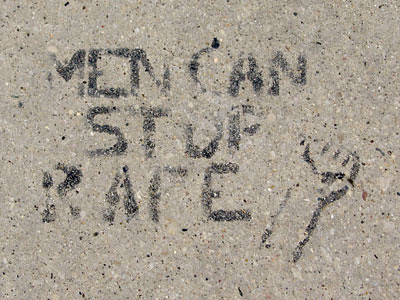 Our colleague Cliff Leek convincingly wrote about the importance of involving men in rape prevention work. Today I want to go back to a ‘debate’ on Fox News earlier this year, in which feminist writer Zerlina Maxwell raised this issue by arguing that rape can be prevented if men learn not to rape – an idea that was shot down (no pun intended) by Fox News host Sean Hannity as an unrealistic liberal pipe dream. Rather, Hannity and Gayle Trotter of the ‘Independent Women’s Forum’ – a conservative think tank – argued that the right to carry concealed weapons is what can protect women from being raped. Although clearly being an attempt to intervene in the gun control debate by these conservative thinkers, their arguments reveal some of the underlying assumptions about sexualized violence and masculinities in mainstream discourse – assumptions that are in strong conflict with findings from research.

Earlier this year, Zerlina Maxwell made the case on Fox News that carrying guns are not the solution when it comes to protecting women from rape and sexual assault. She tried to re-frame the debate, arguing that instead of focusing on what women do (or wear, or not do), we should talk about how we can teach men not to become rapists (as Cliff Leek pointed out, there are numerous amazing initiatives working with men all over the world now). However, Hannity, Trotter and a number of conservative bloggers on the internet were quick to reject the idea of even having this debate. Even worse than that (and as if to confirm Maxwell’s call for connecting constructions of masculinity to violence against women), some corners of the internet went on to harass Maxwell for her supposedly naive, dangerous and ‘men-hating’ comments, sending her not only racist and sexist messages but even death threats.

Taking a step back and looking more closely at the content of the debate and its underlying premises, it becomes clear just how contradictory, misguided and ideologically charged the anti-feminist backlash against Zerlina Maxwell and other feminist activists is. Although Maxwell was accused as a ‘men-hater’ for drawing attention to the importance of taking men and masculinity into account when looking at gendered violence, her argument is actually one that is far more positive towards men than is the anti-feminist case: Essentially, Maxwell argued (and feminists have done so for decades) that men don’t have to be the problem but can be part of the solution – by learning and by teaching other men and boys how to reject violence and how to treat women (and other boys and men) with respect – and by asserting that men have the ability to change. In contrast to this nuanced and positive argument that sees men as potential allies, the anti-feminist solution can be summarized as: ‘Women need to shoot men’. In other words, the anti-feminist position must assume that men are always and necessarily a danger for women and there is nothing we as a society can do about it. Often, these discourses then fall back onto what Martha McCaughey calls the ‘cavemen mystique’: biologistic arguments that claim that violence and a ‘natural’ urge to rape are inherently programmed into men’s brains. In this way then, the anti-feminist view of the likes of Hannity and others is far more insulting towards men than that of the supposedly ‘men-hating’ feminists like Zerlina Maxwell, since the former must assume that all men are born potential rapists, unable to change, whereas the latter strongly and explicitly reject this assumption.

The claim that guns will protect women from rape is also revealing of the misconceptions about gendered violence on a different level. Thinking that women could protect themselves by carrying concealed weapons and shooting their assailants implicitly assumes that rapists are monstrous predators, lurking in dark corners and park, attacking women at random (an image also connected to racialized discourses of Black masculinity in the US). However, although some women are sexually assaulted by random strangers, the vast majority of rape and sexualized violence is committed by perpetrators known to the women, girls and boys they victimize (the 2010 National Intimate Partner and Sexual Violence Survey found that less than 15% of rape victims were victimized by strangers): Rapists are far more often husbands, boyfriends, friends, acquaintances, fathers, uncles, ex-lovers or dates, coaches, priests or teachers than they are the random attacker ingrained into our popular culture. In other words, in order for firearms to be an effective solution to ending rape, women (as well as girls and boys) would have to be prepared to make use of them in their bedrooms and nurseries, at college parties, bars and in dorms, and often against people they trusted before the assault. The anti-feminist discourse has to ignore these realities and pretend that sexualized violence is the problem only of a handful of ‘sick’ men – it has supposedly nothing to do with the majority of ‘normal’ men they see themselves as. In other words: Paradoxically, the potential for violence and the urge to rape women are both inherent to men because of their ‘nature’, yet rapists are always a minority of others and sexual violence does not having anything to do with masculinity at all, the argument does. Go figure.

The inherent contradictions of the conservative case against connecting masculinity and violence as well as the ignorance towards the reality of rape and sexual assault found by numerous studies show that only a feminist analysis of gender and violence can move us forward towards eliminating rape and gendered violence. Clearly, the majority of men never become rapists and would strongly reject the notion that they would sexually assault another individual even if they could get away with it – disproving the anti-feminist argument that rape is simply part of ‘male human nature’. At the same time and as pointed out, data shows that rape is not a problem of only a handful of perpetrators, either. Rather than pretending that carrying firearms or telling women what to do or wear can be the solution to gendered violence, Zerlina Maxwell’s suggestion that we should figure out how toxic constructions of masculinity result in (some, but still way too many) men becoming perpetrators of sexual violence and creating educational tools to address this connection of masculinity and violence is well called-for.