Autocompletes of Sexism and Inequality 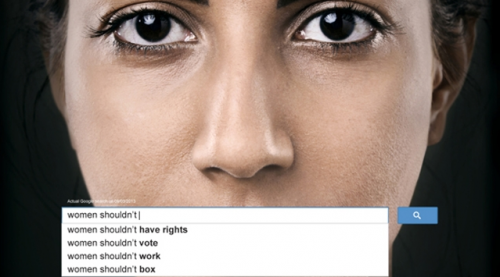 Yesterday, I read a disturbing article in Adweek. “Powerful Ads Use Real Google Searches to Show the Scope of Sexism Worldwide Simple: Visual For Inequality” by David Griner explores a new campaign idea from UN Women, which used real suggested search terms from Google’s autocomplete feature. The ads, which were designed by art director and graphic designer Christopher Hunt, were designed to illustrate how gender inequality continues to be so problematic that even Google has come to expect it.

Being a sociologist, I was interested in the reliability of the Google experiment. So, I conducted my own Google search of the phrases used in the project. My findings were not exactly the same as the UN Women campaign but I was saddened to see so many misogynistic phrases pop up on my screen. I found “women shouldn’t…” work, be in combat, or be cops. In contrast, “women should…” know their place, not preach, not speak in church, and not be in combat. Google autocomplete told me that “women need to…” shut up, grow up, feel wanted, and feel safe. And finally, “women cannot…” be trusted, be pastors, have it all, or teach men.

Before I looked deeper into some of these findings, I wanted to find out what Google autocomplete had to say about men. Using the same search terms, I learned that “men shouldn’t…” marry, wear flip-flops, wear shorts, or be jealous. On the other hand, Google suggested that “men should…” always pray, be allowed to hit women, not get married, and wear make-up. I found that “men need to…” feel needed, grow up, ejaculate, and cheat. In addition, “men cannot…” be feminists, be trusted or get HIV from women.

YIKES! Where to begin? I figured the best place to start was to look at what links came up when I clicked on one of these autocomplete suggestions. I started with “women shouldn’t be in combat,” which is still clearly a hot topic. On January 23, 2013, Defense Secretary Leon Panetta lifted the ban on combat designation.  Although women had been in combat for quite some time, the ban on that designation denied them the pay and advancement opportunities of their male counterparts. The lift pushed the women in combat debate into the spotlight once more.  When clicking on the autocomplete suggestion the first link was an opinion piece in U.S. News by a professor at Wayne State University Law School arguing that the decision to open ground-combat positions to women is seriously misguided and even disastrous. However, the first page of links was a melting pot of balanced reviews of the debate, critiques of the “anti-women in combat” argument. There were links to articles in Wall Street Journal, Time, MSNBC, Conservative Christian publications, and government watchdog organizations. Regardless, the heated debate seemed a striking contrast to the “men shouldn’t wear flip-flops,” which results in approximately 4,670,000 links.  Most of which were humor columns and Facebook pages.

I know better, but there was this little part of me that hoped “women should know their place” would be as amusing as “men shouldn’t wear flip-flops” or maybe the phrase would lead to links about how “women should know their place” as leaders in government, industry, academia, and the global future. Instead, I found a scary set of blogs written by both men and women about the proper roles of men and women in society. A female blogger posted, “If you’re lucky, you get to be a stay-at-home baby maker. Can you say dream job?” A male blogger posted, “When was the last time you put an Americunt in her place? When was the last time you called out a cockblocker… When was the last time you told her to fuck off with her offensive, masculine attitude… You thought she would stop at equality? She wants it all, and she’s gonna get it, because all you’re going to do is cry about it to your friends while swigging back a artisanal microbrew.” And all of that came from the first ten of about 782,000,000 results.

I was a little frightened that so much misogyny could be found in several seconds with the help of Google autocomplete feature. However, maybe I live on a silver lined cloud. My friends and colleagues believe that we can challenge persistent inequality and make significant changes in the world. We are not blind to the realities of the sexism but we focus on potential solutions, progress, and victories. Therefore, it was a bit jarring to see that in the real world of the internet, finding the inspirational, egalitarian, and progressive resources my colleagues and I discuss with such gusto takes a lot more work. And my little experiment with Google autocomplete did not even take into consideration the complexities of looking at intersections between race, ethnicity, religion, sexuality, or class.

Clearly, there is so much value at looking at how technology reflects our social conditions. This is just one example. It illustrates the amount of work that still needs to be done to fight sexism and gender inequality, which are rooted in our norms, values, and beliefs and now reflected in our autocompletes.