Valentine's Day and the (sociological) Power of Love 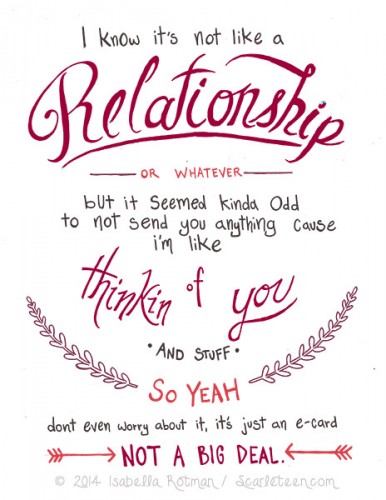 In case you were the only person who didn’t realise, last Friday was Valentine’s Day. I hate Valentine’s. Its ever increasing prevalence, its cloying, creeping appearance that infiltrates perfectly normal looking things and makes them red or pink, and the way the world suddenly becomes full of people perpetually and disgustingly in love, or stressed, or miserable and alone, or a combination of all three. If I sound bitter, please know it is definitely intentional. I am bitter, but not for the reason you might think.

Sociologists, as my friends and family will attest, deconstruct anything. We are taught to question when human action or behaviour is described as ‘natural’, particularly when discussing needs, wants and desires that are seen as fundamental to human existence. Feminism for example has sought to trouble ‘natural’ explanations, emphasising the need to distinguish between ‘sex’ and ‘gender’ and to problematize essentialist views of what men and women ‘naturally’ do: ‘One is not born, but rather becomes, a woman’. Can the same be said of romantic love? Is it a social construction or does it have a ‘natural’ explanation? And what is love if it isn’t natural?

Social theorists have tackled love in a multitude of ways, most in reference to the ways that feelings, actions and expressions of love have been affected by changes in modernity. Eva Illouz in her recent book ‘Why Love Hurts’ argues that love is inherently bound in social influences. In reflexive modernity, love is highly individualised. Romantic relationships become highly rationalised decisions underpinned by a sense of consumerism. Meanwhile, the commercialisation of love and proliferation of romantic discourses in consumer culture leads to expectations of love as ‘salvation’ – and it is therefore also hyper-emotionalised. Zygmunt Bauman even more negatively believes that love has been liquidated and meaningless to the point of destruction, while Beck and Beck-Gernsheim argue it is individualisation par excellence, with both positive and negative implications. It gives meaning to our lives in a society categorised now by risk, rather than meta-narratives such as religion or community. Perhaps the most optimistic analysis of love comes from Giddens’, who argues that relationships and love are becoming more democratic, fluid, short term and pleasure-based, and with greater emphasis on equality. Whilst this holds some weight, I confess Giddens has a tendency to make me queasy in the way only a middle-class, well-educated white man who is incapable of checking his privilege can, by completely failing to do so. His insistence on a free and agentic individual who is able to freely move in and out of romantic relationships according to their own choices ignores the difficulty of ‘choice’ for many. Ironically in trying to offer a sociology of love, he ignores many sociological factors.

Stevi Jackson’s beautifully titled “Even Sociologists Fall in Love”, argues that the study or theorisation of love is often met with resistance. As she notes, “given that sociologists are wont to theorise on any and every aspect of everyday life, and are generally interested in demonstrating that all relationships and institutions are social, why has love escaped serious scrutiny?” Much like sexuality, it is uncomfortable for people to believe it is as a result of anything more than their own choice, it is a subject seen as so personal it shouldn’t be studied. No one wants their intimate feelings of adoration besmirched by Sociological explanations. Maybe it is a methodological issue – it is just too difficult to explain the feeling, act or experience of falling in love, or being in love. We have an entire culture of art, music and literature dedicated to the impossibility of putting these feelings into words, so how would we go about conducting research that by its nature relies on self reporting and description. Does the very indescribability of love make it even more important to describe sociologically?

A recent research paper published in The Sociological Review provides an excellent example of an integrated sociological analysis. In interviews, the author noted ambivalence in young women’s discussions of love, finding they often described their relationships as just ‘happening’, rather offering stories steeped in emotion or in rational choice. This may be indicative of the fluidity that Giddens refers to, and certainly runs against Illouz’s description of an idealised and commercialised romantic discourse, a rejection of a commercialised, pre-packaged romantic ideal and a move to a more realistic expectation of relationships. This is particularly encouraging given the wealth of feminist research demonstrating the differing discursive effects of ‘love’ for men and women. The attitude that ‘women want love and men want sex’ is surprisingly enduring, and can be extremely damaging for relationships, particularly in young people who are particularly perceptive to these discourses. It may simply be a methodological issue, where discussion about love is too private to do properly with an interviewer.

And yet, ‘love’ in whatever format we believe it to be in is still an incredibly powerful discourse. This becomes clear in the debates on gay marriage – things like this video  that recently went viral puts emphasis on true love as the most important reason for gay men and women’s right to marry, rather than pointing to the inherent inequality of denying a group of people something that would support their civil liberties and citizenship rights. ‘Love’ is used as a proxy, as a way of attempting to appeal to the masses, and given as the ultimate be-all and end-all reason for the formation of marriages, families and relationships. And maybe that is where my pessimism comes back in. Not because love is good, and not to deny anyone the power it might have in contributing positively to their lives. But to question its sacred nature, and point to the importance of maintaining critical distance, if only long enough to be bitter on Valentine’s Day.