The Value of Art In the Age of Financial Crisis 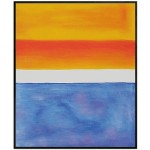 The economic crisis of 2008 changed the way that many markets operate, their pace, size and reach. However one market that has not slowed is the art market. In November, Sotheby’s enjoyed the most successful night in its storied history, selling almost $375 million worth of Abstract Expressionist and Pop Art.[1] Like many markets, the art market is based in word of mouth and on the knowledge and history of previous sales. There is an aura created around an artist and their works based on these prices as well as in relation to supply or, uniqueness of the works of art based around ‘security.’ As Adam Davidson argues, “art isn’t gold, or any other commodity in which units can be evaluated objectively.”[2] Yet, is the way that the art market functions really that different from other markets? What is it about the art market that has allowed it to remain relatively insulated from other markets and experience growth during this downturn?

In order to examine the way the art market functions I want to look at two examples, and in particular to explore how key determining factors (such as uniqueness and ‘security’ of investment) alter the works of art and how they are sold (or not) within the current art market.  I want to firstly focus on the works of Mark Rothko. In 1967, a red Rothko sold to the National Gallery of Berlin for $22,000.[3] Over the last few years, Rothko’s work has sold at auction at extremely high prices. For example in May 2012 Rothko’s Orange, Red, Yellow sold for nearly $87 million.[4] There are many explanations for Rothko’s increasingly high sales. One is the suggestion that Rothko was born in Russia and that is works are being bought by new wealth in Russia.[5] Another notion is that the large size and blocks of bright colors appeal to people as objects to hang in their homes and, as such, his work is easily recognizable. The high prices of Rothko’s works have fuelled even higher prices in later auctions and have been supported by the inclusion of much of his work in permanent museum collections (Tate Modern, National Gallery of Art and the Museum of Modern Art). His works are now deemed ‘safe’ for investment at a moment in time when many investments are not.

As a contrasting example, we can look at the work of Damien Hirst. During the early 2000s, Hirst’s works were increasing in value amongst investors. One of his highest selling works, The Physical Impossibility of Death in the Mind of Someone Living (a shark suspended in formaldehyde), sold for $12 million.  More recently, however, Hirst’s work has been resold with an average loss of thirty percent.[6] According to Andrew Rice, Hirst’s fall can be traced “to a $200 million auction staged in 2008, on the day Lehman Brothers collapsed. Hirst sold hundreds of works directly to bidders, defying the custom of restricting supply.”[7] Collectors were unhappy and art dealers warned of dilution. In 2009, a statue entitled Trust sold for $150,000 when it had been purchased for $450,000 two years earlier. A spot painting entitled Decaprin was sold for $600,000 in 2011 when it had been bought for $1.1 million in 2008. Here, we can see that in a space that is defying the odds of success in a time of economic crisis, a distinction is formed between those artists whose work is considered a ‘safe investment’ and those that are not.

The idea that the art market does not operate like other markets might be misguided. Yes, it is ‘booming’ at a time when other markets are not doing so well. However, the way that it functions is in many respects much like other markets, based as it is on an aura of value in a speculative economy. Investors find refuge in the art market because certain works of art are guaranteed a return and, in most cases, these works of art are unique and irreplaceable. Here, we can see that the value of art in the age of financial crisis is based, like other commodities, in the cultural and social value associated with it.

Davidson, Adam. “How the Art Market Thrives on Inequality”, http://www.nytimes.com/2012/06/03/magazine/how-the-art-market-thrives-on-inequality.html

Ferro, Shane. “In the Debate About the Art Bubble, The Dealer is the Missing Piece”, http://www.artinfo.com/news/story/854175/in-the-debate-about-the-art-bubble-the-dealer-is-the-missing

Fontevecchia, Agustino. “Christie’s And Sotheby’s Going For Their Biggest Auctions Ever As Art Market Stagnates”

Vogel, Carol. “Record Sales for a Rothko and Other Art at Christie’s”, http://www.nytimes.com/2012/05/09/arts/design/rothko-painting-sells-for-record-nearly-87-million-at-christies.html?_r=0