Not being on "Team Bublé": Musicians, Gender and Unspeakable Inequalities 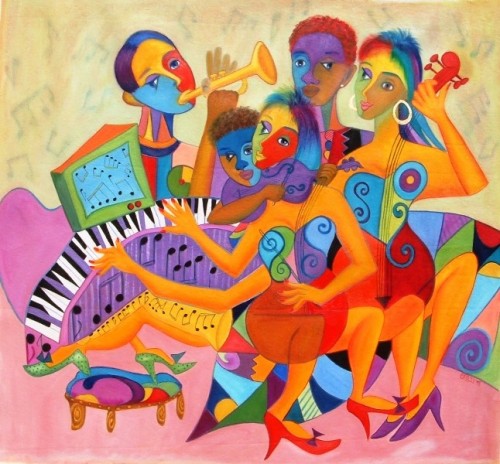 “My buddy here has more bitches that the Oprah Book Club”

“Now I’m not gay, but if I was I would be rubbing this guy’s bald head all night long”

Last week, I (along with 2000 other screaming women) went to see Michael Bublé play at the 02 arena in London. The above statements were both made by Michael Bublé as part of his ‘band introduction’. The all-male brass section all had nicknames, funny quips and spinning portraits.The whole section of the concert was made to imitate an American Football team, ‘Team Bublé”. Whilst not all of the introductions were particularly tasteful, this in itself was not that remarkable. However, later on in the concert the string section came on, and were all female. They played as many songs, their contribution was as integral to the music. Despite this, in that time they were not acknowledged at all, they had no names and were treated largely as if they weren’t there. This inconsistency reflects many wider sociological trends in music performance.Gender segregation is common in orchestras, starting firstly with choice of instrument – research shows that certain instruments (strings and woodwind) are seen as feminine, whilst brass and percussion are viewed as masculine and largely taken up by male students. This is crucial as the choices made by musicians as to what instrument to play can play a significant role in their future prospects. The choice of musical instrument affects what kinds of musical ensembles can be played in, which has an effect on future earnings and chances of employment. Jazz, for example, tends to be played by men significantly more often than women, (see here for further examples)  something that is very problematic given how many instrumental teaching and performance positions include a jazz component. As was evident from this concert too, music that involves improvisation and focuses on a number of soloists allows scope for more individual prestige than music that requires tight collaboration, as is needed for string accompaniments.

So, perhaps women simply chose to be in areas with lower status and prestige?  When it comes to gender equality, much is said regarding the notion of ‘choice’. The idea that women ‘choose’ not to work, or ‘choose’ low pay or low status roles, is often put forwards as an explanation of gender difference in employment. Christina Scharff, who is conducting research into the classical music industry, argues that gender has become ‘unspeakable’: the focus in modern society on the individual and a belief in meritocracy make discussing gender inequality very difficult, even for those who are experiencing it. Ros Gill also outlines how in employment individuals are often reluctant to locate barriers as being gendered, as it goes against the ‘language of individualism’ that is seen as the way to succeed. The articulation of these barriers is instead described as individual failure or choice, rather than a wider problem.

The reason why the concert is important is that, numerically, the band had gender equality. There were an equal number of men and women on the stage for most of the concert, and what they produced was an impeccable and incredible performance. The problem is that the way the men and women in the group were treated, by both the audience and the singer, was drastically different.  The men had personalities, entrances, exits and solos; the women were homogenous and silent. This cannot just be explained away with choice, or with justification, but it is difficult to find the language to explain sexist practices. Even as sociologists it can be difficult to research these areas without pushing our own understandings of gender onto individuals. This is the challenge for sociologists and feminists alike.

Being a sociologist can sometimes feel like The Matrix, and wishing you had taken the blue pill. There are times when over-analysis of the sociological implications of your surroundings and situations can be tedious or unnecessary.  Other times, it’s noticing these incidences that can bring issues of gender into sharp relief and give voice to unspeakable inequalities. Perhaps it isn’t my place to say whether the women in the string group would ‘choose’ to be part of “Team Bublé”, but I definitely can’t believe the distinct gender segregation was a coincidence, and cannot forgive the lack of status given to the women.