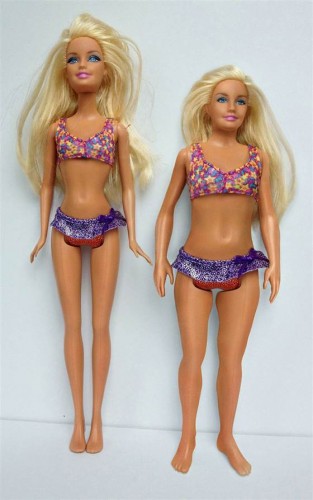 Many young American girls grow up playing with Barbie dolls. I certainly did—brushing her hair, dressing her up in dresses and high heels, even taking her pink Corvette out for a spin. I had Barbie, Ken, Skipper, the whole gang. She was so beautiful, popular, and successful. Oh, and skinny. And busty.

Recently, an artist created a 3D rendering of a “normal” Barbie (pictured here), using the average body stats, provided by the CDC, of a 19 year old American woman. The resulting doll is shorter, has a larger waist and butt, and walks with feet flat on the ground (as opposed to those invisible high heels Barbie always seemed to be wearing). This “normal” Barbie is still unrealistic—her doe eyes are still far too large and her skin impossibly flawless. And given the growing average weight of American women, this doll is still probably far too thin to be realistic. But she looks healthier and more athletic than the waiflike original. The same artist has also created makeup-less Barbie dolls to show that they are just as lovely without extended lashes, heavy eye shadow, and lipstick. His goal with both projects is to encourage manufacturers to create more natural looking dolls that won’t pressure girls with unrealistic beauty standards.

There is plenty of research to indicate that Barbie’s unattainable measurements affect young girls, leaving them with poor body image, low self-esteem, and unhealthy relationships with food. Yet, many commenters on the artist’s blog offer the usual criticism: what’s the big deal, it’s just a toy. In some ways, this question makes sense—one doll should not make or break a girl’s self-esteem. But the toys we play with have individual and cultural ramifications (Masters, 2008) that we just can’t ignore (in an earlier post, I discuss the gender norms that toys tend to promote). And more than that, Barbie is not the only influence in girls’ and young women’s lives, telling them that looks are everything. Barbie is one piece of a very problematic puzzle. Barbie reaches girls at a young and vulnerable age, long before they become savvy consumers of cultural images, and often before parents anticipate needing to explain these complex issues. And after Barbie come teen magazines, teen celebrities, fashion models, and a host of media and peer group influences that seem to tell girls that they aren’t good enough the way they are.

I think that “normal” dolls are one of many things that should be considered. It would be a simple change to make dolls a bit more realistic, with measurements that real human beings could actually embody. It would be good to teach young girls not to accept these images at face value. And on that front, there is some good news. Although toys matter, like all media and representations, we don’t have to consume them in the ways their makers intended. And as it turns out, children’s creativity seems well-suited to reconfiguring Barbie’s meanings. Erica Rand’s book, Barbie’s Queer Accessories, explores the many innovative ways that people play with this iconic doll. The adults she interviews recall a variety of queer Barbies: from transgender to punk, these ways of “playing Barbie” are not Mattel’s intent. If we can resist the pressure in these ways, we can surely rail against the constraining beauty narratives as well.

I’ll end here with a personal story, a favorite in my family. I was about 5 years old, on a family vacation to visit my grandparents. And because Barbie was my favorite toy, I’d packed my suitcase with several dolls. One rainy afternoon, I was inside playing when I innocently called my grandmother over to see them…two Barbie dolls, in their birthday suits, kissing! My parents insist, to this day, that even in my young mind, I knew that this would be a bit discomforting for my rather prudish grandma, who was still coming to terms with my parents’ lesbian relationship. Whatever my intention, it is clear that I resisted the heteronormative story Mattel tells about Barbie and Ken. And I bet many others have similar stories—stories about remaking Barbie’s looks and identity, chopping off her hair, cross-dressing Barbie—suggesting another strategy for parents who want to raise girls with higher self-esteem: encourage their creative play, which can be its own form of resistance.