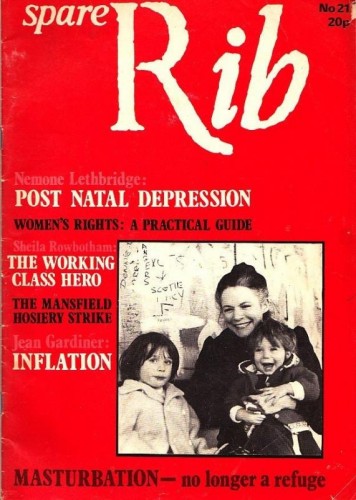 It was recently announced that the radical feminist magazine Spare Rib is to be re-launched in the UK, with an online presence as soon as next month and a print version available in the Autumn. Spare Rib first launched in 1972 out of the 1960s feminist movement and made a point of covering taboo and controversial issues such as domestic violence, lesbianism and birth control, amongst many others. This re-launch has been greeted by many (myself included) with a hearty cheer, and has raised many questions with it. If this launch is successful, does this suggest a mainstream acceptance for feminist thought? Perhaps it will make feminism more accessible to a generation of young women, something it sorely needs. Either way, the re-launch indicates two key phenomena: a rejection of women’s magazines, and the increased visibility, acceptance and impact of feminist writing.

There is a wealth of sociological and feminist research into the content of women’s magazines and the effect that they have on women’s sense of self, body image and sexuality. As Ros Gill notes, magazines such as Heat are based on obsession, both with celebrity and particularly with the derision and scrutiny of female celebrities’ bodies -such as calling them too fat, too thin, or in many ways ‘too human’; with the hyper-visibility of sweat marks, wrinkles and armpit hair, to name a few. Other analyses that compare women’s and men’s magazines highlight how they (re)produce a starkly gendered differences. So-called ‘lads mags’ discuss sexuality in a youthful, brazen and hedonistic sense focusing on women as sexual conquests and the importance of ‘getting a shag’ (see for example Ticknell et al 2005). In comparison, women’s magazines construct sexuality and women’s bodies as something to be worked at, attended to, self disciplined and present men as requiring a great deal of emotional labour and understanding. The same is not true of men’s magazines’ description of women. This reassertion and emphasis on gender differences (The “Mars and Venus” Paradigm) eroticises gender difference, and makes it very difficult to dismantle gendered inequalities, by focusing on the inevitability of the situation.

This is the tip of the iceberg of a critique of women’s magazines, and it is not only put forward in academia – online blogs such as Vagenda provide an even more scathing and often very funny critique of these magazines. This and other sites such as Everyday Feminism and The F Word amongst others allow feminist writing and debate a space outside the academy. Initially this democratization of discussion was seen as unequivocally positive, although it has not been without its problems. Online feminism has, in some cases become internal and personal, with focus being placed on criticism of other feminist writers rather than supportive and positive debate, and has emphasized other aspects of class and racial privilege. The contributors for Spare Rib have not yet been announced, but the names attached are (so far) all white, middle-class journalists. This is not unusual in the magazine industry, but does not reflect the plethora of voices feminism purports to represent.

Another outcome of the increase of feminist writing, and the internal critique is that the movement has become fractured. Feminist discourses become so much a part of the cultural field, anti-feminist and feminist discourses have become entangled and conflated, particularly with regards to advertising, marketing and consumer culture. As argued in The Onion, a satirical online newspaper: “Women are now Empowered by Everything They Do”. Feminism is repackaged and re-sold back to women, and it is in some ways hard not to see Spare Rib falling in to this trap too.

The editor, Charlotte Raven, has promised Spare Rib will discuss “life, not lifestyle”, and she is both highly critical women’s magazines, and keen to provide another platform for feminist discussion.  She hasn’t however clarified what this will entail, and I confess, that when I tried to picture what a feminist mainstream women’s magazine might contain, it is difficult to picture. Whilst the idea and justification is there, the reality is harder to imagine. Can a magazine survive without the focus on commercialization and advertising, particularly in an age where the sale of the printed word is in massive decline? Will mainstream sponsorship want to be associated with a radical feminist publication? Most pertinently, is it possible to conceive of a magazine that represents ‘life’ (not lifestyle) without being gendered? Gender is everywhere, and nowhere more evidently than in our reading material. The Spare Rib utopia is at the moment just that, a utopia, and one that I really truly want to have faith in. Whether the magazine can avoid the pitfalls ahead remains to be seen.