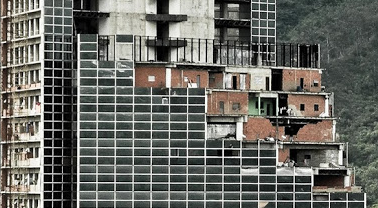 Sociologists are frequently interested in how communities are imagined, built, developed, and restructured.  Studies of how communities are destroyed, abolished, or evicted are typically associated with scholarship on genocide, war, natural disaster, or gentrification.  These studies often equate the termination of a community with trauma, personal loss, and inequality.  In some cases, communities dissolve in less dramatic ways.  In some cases, as the needs of a population change, people and the communities they created travel from one space to another.  Recent news regarding the redevelopment of downtown Caracas in Venezuela sets the stage for an unusual case of a decomposing community.

In the 1990s, construction on the Centro Financiero Confinanzas began as hopeful Venezuelans envisioned the creation of an economic mega-center similar to Wall Street in the United States.  The skyscraper, which became known as the Tower of David after developer David Brillembourg, was a 221,000 square meter complex made up of five buildings and a 47-floor glass tower (Caldieron 2013: 139).  Expectations were high.  However, in 1993 Brillembourg died and the following year the Venezuelan market collapsed.  Construction on the Tower of David came to a halt.

The complex stood vacant until 2007, when several hundred homeless men, women, and children invaded the abandoned tower and took residence there.  Despite the tower’s reputation for crime and association with gang activity, invader-residents created a vibrant alternative community complete with apartments, shops, a church, and fitness area.  Markets, salons, health services, and recreational activities also emerged and the tower became known as a city within a city (Anderson 2013).  Although lack of adequate sanitary services was problematic in the community, residents were able to install basic water and electrical services.  But despite the innovative achievements of the community, life in the high rise was anything but luxurious.  With no functioning elevator, residents living on higher floors had to make an arduous trek to their apartments.  And the limited septic system resulted in halls that reeked of human waste. 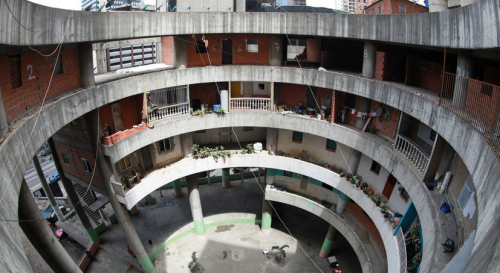 Yet, many residents viewed life within the Tower of David as a refuge from the city’s crime-ridden slums.  The community was managed and organized; residents were expected to follow work schedules and dwelling rules were posted throughout the complex (Cawthorne 2014).  Despite the challenges of living in the abandoned building, dwellers stated that there were obvious benefits to their residence, location and access to transportation to be key advantages to living in the tower (Caldieron 2013: 145).   Journalists and researchers found the resident populations split on the question of if they would be willing to vacate the locationif provided government housing.  However, with no place to go and few resources to leave relocation was never an option for many living in the tower.

That changed in July of this year when the Venezuelan government began to evacuate the Tower of David.  Arguing that the structure is not safe for dwelling, the government has been relocating people to public housing in the town of Cua just over 20 miles south of the capital.  According to Public Radio International, the government plans to have the majority of residents relocated by the end of this week.  Even though only about half of the occupants have been relocated to date (Rosati 2014).

Recently, increased reports of residents’ upset with the relocation have surfaced.  Residents have sentimentally described building their homes with their own hands and the beautiful views (Domonoske 2014; Rosati 2014).  Others have described the challenges of leaving friends, jobs, and social networks.  Thus, a more complex picture of life in the tower has begin to emerge; a sense of home seems to have grown in the cracks of an abandoned structure. 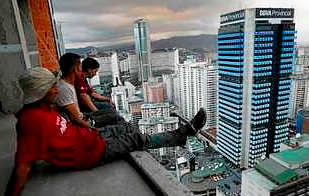