Homosexuality and Anti-Colonialism: How Homosexual Frenchmen Are Actually Colonialists 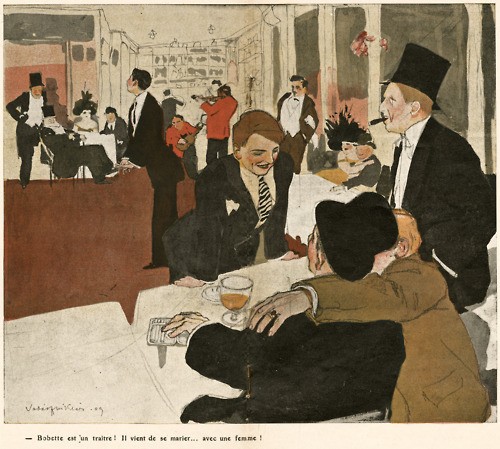 Before the conquest of the colonies many non-Western, indigenous, societies did not believe in a heterosexual/homosexual binary. In lieu of this binary, many indigenous societies had some notion of a third category for a person’s sex: a man, or woman, who would dress as the opposite sex but sustained same-sex relationships. The indigenous populations viewed these same-sex relationships as something natural, not perverse. Conversely in Europe, the production of the homosexual was well underway with the coinage of the term in 1891. Many of the men in the imperial army were aware of their colleagues who had “those” tendencies: certain men that enjoyed having sex with other men. Yet once in the colonies, the soldiers met with indigenous men whom were willing to have relations with them. The soldiers believed it was a “situational” homosexuality, as coined by Aldrich. But how was the knowledge of a “situational” homosexuality produced? In the words of Bernard Cohn, this “situational” homosexuality came to be through investigative modalities.

According to Cohn, “an investigative modality includes the definition of a body of information that is needed, the procedures by which appropriate knowledge is gathered, its ordering and classification, and then how it is transformed into usable forms such as published reports, statistical returns, histories, gazetteers, legal codes, and encyclopedias” (Cohn, 1996: 5). Investigative modalities provided a way for the British to formulate a history of India before their involvement, and the history constructed thereafter. Thus, an investigative modality is a form of information that becomes a naturalized, and an internalized, truth. Then how did French soldiers justify, or solidify, the notion of “situational” homosexuality? The French soldiers believed their colleagues’ homosexuality was “situational,” due to their belief of homosexuality as a product from the colonies. An account from Aldrich’s text alludes to the climate of French colonies, and the lack of women, led French soldiers to emulate local practices of the territory: for example, practicing same-sex relations. The French soldiers believed the “situational” homosexuality would halt upon their return to the metropole, since it meant going back to a society that had an abundance of women. However by concentrating on this information and naturalizing, or according to Cohn by “officializing,” this script it produced the knowledge of homosexuality and the homosexual being from the colonies. For French soldiers, the cure to homosexuality was to return home. Despite the French soldiers’ preconceived notions about their colleagues’ “situational” homosexuality and cure for it, many homosexual soldiers remained in the colonies with their love interests. Yet what caused the homosexual Frenchmen to stay?

Some homosexual Frenchmen, whom had relationships with indigenous men, stayed in the colonies because they saw their homosexuality in line with their political beliefs: that being anti-colonialist. Certain authors who wrote about their love interests; which viewed imperial invasion as crude, and disruptive of indigenous life. In particular, Daniel Guérin is an example of this conflation of political and sexual identities. Aldrich states, “overseas experiences made him aware, he recalled, of the evils of colonial rule and imbued him with a deep-seated anti-colonialism” (Aldrich, 2001: 214). Many other Frenchmen shared these sentiments and were critical of the French metropole. What these men failed to see, however, is that the colonization process of imperialism offered them the ability to be homosexuals in the colonies.

One way to see how imperialism enabled Frenchmen’s homosexuality in the colonies is through the process of making the “other.” Past excursions of imperialism were for the search of treasures not found in the metropole. These “exotic” places had items the empire wanted and needed. Although a far stretch, Aldrich equates this notion of the “exotic other” with notions of homosexuality. He posited, that, a main theme in many of the homosexual authors’ writings seemed to link, or conflate the idea of the “exotic” colonies with sexual seductions. One author in particular, Jean Sénac, often wrote about the scenery of the colony and his sexual encounters with the indigenous men. Sénac and other authors could create an “exotic other” because of their background: either being from the metropole, or the first generation born in the colonies, and their access to resources such as education. These authors had access to power that indigenous men from the colonies did not, which allowed them to exercise their dominance. According to Edward Said, orientalism was a production of power relations, and dominance, between the Occident and the Orient due to the fact that the Orient could be subsumed and controlled. These French authors could exercise their power to eroticize the indigenous men and their country: thus, creating the “other.”

To further Said’s notion, another viewpoint of imperialism’s influence on homosexuality coincides with the idea that by being a sexual outcast in the metropole, French homosexuals could empathize with the colonized indigenous people: they were both victims of imperialism. Homosexual Frenchmen felt they could not freely express themselves and be open about their sexual identity in the metropole. Yet once they were in the colonies, and no longer constrained by Western ideals, the homosexual Frenchmen could seek out same-sex relationships with men whom were willing to return their affections. Nevertheless is this not a display of power, to potentially resist colonial rule and deny one’s background? To have a choice in where one decided to stay? This was only possible because of the traveling between the metropole and the colonies afforded to Frenchmen, not indigenous men. If it were not for overseas expansion other homosexuals, like the aforementioned authors, would never have been able to claim a political identity, as anti-colonialist, to be synonymous with their sexual identity. The empire served as an impetus for homosexual Frenchmen to explore their sexuality, power and resist Western ideals.