It's Time to Discuss: Race, Police Misconduct, and Social Change 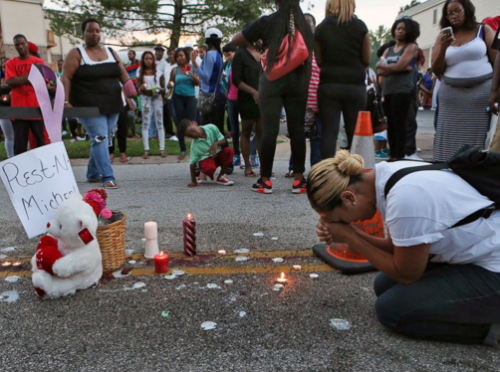 I have been reading the most recent posts on Sociology Lens and I was surprised to see that there has not been a post on the recent grand jury decision in not to indict police officer Darren Wilson in the shooting death of Michael Brown in Ferguson, Missouri. For weeks, a large portion of news coverage has been on the death of the unarmed 18-year-old black teen. Then Wednesday, a grand jury declined to indict another white police officer, Daniel Pantaleo, in the death of unarmed Eric Garner. There seemed to be so much to discuss but many of us remained silent.

Many bloggers, reporters, scholars, and writers will tell you there is an obvious problem in our society; a society where black men and boys are perceived as such a treat that they are being handled with deadly force by our police department. However, I feel there is another epidemic that is equally problematic in our culture, white men and women disengaging from this topic and failing to understand how race relations impact everyone of our daily lives, albeit in different ways.

Why is it so difficult for white men and women to comfortably discuss the recent deaths of Brown and Garner and the grand jury decisions not to indict Wilson and Pantaleo? There is more than it just being an uncomfortable topic. I can only speak for myself but I believe my experience is familiar to many privileged people. For me, there was ignorance, enlightenment, and guilt, followed by silence. “Who am I to speak out on this issue?” I fear I lack the experience or knowledge to speak up. However, we cannot be silent forever, not if we want change.

I was born into a white middle class family in the small Mid-western town of Stevensville, Michigan. My community was both typical and unusual in a number of ways. With less than 1500 residents, I had one of those childhoods where everyone knew everyone else in town. People stopped their cars in the middle of the road to talk to their neighbors. Residents did not always bother to lock their doors at night. And over 90% of the village population was white. I went to public schools without much thought of my personal safety. Police officers were good if you were in trouble but bad if you were speeding or drinking.

Less than 10 miles away was Benton Harbor. Benton Harbor was ten times the size of my town, home of the Orchard Mall, and as long as I could remember a place you needed to be careful and cautious. Although Benton Harbor was once a prominent lakeside town, by the time I was a child it was “dangerous place.” People rumored cars frequently got hijacked. It was said that gangs ruled the streets after dark. I remember hearing that drug traffickers used the town as a midpoint stop between Chicago and Detroit. What we did not discuss was that almost 90% of the population was black.

So this is how I grew up. Most of the time I stayed in the white town Stevensville and when I ventured into Benton Harbor to go to the mall or see a movie I was reminded to be careful and smart. If anything happened to me I should immediately contact the police. Even though you knew there might be one or two corrupt officers, the majority of them were there to help you. And that one time I drank too much and mouthed off to a police officer, I was not restrained with deadly force; I was taken home.

When I packed my bags and left for Chicago (and later Boston and New York) I took this mentality with me. However, as my world got bigger I learned that my experience was not the same as others. Some of friends were afraid of the police. The police had harassed a number of my friends. As I got to know more men and women of color, I began to hear more and more stories of police harassment and police misconduct. When I started studying sociology I learned more of the complex relationships between race and law enforcement and the historical struggles between innocent men of color and our justice system. I understand justified anger. I had my own injustices that were eating away at me. However, my academic work went in a different direction and I spent less time discussing race outside of an intersectional framework.

Even if I choose not to focus academically on race relations, I cannot escape the fact that race impacts our social reality. It plays out in each of our day-to-day lives. I know it takes my partner (who is not white) longer to go through airport security than it takes me. We do not talk about this. But we should. We get quiet when his young son states that he is the only boy of color in a restaurant or points at other children who look like him. I hope they talk about this together but the discussion has never occurred while I am around. The subject is changed. The topic is dropped. The comment ignored. Once again I find myself thinking, this is not my place to speak.

So as the events unfolded in the grand jury decisions and the rioting and protests that followed I did not judge the actions of those caught up in centuries of injustice and anger. But I also did not speak out. I did not say what we all should be saying, regardless of what occurred between Darren Wilson and Michael Brown or Daniel Pantaleo and Eric Garner something is clearly broken. Something needs to change. And it is time for those of us who are afraid to speak to try. For even if our lives have played out differently, the flaws of our systems are being exposed and now it is time for change.