Spotlight on Race, Justice, and the City: International Journal of Urban and Regional Research

Cities and urban regions are the site where the world’s most pressing concerns are increasing. For the last 40 years, IJURR has been at the forefront of critical debates. The Spotlight On series publishes original, online-only pieces that offer new insights and perspectives that we hope will generate discussion and debate 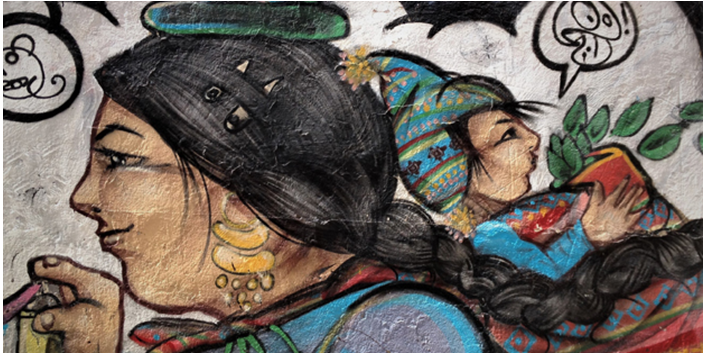 Graffiti art in La Paz’s city centre depicting an Aymara woman with her child. It is through such art installations that indigenous peoples increasingly take over and transform a historically ‘white’ city. Photo by Philipp Horn.

Race, Justice and the City

For the new issue of IJURR’s Spotlight On web series, scholars working in a variety of settings  critically reflect on the contemporary inscription of race on urban space, in light of the growing prominence of local and transnational racial justice social movements. The six resultant essays presented here come together to form a clarion call that mirrors those movements in their varied forms. This call demands that urban scholars recognize with urgency the ways that black lives have been excluded from and rendered invisible in urban space. It also calls attention to diverse forms of resistance that are emerging to address this exclusion. These essays highlight some of the many groups working in cities across the globe to make themselves visible and to assert their humanity in the face of dehumanizing processes.

Theorizing Racial Justice and the City: Learning from the ‘Tuvel affair’
Kate Derickson

Read more about these essays here. The editors have also selected several articles previously published in IJURR which speak to the themes of racial exclusion and struggles for justice on the urban terrain and which are free to view. These articles demonstrate discourses around race and marginality that have animated debates in urban studies over nearly thirty years. Among these is Loic Wacquant’s exposition on the study of the American Ghetto which sparked significant debate around epistemologies of race, place, and power. They also give a sense of breadth of how scholars have conceptualized contestation, from riots to musical expression.

Past and current editors of IJURR share histories and stories and engage in a bit of debate.  Watch the video interviews.

A collection of articles chosen by the previous Editors that they felt were of particular significance during their time working with the journal. Read the Virtual Issue

Right-wing Populisms and the City

A new political landscape organized around xenophobia, Islamophobia and racial-ethnic division and exclusion is emerging. We invite papers addressing questions of the role of the city, the urban experience, and urban politics in such resurgent right-wing populisms.

A groundbreaking forum for intellectual debate, IJURR is at the forefront of urban and regional research. With a cutting edge approach to linking theoretical development and empirical research, and a consistent demand for quality, IJURR encompasses key material from an unparalleled range of critical, comparative and geographic perspectives. Embracing a multidisciplinary approach to the field, IJURR is essential reading for social scientists with a concern for the complex, changing roles and futures of cities and regions.