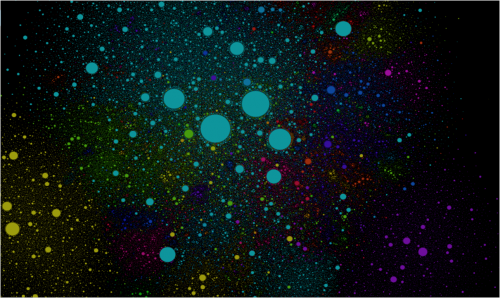 Doubtless I am not alone among the contributors to Sociology Lens in having been exposed, during my first year as an undergraduate, to an array of foundational thinkers in sociology (and anthropology) who present human history as a movement away from ‘traditional’, ‘face–to–face’ or ‘kinship–based’ societies, towards those in which interaction and identity is less relational, and more individualized. Such theorizing is not only limited to the classical sociologists who wrote in the 1900s, like Ferdinand Tönnies and Émile Durkheim; it resurfaces again in the sociology of the 1990s. In the writings of Anthony Giddens, “the self” is seen less as a product of interactions and relations with others, and more as a matter of individual “self–fashioning.” Or, as Giddens (now Baron Giddens) wrote in 1991, “in the context of a post–traditional order, the self becomes a reflexive project” (p. 32).

And yet, this literature on individualization and self–fashioning as the signature mode of existence in ‘modernity’, associated not only with Giddens but also with Ulrich Beck and Zygmunt Bauman, becomes increasingly difficult to square with the ongoing proliferation of apparently ‘social’ measures and projects: from ‘social enterprise’ or ‘social business’ and ‘social return on investment’, to the even more ubiquitous social media platforms and social marketing initiatives. In the UK, the National Centre for Social Marketing describes social marketing as an approach that uses behavioural economics (see Roger Tyers’ post for Sociology Lens here) to change behaviour for the benefit of “society as a whole.” Similarly, the UK’s national body for social enterprise describes such enterprises as businesses that “trade to tackle social problems…when they profit, society profits.” And the New Economics Foundation’s vision of social return on investment tools are described as alternatives to conventional cost–benefit analysis, which “does not consider anything beyond simple costs and price.” Social return on investment tools thus incorporate “social factors” when accounting for the value generated by an investment.

But what exactly is going on here? For some, perhaps, these methods for generating and measuring ‘social’ value may be nothing more than a smokescreen for the extension of market rationalities into previously insulated domains of our lives. David Harvie, for instance, has argued that the apparently well intentioned moves towards social investment in the UK are “designed to harness community based ethical concerns for the purposes of profit–making.” (It is perhaps not without significance that Harvie identifies Anthony Giddens, the sociologist who purported to describe a movement toward individualization, as a key figure in reconstructing the ‘welfare state’ as the ‘social investment state’.) The danger, Harvie notes – and Eve Chiapello has made a parallel point in her ongoing work looking at ‘social investment’ in the French housing sector – is that social investors demand not only a clearly defined social impact, but a “competitive” rate of return. Since what monetary units or ‘units of capital’ do is make the profitability of different ventures comparable, Harvie argues, a social investment in probation work in, say, Peterborough will force those probation workers “to compete with probation workers in Liverpool, the waged workers and unwaged volunteers running a youth employment skills project in East London [and] the workers employed by FTSE100 Companies.”

Anthropologists studying that even more ubiquitous ‘social’ domain, social media, have, however put a rather different interpretive spin on this apparent return of the social. Daniel Miller, for instance, is a long–time critic of the sociologists like Bauman who view consumption as a manifestation of individualism and individualization, rather than as a social process through which persons are made via their relationships (see here and here). In a precursor article to his 2011 ethnography of Trinidadian Facebook use, Tales from Facebook, Miller argued that Facebook “radically transforms the premise and direction of social science,” challenging the assumption with which this blog post started, that “human societies exhibit a slow but constant trajectory away from what are taken to be an earlier state in which people lived in communities, based around close kinship ties and devotion to immediate social relationships” (pp. 2–3). Facebook, argues Miller, allows us to once again recognize that persons can be understood as sites of social networking, and that our acts become meaningful because of our place in a particular network. Miller in fact goes further, arguing that Facebook parallels very closely the Melanesian Kula exchange systems with which anthropologists are so often preoccupied, and thus “exemplifies what anthropologists mean by the word culture” (p. 19).

How might these two approaches – Harvie’s critical response to the return of the social in ‘social investment’ as a cynical extension of the market into community ethics, and Miller’s embrace of social media as the ‘proof’ of what anthropologists and sociologists have been saying about meaningful human interaction all along – be reconciled? One possible solution is offered by William Davies’ recent article for the European Journal of Social Theory, in which he describes the ‘return of social government.’ Davies directs the Political Economy Research Centre at Goldsmiths, and is the author of the recently published The Happiness Industry, a critical take on the rise of well–being measures, something that he sees, along with the rise of social media platforms like Facebook, as part of the return of social government.

Davies’ understanding of ‘the social’ starts, like Mitchell Dean, with Michel Foucault’s understanding of the birth of ‘society’ as an object of government in the eighteenth century: thanks to new statistical techniques for measuring, surveilling and intervening in populations (the same techniques that early sociologists would use for their studies), ‘society’ or ‘the social’ became an empirical object that was also something that needed to be managed. Society, for Foucault (and Dean and Davies), emerged at the boundaries of the newly emergent ‘free’ or liberal market, which created possibilities for putatively spontaneous interactions, and the sovereign state, which claimed to rule an antagonistic mass of unruly subjects through legal means. The excess, ‘society’ or ‘civil society’, filled the gap between the individual interests of the marketplace and the sovereign will of the state.

Then, in the mid–twentieth century, in the context of an ideological battle between state socialism and ‘free’ market capitalism, ‘neoliberal’ thinkers like Friedrich Hayek challenged the notion that state planners could ever measure or commensurate the will of the populace; instead, governance was to be carried out through the market. As Davies puts it, in Hayek’s view, “the market arguably rescues the spontaneity of the ‘social’, even while it abandons its normative and general dimension. The market, from a Hayekian perspective, is a spontaneous social order” (p. 8). Hence the disappearance of the ‘social’ from late twentieth century governance (and late twentieth century social theory, which seemed sometimes to ventriloquize the Hayekian vision of individual preference formation – Giddens might call it “self–fashioning” – in the marketplace).

The point of Davies’ paper is, however, to make sense of the re–appearance of social investment, social media, and social interaction in what might seem like a ‘post–neoliberal’ period. Falling somewhere between Harvie and Miller in his analysis, he suggests that the rise of social media may in fact offer a serious challenge to market logics that went unforeseen by neoliberals like Hayek. Where Harvie’s criticism of social investment is based on the idea that units of money or capital render different investments comparable, and so would force social investments to compete with other, more profitable (less ‘social’) endeavours, Davies suggests that social media or social networking itself offers an alternative to ‘price’ that could displace market–based organization:

“Social media offers a technology which formalizes everyday social life, in ways that are neither reducible to price, nor deduced from centralized statistics … The everyday user performs their social life via Facebook, Twitter et al., while the expert contributes to this new formatting of the ‘social’ through application of methodological techniques for spotting the movement of trend and behaviours…when computer power is decentralized, and operative in everyday social interaction, [the Hayekian] claim for the indispensability of the market begins to disintegrate” (p. 13)

This is an intriguing claim, although Davies is not entirely hopeful in his conclusions. A new mode of generating spontaneous order through social networking that does not rely on price can just as easily be deployed as part of a ‘pre–emptive’ state security apparatus based on ‘profiling’ your interactions (on which see this open access paper by Marieke de Goede and Louise Amoore). Or, as The Ippolita Collective put it in their recent reader for the Institute of Network Cultures, profiling is the “promise of freedom automated: contextualized advertising, research into users’ sentiments to provide personalized, tailored ads in order to maximize click–through sales” (p. 60, emphasis added). And, Ippolita remind us, Facebook, more than any other social media platform, has been brought to the world through the efforts of venture capitalists like Peter Thiel, who has taken from Hayekian neoliberals a belief that freedom exists in the marketplace, but has come to reject the notion that “freedom and democracy are compatible.”