Classification and the NSA: The Power of Silence 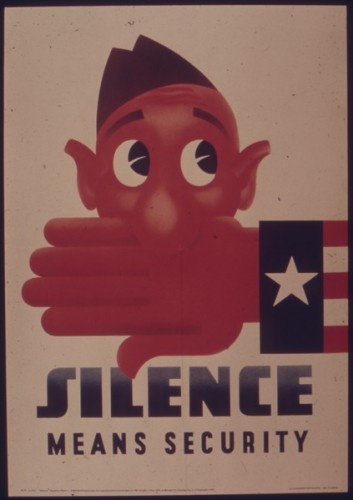 The chief of the National Security Agency, General Keith Alexander, made his first public comments since Edward Snowden exposed the NSA’s PRISM spying program.   The media aftermath of Snowden’s revelation generated multiple narratives surrounding the program. Media coverage focused on privacy concerns, the criminality of Snowden, and the necessity of the program to protect America’s safety.  Lost in the production of these various discourses, there were also narratives that did not emerge, that remained silent.  The absences of particular narratives are rarely innocent oversights, but a result of presenting controlled narratives. The lack of coverage of certain views can be explained through a framework recognizing the constitutive role of silence in our everyday lives. In particular, a focus on silence can teach us to ask what is not said, for instance, why was the PRISM program classified in the first place?

Foucault (1981) argues that discourse is constituted by the things we say, but it is also constructed by what we elect not to say. Foucault is alluding to the power of silence in our everyday lives. The power to prevent certain speech presupposes of the primacy of power in social relations and it is the capacity to exercise power that provides some with the ability to silence others.  The Executive Branch has considerable power to control silence through its power to classify documents as top secret. In 2011, over 76 million documents were classified “secret” in the United States by over 4 million government employees. The power of the Executive Branch to control what is said and not said to the general public has brought criticism from former government employees.   Thomas Keane, who chaired the 9/11 Commission, reported to Congress that “three quarters of classified information he reviewed for the Commission should not have been classified in the first place.” Further, J. William Leanord, former Government classification czar, filed a formal complaint against Justice Department regarding their abuse of classification power. The power to control what is made public and what is not made public provides considerable power to silence narratives. Within this discourse of silence, we can understand the messages that are not told, or the questions that are not asked, implicating silence as an important part of our language.

Hallsworth and Young (2008) expand the conception of silence by arguing that all persons are confronted with silence in our day-to-day lives and we play a role in the construction of silence.  Hallsworth and Simon (2008) expand on the role of silence when discussing the link between crime and the media. They suggest there are four key players when examining crime: perpetrator, victim, witness, and control agent (i.e., law enforcement).  In every mediated communication there is the perpetrator (news outlet) who has a vested interest in discussing a particular point of view on a subject. The media conglomerates that fail to present a critical discourse represent the status quo, and in this instance the assumption that the American people do not need to know certain information. As consumers of knowledge, people become the victim, witness, and control agent. The consumer is the witness through viewing the news, the victim through the exposure to myopic discourses, and the control agent because of the potentiality to call for greater coverage.

The work of Foucault and Hallsworth and Young show the value of silence in deconstructing the messages told through the media.  The media’s coverage of the National Security Agency’s PRISM program does not address the necessity for transparency. It is through a framework that we can recognize the importance of what is not said. It is also possible for anyone to consider the role of silence in our everyday lives. You can start small by considering the sounds that are absent in your surrounding (i.e., the sound of bugs, cars, or shouting kids).  Or when watching the news you can ask yourself what point of view is being ignored, or what questions are not being answered. By considering the silence as a part of our everyday language we can improve our understanding of mediated discourses.