The Spectacle of War or, Reality TV on the Front Lines 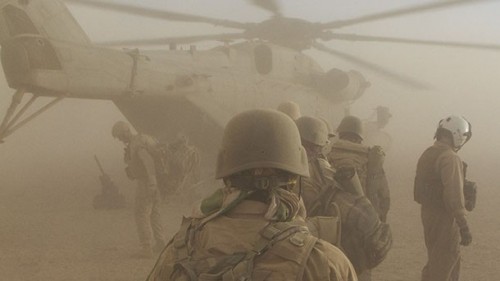 Battleground Afghanistan and Eyewitness War are two new shows premiering on National Geographic Channel this July. Both reality dramas follow the firsthand experiences of soldiers on the front lines of combat, as they engage in battle and carry out a variety of missions for the American military. And although these shows have yet to begin, I’d like to pose some “guiding questions” for those who might end up watching them.

Mass media dramatically affect our understanding of war. Katy Parry’s review article on news images in war raises a relevant point: namely, “that footage of conflict often presented to viewers as ‘objective’ coverage actually participates in the legitimation of war” (2010, 419). In part, this may be due to the fact that images do not exist in a vacuum. For audiences to interpret imagery, they require some discourse that situates what they are seeing—who the heroes or villains are, where the combat is taking place, why the conflict is happening, etc. When the images seem to correspond with the hegemonic discourse about that war, they may lend credence to the official story.

So, will these new shows challenge or legitimate the American military presence abroad? Without seeing the shows, it is hard to know, but we can speculate. Perhaps reception of the show will be guided by the popular discourse of “the troops,” which seems to be rather bifurcated: first, the “support the troops” no matter what camp, which imply that, regardless of your stance on the war, you should refrain from criticizing it in order to show appreciation for the troops who risk their lives; or second, the (support the troops so) “bring them home” camp, which suggest that having the troops’ best interests in mind means ending war and returning troops to their families. Perhaps one of these will be the guiding narrative, providing audiences with an intended interpretation. But, audiences are not passive receivers; they use their own references and experiences to actively interpret what they see. Whatever the interpretation, it is clear that these images will not be innocent, cannot be innocent, when they serve to represent violence and power.

Images are tools, and can even be weapons. They do not simply depict the truth—they reflect, but also construct meaning. Significantly, with regard to these new shows, the images are highly manipulated, even as they appear to be “reality” TV. As Jelle Mast explains, “reality TV” is an incredibly complicated media, and as an umbrella genre, it encompasses many different forms of TV programming. One definition of the genre suggests several components, including: filming (or recreating and then filming) the experiences of groups or individuals, often with handheld equipment, and then packaging these into a TV program that can claim some veracity or authenticity. But at this definition implies, the images are molded—by producers, writers, directors, and even the individuals being filmed—into what we see as “real life.” It is interesting to note that the mediation that takes place to create a reality TV show is not much different than what takes place when creating a traditional “documentary,” where materials are also cut and assembled according to the subjectivity of the filmmakers (see Minh-ha, 1991 for more on this point).

Eyewitness War claims to show you “the dangerous missions and perils of war through the eyes of our brave American service members” in a way that is “[u]nfiltered, raw and intense” and Battleground Afghanistan “looks inside the latest chapter of the Afghan conflict as seen by American Marines.” What we will really be watching are technologically mediated images captured by a camera again another for soundtrack, perhaps even narration. Along the way, writers may be involved to create a coherent plot line out of the weeks or months of footage. Pieces are deleted or reconfigured to fit the plot; individual “talking heads” (where the people involved sit alone in front of a camera, and sometimes a producer, to describe the event and how they felt about it) may be added to create or solidify a narrative. All of this work, all of these levels of narrative and meaning, all to create the image of reality. And in this case, of war.

For those who tune in to these shows, the questions will be: what does this show say about the American presence in Afghanistan, or about war generally? What do we learn about the men and women (and masculinities and femininities) in conflict? What story(ies) do these shows tell us about the nation? And what can we learn about our society from the story being told, knowing full well that it is one made for, not revealed to, us.

Mast, Jelle. 2009. Documentary at a Crossroads: Reality TV and the Hybridization of Small-Screen Documentary. Sociology Compass 3(6): 884-898.