What’s the true meaning of the 1914 Christmas Truce? 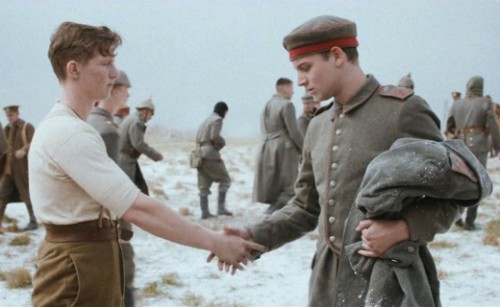 Since August in the UK we’ve been commemorating the outbreak of WW1. The various reasons for this memorialising overlap, but they can reflect an individual’s political Weltanschauung and attitudes to the Great War. For some, the 800,000+ Tommies who died sacrificed themselves in a heroic struggle against the forces of militaristic totalitarianism represented by Germany. While for others, the WW1 represents plutocrats sending young men to their deaths while many industrialists and manufacturers profited from Britain’s war economy only to then lead us, via economic ruin, to another war 21 years later.

There’s less cynicism about the Christmas Truce. This means it’s been hijacked by everyone from supermarkets to UEFA and restaged as a football match to market their values (incidentally there is little evidence any football match took place let alone one between German and British and Commonwealth troops). Although for many combatants the truce was primarily a magnanimous gesture to bury the dead, it was a reality and, indeed, in some sectors of The Western Front, it lasted for longer than Christmas. Troops in these instances were threatened with execution if they didn’t reengage in killing the enemy (for more listen to eyewitness accounts in the Imperial War Museum’s Archives).

Apart from obscuring us from some of the realities of war (new evidence shows snipers still claimed kills during the ‘ceasefire’) the truce’s sentimentalisation is encoded with all sorts of messages. Not least the spirit of Christmas is the medium through which the soldiers expressed their essentially non-violent humanity. Accordingly, if we remember this event and its inverse; the horrors that succeeded the truce, then this reminds us to get on with the building humane liberal democracies: that represent war’s antithesis. Every commemoration like the Christmas Truce therefore, when it ritually describes the futility and pity of war, contributes to what Elias called the “civilising process” within which we distance ourselves from physical violence.

In a new article in the Sociological Review Steve Hall argues the real reason for this process is not to “establish a peaceful, sociable existence for human beings” but to “maintain a safer environment for the intensification and democratic expansion of aggressive yet rule-bound sociosymbolic competition”. This suggests we haven’t banished war by commemorating it. As Aldous Huxley said; “That men do not learn very much from the lessons of history is the most important of all the lessons of history”. The “constant eruptions of state violence” (Hall 2014, p15) such as the wars in Iraq and Afghanistan have seemingly ignored the message of the memorialisation rituals. Indeed, these wars have become assimilated into the rituals. Accordingly Hall argues: “We must consider the possibility that the liberal-capitalist epoch has not been characterized by a civilizing process” but “a pseudo-pacification process” (p13). “The mass-mediated consumer culture now presents as a surrogate social world” (p23). Within this world our violent drives are mobilised by neo-liberal ideology that incites us, via the acquisition of work promotions or luxury consumer goods, to achieve status-superiority over our neighbours or ‘rivals’. We can see played out to a satirical pitch in reality TV shows such as The Apprentice. Our socioeconomic project becomes a:

“Hegemonic culture of measured aggression to fuel the dynamic force of social competition in the economy. As well as eager consumers, the system’s logic also requires leading subjects to act as role-models and ‘movers and shakers’ at the cutting edge of its unforgivingly competitive economy, occasionally ruthless ‘undertakers’ who are willing to risk harm to others in order to ‘get things done’ in their functional business lives in a sublimated, rule-bound mode of action that constantly pushes against ethical boundaries.” (p27)

As the Christmas truce suggests people are not immutably ‘evil’, yet if Hall’s thesis is correct and our socio-economic system ever collapsed, violence and war will never be far away. When the “endless supply of opportunities for economic prosperity and sociosymbolic ascendance begins to look empty” (p29) warmongers will achieve ascendancy again.

Yet for a few days in 1914 there existed the necessary conditions for a peace treaty that those with power to enact it chose to annihilate. The truce, does at some level, therefore offer the hope that war is never inevitable .