Local Level Immigration Control: A Necessity or a Justification for Discrimination? 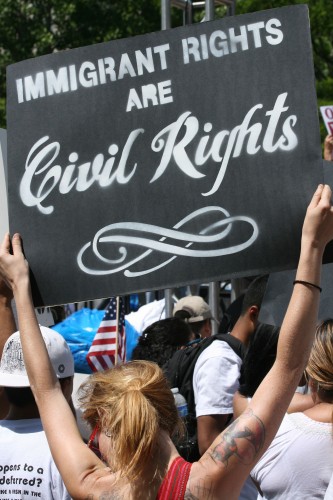 On May 10th, the Department of Justice (DOJ) filed a lawsuit against Sheriff Joe Arpaio of Arizona’s Maricopa County.  The suit alleges that the man who claims to be “America’s toughest sheriff” has propagated a culture of discrimination against Hispanics and Latinos during his time in office.  More specifically, it is argued in the lawsuit that Arpaio’s office has consistently permitted the violation of the civil rights of Hispanics and Latinos in its quest to crackdown on illegal immigration.  It is alleged, for instance, that the sheriff’s office has failed to discourage discriminatory policing and that is has launched patrols based solely on reports of dark-skinned individuals congregating in a given area and/or speaking Spanish.  The lawsuit further claims that Arpaio and his office do not track allegations of deputy misconduct.  Although federal officials had been working with Arpaio to reach a settlement before filing the suit, talks broke down in April.  At a news conference the day before the lawsuit was filed, Arpaio claimed that he has done nothing wrong and that he is being unfairly targeted by the Obama administration.  The DOJ contends, however, that the sheriff’s office is practicing a type of law enforcement that is neither constitutional nor effective.

In many ways, the alleged discrimination faced by Hispanics and Latinos in Maricopa County is similar to the discrimination faced by immigrants coming to the U.S. over a century ago.  As pointed out in an article by Gunkel and Wahl (2012), these newcomers were often seen as constituting a “dangerous class.”  As a result, they often had their rights violated with officials using the argument that “crime control” necessitated such actions.  Although recent decades have witnessed far less blatant acts of xenophobic discrimination, Gunkel and Wahl insist that the U.S. is once again systematically violating the rights of immigrants in this country.  And many of these violations, the authors assert, are taking place at the local level.  This is because even though the federal government has typically been tasked with the responsibility of controlling immigration, cities and states have become increasingly involved in developing and enforcing immigration-related policies and programs.

One common program aimed at curbing illegal immigration at the local level is the 287(g) program.  Instituted in 1996 as an amendment to the Illegal Immigration Reform and Immigrant Responsibility Act, this program gives participating law enforcement agencies the right to enforce federal immigration law.  The program is intended to specialize in the arrest and detention of criminal aliens.  Though the program is overseen by Immigration and Customs Enforcement (ICE), its detractors claim that 287(g) is often used to justify racial profiling, particularly against those who appear to be Hispanic or Latino.  It is also claimed that the program is far more likely to interrogate, arrest, and deport those individuals accused of committing non-serious crimes than those accused of committing serious crimes (ACLU 2009).

Despite such allegations of bias and inefficiency, however, the public continues to support the use of programs like 287(g) that allow local law enforcement agencies to tackle illegal immigration on their own.  Much of this support likely comes from the common belief that immigrants, especially illegal immigrants, represent significant crime threats.  It may then come as a surprise to many to learn that research indicates that immigrants are actually less likely to commit crimes than are their native-born peers (Sampson 2008).  In reference to Hispanic and Latino immigrants, some scholars (e.g., Stowell and Martinez 2007; Haddix 2008) claim that there even exists a “Latino Paradox” in which first-generation Hispanics and Latinos are less likely to commit crime than would otherwise be expected considering their socioeconomic disadvantages.  Adding strength to the idea that Hispanic and Latino (legal and illegal) immigrants are not a major crime threat, it has been found that the violent crime rate of Arizona dropped from 2005 to 2008 even though the population of undocumented residents in this state increased over the same time period.

So, considering that (1) empirical evidence does not support the supposed immigrant-crime nexus and that (2) local level programs like 287(g) are often plagued with allegations of racial/ethnic bias and ineffectiveness, should communities continue to be allowed to act as stewards of immigration control?  In Maricopa County, Sheriff Arpaio has used his 287(g) agreement with ICE to commit the kinds of discriminatory conduct that has led to the recent filing of the DOJ lawsuit.  Given such problems, should local level programs like 287(g) be terminated or do they represent a sort of necessary evil when it comes to identifying illegal immigrants who do pose a significant crime threat?  What do you think?

Stowell, Jacob I., and Ramiro Martinez Jr. 2007. “Displaced, Dispossessed, or Lawless? Examining the Link Between Ethnicity, Immigration, and Violence.” Aggression and Violent Behavior 12(5):564-581.