If You Plant It, They Will Come: Anti-GM Protest in Aotearoa New Zealand and the United Kingdom 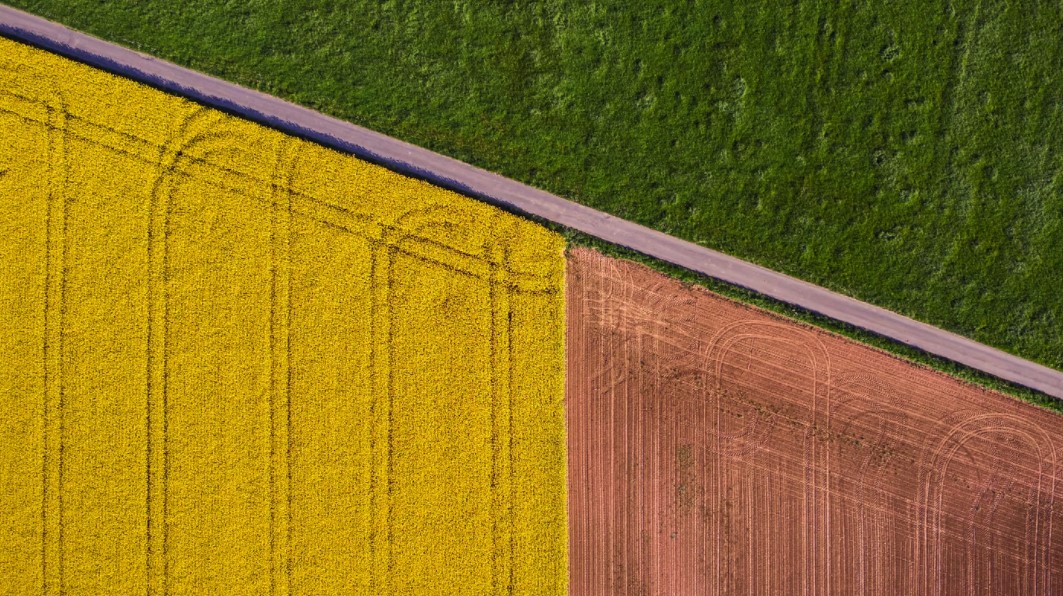 On 13 October 2003 Friends of the Earth led a group of 1000 people on a march through London to Downing Street to present a petition opposing the continued development of genetically modified crops in the UK (Brown, 2003). A week later in Wellington, Greenpeace erected a billboard on the grounds of Parliament asking why the Prime Minister was not listening to the peoples’ concerns over genetic engineering (New Zealand Press Association, 2003). Both these events came in the latter stages of sustained campaigns of opposition to the development of genetically modification in NZ and the UK, as shown in the figure below. Beyond the surface level similarities in the temporal pattern of opposition, there were some more fundamental differences, reflecting the divergent approaches taken by the state with regard to the new technology. Paying attention to these differences can assist in understanding the way in which opposition was mounted in response to the opportunities available and the challenges faced. 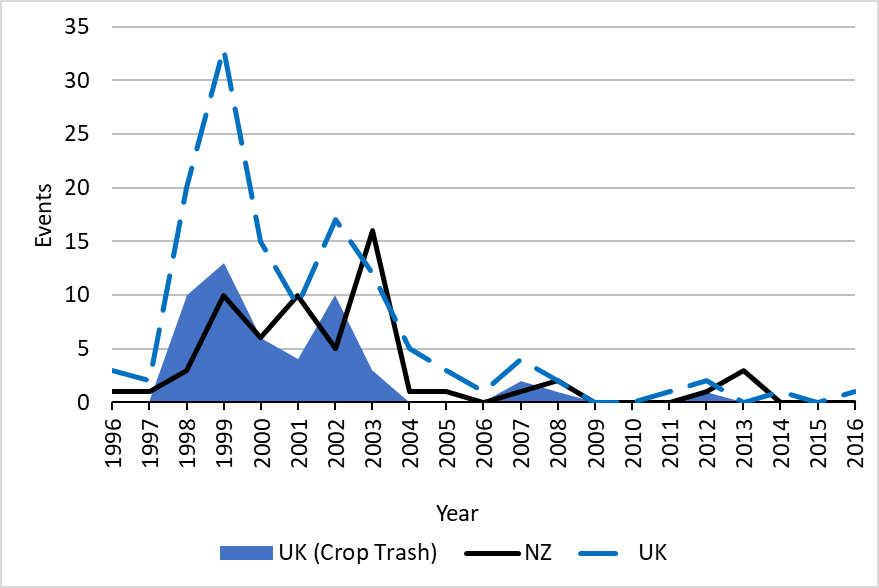 The potential of genetic modification was advanced by governments in both countries during the late 1990s. The respective governments argued that the new technology presented opportunities to reshape the ways in which food and other crops were produced, with benefits such as increased yield and reduced pest impact. Uncertainty around genetic modification gained greater attention in 1997 and 1998, as it was revealed that genetically modified soya was being used in processed foods and being stocked in supermarkets without being labelled. In New Zealand, this resulted in a more precautionary approach, as the government introduced a temporary moratorium on the release of genetically modified organisms and convened the Royal Commission on Genetic Modification (RCGM) in July 2000 to consider the risks and opportunities. Reporting in July 2001, the RCGM suggested careful exploitation, with the government introducing a moratorium on field trials until October 2003. The UK government, in contrast, permitted a series of 258 Field Scale Evaluations (FSE) of genetically modified crops and launching the GM Nation? consultation to gauge the views of civil society actors and the broader public. In spite of these divergent approaches, there was a shared presumption by the state in favour of exploitation of the technology.

Faced with this determination to move forward with genetic modification, opponents mobilised within the environmental movement and more broadly. Much of this opposition focused on concerns over safety of genetically modified products, capitalising on the sense of uncertainty that characterised their development and potential effects. The contemporaneous controversy over BSE in the UK cast an important shadow, challenging the trustworthiness and transparency of the organs of the state. Considering the patterns of protest there is a clear link to the way in which the state chose to handle the management of the technology. Opposition in NZ ramped up over the first years of the new millennium, as opponents of genetic modification pressed to make the moratorium permanent. Something that was ultimately unsuccessful, leading to a collapse in active protests. The UK in contrast saw a fall in the level of protest following a peak in 1999, as the government stepped back from plans for commercialisation. The more sustained fall in anti-GM protest after 2003 coincided with the government’s decision to move away from wide-scale exploitation in favour of more small-scale and discrete scientific research trials.

Within these broad patterns, the character of the protest campaigns had some important differences, although both targeted state and private actors. Supermarkets featured as an important site in both cases, as activists attempted to raise awareness among consumers of the presence of GM products and ingredients. Alongside conventional demonstrations, both movements engaged in more controversial, destructive acts. In the case of GM crops this was driven by the availability and legibility of such objects. Identifying GM as a source of uncertainty and potential threat meant that crops could be presented as legitimate targets. Covert actions against research labs and trial sites sought to disrupt and derail progress, raising the threat that there would be a backlash, similar to that faced by animal liberationists.

One area where there was considerable difference was in the destruction of field trials. Whereas in NZ there were no recorded acts of crop destruction (only three actions damaging lab trials), the UK saw 50 such events (see figure above). This was primarily a result of the availability of targets, as the large-scale Field Site Evaluation programme in the UK (2000-2002) provided many potential targets. The majority of these acts were conducted covertly, to reduce risks of detection that would result in the action being stopped or participants being detained. Despite this, a third of actions took place overtly, often involving groups wearing decontamination suits or costumes entering a field trial site and damaging crops in full view of observers. This raises an important question about why individuals would be willing to risk prosecution and what they hoped to achieve.

Uncertainty around the potential effects of GM crops drove opposition from environmental movement actors, but it also had an effect on farmers. By entering fields and damaging crops in an overt manner, activists were signalling their concern, while also attempting to demonstrate a wider sense of unease within the community. As opposed to covert actions that could be dismissed as vandalism, acting openly provided opportunities to address observers and present a claim for consideration. Highlighting the sense of uncertainty around GM crops prompted consideration about the management of the rural space and the potential threat to production and protection. They also tapped into deeper histories of rural resistance and the contested nature of rural spaces. Conversely, in NZ, the relative absence of field trials meant that the contest over GM remained a largely urban phenomenon, focusing on the potential risks for the consumer.

The campaigns against GM technology in NZ and the UK shared a number of similarities, as the argument was grounded in a sense of uncertainty. Where they differed was in the forms of actions that they were able to take, which were shaped by the actions of the state in each case. Ultimately, both were successful, in that large-scale, commercial development of GM crops was halted. In both cases, this result was the outcome of campaigns that were able to generate and maintain legitimacy in the eyes of the general population, making it unviable for the state to continue on a path towards adoption. What these examples demonstrate is the complicated dance between state and civil society actors, as each attempts to demonstrate their legitimacy and win support of the wider public audience.

Thomas O’Brien is a lecturer in the Department of Sociology, University of York. His research focuses on environmental sociology, democratisation, leadership and social movements. Recent work has been published in British Journal of Sociology, Journal of Cultural Geography, and Eurasian Geography and Economics. @TomOB_NZ t.obrien@york.ac.uk