The Necessity of Disorder in a Soft City: De Certeau vs Foucault (Part I)

This is a two-part guest post by Bea Moyes, who is an independent researcher based in East London. Having completed a Masters in Research at the London Consortium, Bea is working on ongoing research into the history of East London since the 1970s. Her work has often considered histories and narratives of urban space, particularly through the act of walking the city, and with dynamic and creative interactions which are generated in public spaces. She tweets @BeaMoyes 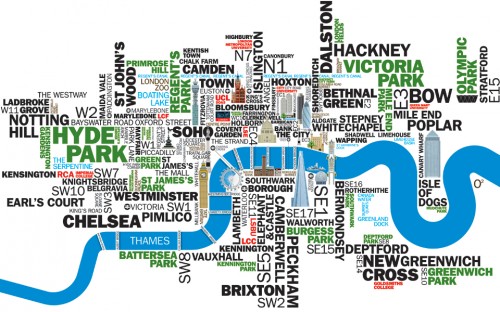 “For better or worse, [the city] invites you to remake it, to consolidate it into a shape you can live in.”

In his novel Soft City, written in 1974, Jonathan Raban eloquently drew out a vision of London as a fluid city. A city in a continuous process of making and re-making by its inhabitants. A postmodern city whose central locus was not imposed and pre-constructed, as with modernist urban utopias like those of Le Corbusier, but a palimpsest. Malleable and in constant state of construction.

My own research into the fluid fabric of the city has concentrated on the social and cultural shifts in East London when Raban was writing in the 1970s. I am looking, in particular, at the influx of artists whose DIY activities and collectives were instrumental in the transformation of this area of London. Again and again looking at this period I have returned to a central debate between the two French theorists, Michel Foucault and Michel De Certeau, regarding the power relations in the spaces of everyday life. A debate which hinges not only on how we see the city, but how we continue to construct future cities.

For Foucault power relations are everywhere, as mechanised actions, attitudes and functions in daily life. But in his vision of discipline and power, his panopticon; Foucault focused primarily on the imposition of power on the individual and the construction of environments and mentalities which ordered and controlled society. In his work The Practice of Everyday Life Michel De Certeau openly criticised Foucault’s instrumental power relations, suggesting that individuals (agents) often had power either through accepting these power relations, but also be resisting and manipulating them as consumers. De Certeau drew distinctions between the ‘strategic’powers, and the ‘tactical’resistances to these strategies through the re-appropriation of resources, spaces, language and narrative. To use an example to explain the differences between De Certeau and Foucault: a boss might impose work hours on an employee, but at the same time an employee might resist this control by spending time on Facebook or on the phone during their work hours. While Foucault’s work necessarily drew attention to the increasing move towards organisation as a central issue of power, De Certeau brought focus to the complexity in this one-directional flow of power. To the agency of individuals in re-ordering these very flows, and the actions of the everyday as the locus of this subversion.

When considering the complex organism which is the city, I would assert that in effect both Foucault and De Certeau are right. For De Certeau’s ‘tactical’ activities to exist, they must have strategic powers to resist. As Gibbons has suggested, the binary of strategies and tactics are not unique, but dynamically interconnected and interrelated. To look at it another way, we can consider their debate through Newton’s law of thermodynamics. In Newton’s second law there is an acknowledgement of entropy, the natural move of energy from systems of order to disorder. Systems of order and coldness require energy to be maintained, from the refrigerator to the white room. But, within rigidly constructed systems, there is little room for manoeuvre, improvement or collaboration. For cities to work therefore, there is a need for strategic powers of control which bring organisation and order. But, on the other hand, for cities to be malleable spaces which are friendly, inclusive, communal and vibrant; there needs to be a bit of disorder so that individuals have agency and input over the spaces and environments they occupy. For the city to be a space which an individual can remake, it needs to allow the agency of its inhabitants. To invite the individual to reform it into a space they could live in.