Smart phones, Simulacra, Prince and The Matrix: Why I (also) don't want to be a Digital Witness 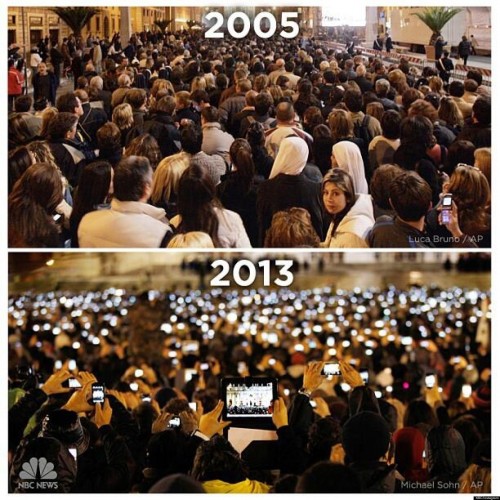 Avid Sociology Lens readers (as I am sure you all are) will have already read Roger Tyler’s piece this week; “Digital Witness: Memory vs. Experience”. In it, he discusses his experiences of attending Glastonbury Festival and the summer solstice at Stonehenge, and how in both cases he felt showed examples of how obsessed we have become with the need to document and record our experiences as they are happening. Even as the fireworks go off or the sun comes up, we all reach for our smart phones; as if, if we don’t record something and share it with our friends it cannot possibly have happened.

By a strange coincidence (either offering support for the issue, or implying lack of imagination, I’m not sure which…) I was in the middle of writing an almost identical piece this week. Given that I am lazy, and there is no such thing as too much Sociological analysis, I want to build on the points made in the article, and see if I can usher in a few more theories along the way.

For me, the catalyst for thinking about this issue was attending a Prince concert in London a few weeks ago. Prince has a history of being quite demanding and cagey about people recording him without permission (he is one of the few artists that has successfully sued individuals for posting his songs on Youtube, for example), and so when the email came through beforehand requesting that we did not take photos during the performance, I wasn’t surprised. I had also heard stories of people being ejected from the venue for taking pictures at early shows, presumably for the same reason. We were reminded again at the gig numerous times before the show started, and the show itself opened with his band, 3rd Eye Girl, coming out to remind us not to take pictures. Their reasoning was so similar to St Vincent (as Roger discusses) that I suspect one took the idea from the other; “Don’t take pictures, because we want you to experience things in the moment”.

The ability technology has to prevent us appreciating what it actually is to be ‘in the moment’ reminds me of one of my favourite lines from the comedian Dylan Moran, as a response to people’s outrage that he doesn’t use the internet.

“People look at you like you just fell out of a tree, you know, and they’re appalled, and they say, “Well, why not? You know, you can’t be up to date.” And you think: How can I be any more up to date? I’m alive now! That’s pretty current where I’m from.”

It is strange how we have convinced ourselves that being ‘up to date’ or ‘in the moment’ necessarily means experiencing something whilst also recording it, and offering it up as our own performance. The ubiquity of smart phone technology has made this easier than ever. Like Roger, I am concerned with this because it also means the creation of an unnecessarily large amount of ‘Crappy pictures’. A quick search on Instagram or Twitter shows this easily; thousands upon thousands of pictures that in no way come close to demonstrating what is was actually like to be there. Everyone is a photographer, a creative. This is not to denigrate the creative possibilities of these technologies, but it often isn’t any more creative than simply proving that ‘I was there’. It goes on like some kind of cyclical validation cycle: (Take picture of Prince, tweet picture of Prince so everyone knows I am here and what a great time I’m having, tag my friends who are also here, then their friends will also know what a great time we’re having watching Prince), and repeat ad nauseum, rather than just leaving our phones in our pockets and actually watching Prince.

The worrying thing about this habit is not necessarily the obsession with the recording itself, its that by recording and repackaging we end up with something that is simultaneously less good and more important to us than the original was in the first place. The recording, the image or the neat (re)construction stops being a representation of the experience and instead becomes the experience itself. As with Baudrillard’s Simulacra: “It is the map that engenders the territory”, and the boundaries between experience and imagined experience cease to exist. Much like the Matrix (one of my favourite go-to metaphors), the imaginary or exaggerated/tidied/smoothed/filtered memories are more real than the reality was in the first place.

I hope this is not the case, and I especially hope that more artists, musicians, lecturers, speakers have the initiative to ask people politely not to make their work into a simulacrum. Or perhaps instead, will find ways to integrate the desire to record with their own artistic integrity; as in recent play Privacy or Amanda Palmer in her riposte to the Daily Mail, both of which instructed the audience to get out their smart phones in order to be part of the entertainment. Mostly, I hope that we will not be the last generation to enjoy the experience of turning the recording off and just being ‘In the moment’. Whatever that might mean.