Why We Definitely Need Feminism 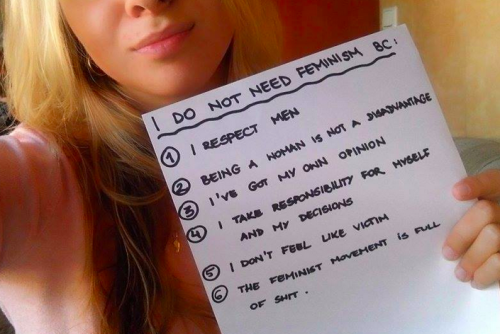 Recently, one of my acquaintances sent me a link to a blog called “Women Against Feminism.” The site is a response to the “Who Needs Feminism” campaigns that emerged a few years ago. Now, anyone who has spoken with me for more than five minutes (or read anything I have written) probably has a clear understanding of my political position on feminism, equality, and human rights. I have spoken and written on the issue of feminism, post-feminism, and anti-feminism so often that it surprises me how strongly I still react to this kind of propaganda. I continue to be shocked and upset by the ways in which feminism and feminist agendas are warped and distorted by both men and women. Thus, once again I felt compelled to respond and defend feminism, the continuous fight for gender equality, and basic human rights.

Here are some of the reasons women today reject feminism:

#1.  “I don’t need feminism because I am an adult who is capable of taking responsibility for myself and my actions.”

I agree with the latter. I am an adult and I am also capable of taking responsibility for my actions. However, I cannot always be responsible for the actions of others or the ways in which other people’s actions impact my physical, emotional, and psychological well-being.

In a recent discussion of sexual violence, this argument about “personal responsibility” arose. Survivors of gender based violence, even the most “perfect victims,” frequently struggle with the line between personal responsible and those things that are beyond their control. The bottom line in this discussion was that no survivor is EVER responsible for his or her assault.

Feminist agendas that follow this line of reasoning are not promoting personal irresponsibility. Rather, they are promoting a culture that does not excuse violence and inequality by framing it as either choice or personal responsibility.

#2. “I don’t need feminism because I am not a target for violence.”

Are you sure about that? In many cases, survivors of violence were not doing anything out of the ordinary when they were attacked. They were relaxing at a party. They were with a friend, neighbor, or someone they thought could be trusted. Every two minutes another person in the United States is sexually assaulted and almost 2/3 of all rapes are committed by someone the victim knew (RAINN 2014).

There has historically been a collective feminist push to “breaking the silence” around sexual assault. However, this agenda had nothing to do with framing women as victims or targets. Rather, it allowed women to become empowered by speaking about their experiences and seeking help for coping with the trauma of sexual violence. In fact, feminist activists played a key role in illustrating sexual violence is a common experience for many women and girls. Today we know that nearly 1 in 5 women (and 1 in 71 men) have reported experiencing sexual violence (CDC 2012).

#3. “I don’t need feminism because I don’t choose to ignore the fact that men have issues too.”

Of course men have issues too!! I cannot think of one respectable feminist writer who would argue with this statement. In fact, many gender scholars frequently look at the intersectionality of oppression for both men and women. Race, religion, sexuality, and class all impact our ability to access privilege as well as the various forms of discrimination we face.

Programs such as the White Ribbon Campaign, which is a movement of men and boys working to end violence against women and girls and promote gender equality illustrates the ways in which men’s issues and women’s issues are interwoven. Collaboration between men and feminist organizations has increased in recent years often highlighting the ways in which gender equality can improve the lives both men and women (Flood 2011).

#4. “I don’t need feminism because I don’t need to belittle men in order to life myself up.”

Yes, there were a handful of radical feminists writers from the 1960s and 1970s who might be labeled as “anti-man” but today most feminists strive to create healthy alliances between men and women. The myth of the man-hating feminist is just that… a myth.

#5. “I don’t need feminism because I don’t want to politicize my gender.”

As I was writing this post, the blog was updated and another batch of reasons why women “don’t need feminism” popped up on my screen. One new addition read:

Actually, it does. Feminism is a movement that strives for political, cultural, social, sexual, and economic equality.

The girl holding this sign cannot be older than twelve or thirteen. My heart was literally breaking as I read the rest of the reasons she does not need feminism, which include:

Clearly, we need feminism now more than ever.