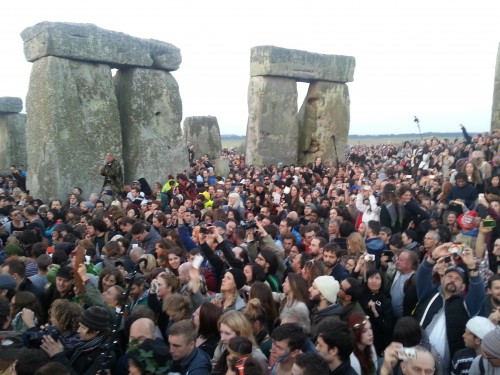 Stonehenge at dawn on summer solstice, 2014

I have recently had the double-privilege of going to Stonehenge to witness the sunrise on summer solstice, the longest day of the year, and then onto Glastonbury festival, to witness er… lots of live music and people dancing around in mud. I’ve been to Glastonbury many times before but Stonehenge was my first time. As you can see, I captured some of it on my camera-phone, and naturally I wasn’t the only one. The photo above prompted a friend of mine to comment that it “Looks like more people enjoying it through their phones than their eyes”. At first I felt a bit defensive, because I was guilty of the same thing, but I thought it was ok. What’s wrong with taking a few pictures of a special event in an auspicious setting?

But in a sense, my friend was right. There was something a bit sad, a bit vulgar, a bit weird, about thousands of people watching this spectacle of a Stonehenge sunrise through a camera lens rather than just experiencing the moment using our trusty five senses. The same thing happened again and again at Glastonbury: people taking their phones out to take pointless crap photos of the performers on stage. These photos are made even more pointless by the presence of dozens of professional photographers who were documenting the weekend’s events for various newspapers, TV stations and websites. They have better cameras, they know what they are doing, and it’s safe to assume that they’ve probably drunk much less than the punters, so why not leave it to them? Yet I’m as guilty as anyone else of this. What is wrong with me?! 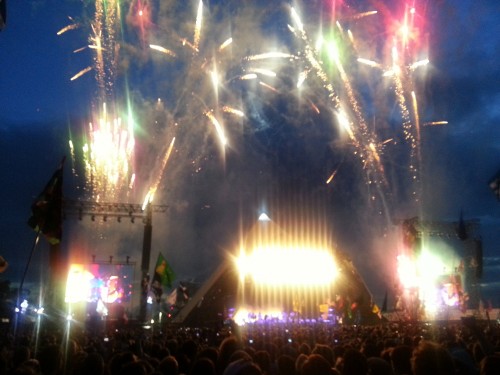 My best attempt at photography, during Arcade Fire’s Glastonbury 2014 set.

Kahneman argues that it is the remembering self which usually dominates. Our minute-to-minute experiences are mostly discarded and forgotten by our brains, mostly out of necessity – we have so many experiences that we don’t need to retain them all, and the majority of them are trivial anyway. It is the remembering self which tells others (and ourselves) the stories of our past, by picking out key events and making sense of them in some kind of narrative.

Kahneman’s research has shown that the remembering self can often be ‘tricked’ and he gives two examples. Firstly, if a particular experience ends well we are more likely to remember the whole experience in a positive way, even if the rest of the experience was nothing special. I suppose this is why bands always end a show with a hit song, or why films with weak endings usually disappoint. All’s well that ends well.

The logic of modern technology seems to attend to our remembering self very well – too well, perhaps. We can reach into our pockets, record films, take photos, edit them with Instagram to make them ‘better’ than the actual experience, and upload them to the internet. If you can’t remember where you were in October 2009, then your facebook timeline will remind you, with documentary evidence. Our remembered ‘life story’ almost doesn’t require remembering on our brains’ part anymore because so much of it is documented for us. Four days worth of video is uploaded to youtube every minute – who needs to remember? And indeed, who needs to experience anything when we can look at the world through other people’s eyes (and camera lenses). Someone managed to take a photo of St Vincent By Piergud (Own work) [CC-BY-3.0 (http://creativecommons.org/licenses/by/3.0)], via Wikimedia Commons

One act I saw at Glastonbury is American singer-songwriter St Vincent, whose set began with a recorded announcement requesting that the audience refrain from taking photos or videos and to “live in the moment”. At first I thought this was a slightly pompous request and one which would be ignored, but people respected her wishes (even snap-happy me), and it reminded me to allow myself to enjoy the present rather than taking photos which I could look at in the future to remember the past. One of St Vincent’s most on-it lyrics comes from her recent single ‘Digital Witness’: “Digital witnesses, what’s the point of even sleeping? If I can’t show it, if you can’t see me, What’s the point of doing anything?” points to this modern technological fixation with documenting everything. I’m no Luddite and I enjoy taking my crappy pictures, but sometimes we need to enjoy the present, rather than obsessively capturing the past for future reference.
Share on Facebook Share
Share on TwitterTweet
Share on LinkedIn Share
Send email Mail
Print Print
Share