Enemies of the State: untangling anarchism from the government shutdown 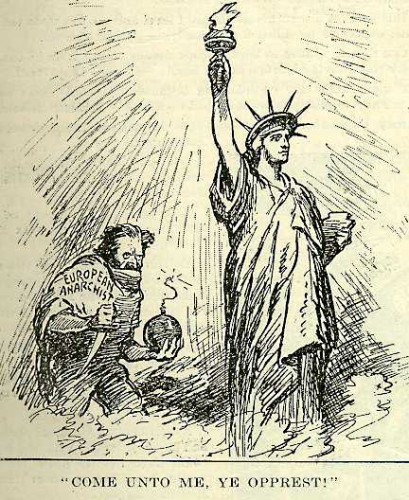 At the time of this posting, the government shutdown drags on, the debt default is on the horizon, and Democrats and Republicans are waging the battle of blame. Spin is, of course, business-as-usual in politics. Figuring prominently into this fight is the question of who is acting responsibly.

What stands out to me, as a student of social movement studies, is one particular strategy to smear opponents as irresponsible and therefore dangerous: the recent persistent use of the term “anarchist” by Senate Democrats to describe Republican politicians and the Tea Party social movement with which they are aligned. This approach is exemplified in Senator Elizabeth Warren’s blog post earlier this month entitled “We are not a country of anarchists,” and has been echoed repeatedly by other politicians, including Senate Majority Leader Harry Reid in his claims that anarchists had taken over Congress.

The strategy of labeling, or lazily misidentifying, your opponent’s political philosophy in order to delegitimize them is sadly, nothing new. It was not so long ago that “communist” was used by authority figures as a code word for evilness and otherness. Accusing someone of being a communist was effective partly because it did not require defining in any way what a communist, or communism, was. The label itself contained the sum of what respectable people in society needed to know about you in order to judge you.

This labeling is connected to the broader assaults against social movements. That the demonizing of anarchists has now migrated from police departments to local politicians to federal security services to the highest echelons of political power is indicative of other historical trends. The growing use of “anarchist” as evil corresponds to the resurgence of anarchism as an influential force in the global justice movement in the 1990s, carrying on through Occupy. A decade now of concerted government attacks and repression against the anarchist movement in the United States has seen thousands arrested, hundreds jailed, and many serving long prison sentences in which their political ideology has served as an argument for increased punishment.

Interestingly, the Democrats’ rhetorical strategy has unintentionally created new movement opportunities as more interest is being shown in the question of who and what an anarchist actually is. There is new space for education about social movements and the history of social change. Heather Gautney, a sociologist at Fordham University, seized the opportunity in a recent op-ed in The Washington Post. She breaks down the differences between the beliefs held by Tea Party members and supporters and the political views and practices of anarchists to show that a critique of the state is not necessarily a uniting factor between groups with such widely varying perspectives and aims. Gautney explains, “Anarchists want to prefigure, within their own communities, the egalitarian societies they seek to create. In a political system like ours, which is dominated by money interests, they do not acknowledge institutions like the U.S. Congress as legitimate representatives of everyday people, nor as agents of a truly free, democratic society.”

These developments and changing rhetorical landscape should be of interest to scholars, both as it relates to our work and to potential risks of repression against our colleagues. At present, the interdisciplinary field of anarchist studies is growing and gaining visibility, drawing scholars from sociology and anthropology, history, cultural studies, gender and sexuality studies, political science, education, religious studies, and geography. Scholars share their work at annual conferences put on by the North American Anarchist Studies Network, and non-profit organizations such as the Institute for Anarchist Studies exist to financially support radical writers and translators working to develop anarchist thought. Some even work on outlining possibilities for an anarchist sociology, “a long anticipated marriage,” according to Dana Williams and Jeff Shantz (2011). They contrast and compare the origins, goals, and theoretical frameworks of sociology and anarchism, argue for a synthesis of the two for a more powerful tool to understand society, and outline sociologies of freedom, anti-authoritarianism, direct action, mutual aid, and decentralization.

Contrary to Senator Warren’s claim, these developments make it clear that anarchist thought is certainly represented in the U.S. and elsewhere. As Gautney notes in her op-ed, “Anarchism seeks to diffuse power based on hubris, superiority and the conceited pursuit of wealth, and re-root it in democratic principles and egalitarian ethics.” At least Warren is correct in claiming such an aim is a threat to our system as it currently exists.