The Commodification of the American Farmer 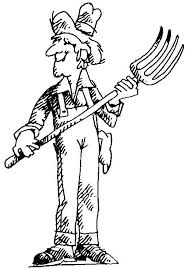 The American farmer is becoming a central figure in the advertisement world and two recent commercials standout for using the image and ethos of the small, hardworking farmer to sell their products.  During Super Bowl XLVII, Dodge Truck made a commercial called “god made a farmer.” The commercial shows a series of still shots of American farmers working hard and the narrative describes the hardships associated with an honest day work on the farm. The commercial focuses on the small farmer using his hands, rather than the more common use of mechanized equipment to accomplish farm work. A second commercial created by Chipotle romanticized the movement away from mass farming and towards the small farmer fighting the corporate machine to produce “wholesome” food. The Chipotle commercial critiqued the mass-farming of animals and received backlash for co-opting local food movements. Both commercials speak to the notion of the isolated American farmer attempting to make it on his/her own in a corporate world, placing the value of hard work as an American ethos. The construction of the farmer in this manner is not intended to provide support or to recognize the struggles of small farms, but to sell products. Nor does it allude to the goal of most farmers—to make a living.

The commodification of American farmers is part of a larger culture industry that generates normative images that people can consume as reality. The American farmer becomes homogenized rather than focuses on the trivialities and difficulties encapsulating what constitute a small farmer.  According to the U.S. Census an establishment is a farm if it sells more than $1,000 of agricultural products a year. Based on this definition there are over 2.2 million farms in the United States, but over 25% of farms make less than $50,000 dollars a year making it difficult to make a living. The commercials celebrate the small family farmer, and it is true that over 80 percent of farms are family owned; however, the number of farms has been shrinking over the years. In 2007, the USDA indicated that under 200,000 farms accounted for over 65 percent of agricultural sales. This indicates that the small farmer may not be as small as we think. In fact, since 1935 the number of farms in the United States peaked at 6.8 million but has since declined, while the size of the average farm as increased from 27.5 acres in 1935 to 740 acres in 2000. The increasing size of farms has been aided by large-scale mechanization (farm equipment), pesticides, and crop varieties.  The use of mechanization naturally leads to a reduction in the use of manual labor and the farmer’s hands to accomplish their tasks. The reality of farming is that it has become a multi-billion dollar industry. The increasing yields for farmers, stable markets, and government subsidies have lined the pockets of farmers. As a result, farmers have turned to buying new equipment to ease their burden, further pushing them away from the notion of the small American farmer.

The use of mediated depictions of farmers to sell products falls under what Horkheimer and Adorno (1944) refer to as the culture industry. The process where mass production of images become homogenized and the trivialities and distinctions which exist in all forms of life get pushed aside. The Dodge Super Bowl add is surely accurate in that some farmers wake up early, work hard, and are capable of being self-sufficient; however, it does not show the farmers who are unscrupulous or unskilled. It does not show the farmer who desires better equipment but cannot afford to purchase because they do not own their labor. The focus on the individualism and hard-work speaks to the corruption of culture that capitalizes on cultural memes. These commercials cheapen the realities of farming to generate a ritualistic, homogenized, and capitalistic authenticity that exists far outside of the realities of farming.

The romanticizing of the farmer is not as much the result of self-driven hard work who wants to maintain the old days–although they do exist— rather, the farmer is trapped because off the economic conditions, the exploitation of labor, and the imperative need for debt to expand. All these factors place the small farmer in a precarious position of debt, failure, and stagnation. While awareness to how agriculture economics operates, and the struggles of small-farmers and labor is needed, the co-opting of the American farmer for the commodification of pick-up trucks and large-scale fast food industry is at best disingenuous and worst the latest manifestation of the exploitation of labor.