North Korea: Good news for people who like bad news Name the first famous Korean that comes into your head. Unless you’re (a) Korean, (b) majoring in East-Asian studies or (c) showing off, you’ll probably say Kim Jong-Eun, the western media’s favourite Evil Dictator. Kim, like his father, makes it oh-so-easy for stories about him to quickly become clickbait. The dynastic backstory, brutal haircut, penchant for Dr. Evil-style Maoist tunics, countless silly titles, affection for basketball, Dennis Rodman and overeating – add in the very real nuclear ambitions, the forced labour camps and the numerous hyperbolic threats to North Korea’s enemies, then you have a character you couldn’t make up. Publicity-wise, Sony knew they were pushing on an open door when they commissioned The Interview, but I doubt that even they could foresee the series of events that have made the film their most downloaded release ever.

I lived in South Korea for two years as an English Language teacher. In the months before I went out there I bought a travel guide to the country to find out the places I should visit. I immediately flicked past all the main sections – the big cities Seoul and Busan; the country’s many mountain ranges and national parks; beaches and temples; amazing restaurants and markets – and straight to the book’s short chapter on North Korea. Like most people, it was North Korea which really intrigued me, and I promised myself I would, at some point, go on one of the over-priced government-arranged tours there. In the end I never did enter the mysterious North, unless you count crossing five metres over the border at the surreal tourist destination of Panmunjom. 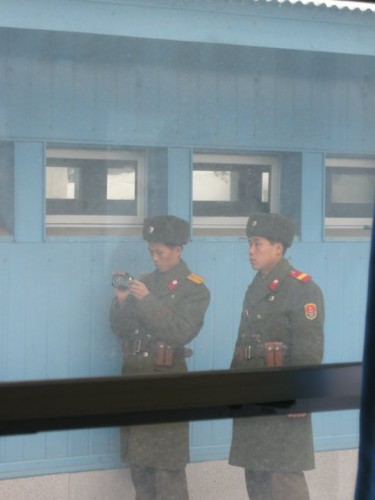 North Korean soldiers at the edge of The Free World, Panmunjom, Korea

In fact, by the end of my two years, having watched all the Vice documentaries, attended various public lectures and read many books on the subject (I particularly recommend Nothing to Envy by Barbara Demick), my opinions on North Korea changed from curiosity to a sad resignation. In this sense, I had acquired the same attitude that most South Koreans have to the North – it’s not funny, it’s not scary, it’s just sad.

The Kim regime is back in the news thanks to The Interview and the rather extraordinary events which have surrounded its release. I’ve seen it, and I must say I found it pretty funny in a very daft, dumbass kind of way. The fact it was made is amazingly cocky and provocative – you might even say brave. I’m happy that the film will turn the spotlight back on North Korea, and that the film has rattled Kim and his cronies enough for them to hack its producers Sony, trying (and ultimately failing) to force them to not air the film. I’m happy that the film has made it into China, where apparently viewers have enjoyed the film despite it mocking their neighbour and supposed-ally. I’m most happy that the film will almost certainly make it into North Korea on illegal DVDs and USB sticks smuggled across the border, because while the Kim dynasty is a recurring joke to us in the West, within North Korea the idea of laughing at his expense is about as subversive and dangerous as it gets. Making fun of the Supreme Leader won’t bring a revolution, but satire is healthy, no more so than in a totalitarian state.

In the longer run, Kim Jong-un will continue to be the most famous Korean in the world, much to the frustration of the fifty million south Koreans who know there are so many more positive public figures which their country has produced. Some of the biggest positions in global politics are currently held by Koreans: UN Secretary General Ban Ki Moon is Korean, and the World Bank is headed by Korean-American Jim Yong Kim. In music, the most-watched video on YouTube is still Psy’s ‘Gangnam Style’, and in Chan-wook Park, director of ‘Oldboy’ (recently re-made in Hollywood), South Korea has arguably the most successful contemporary film-maker in East Asia. Reading this on your phone? There’s a one in four chance it’s a Samsung, designed in Korea.

Whilst in western countries our knowledge of Korean culture might be limited to horse-dancing Psy or sabre-rattling Kim, we should not underestimate the reach of Korean cultural exports around the world, often described as Hallyu or the ‘Korean Wave’. K-pop music and Korean TV dramas are huge business in China, Taiwan, South East Asia and the Middle East. As Euny Hong, author of The Birth of Korean Cool explains, in many Muslim countries, Korean TV dramas are far more popular than American ones, due to their lack of sex or bad language and their emphasis on family. Thanks to Hallyu, and much to my embarrassment, my Turkish friend at uni knows more of the Korean language than I do, even though I lived there for two years and she’s never been there. 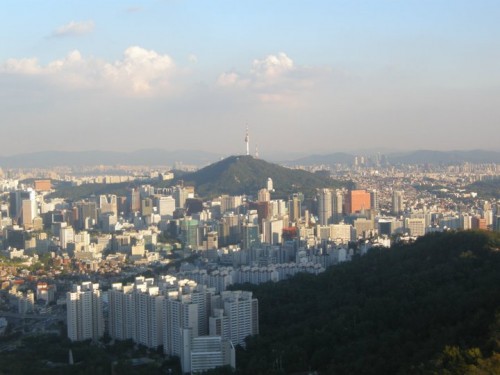 Seoul is only 50km from North Korea, but feels worlds apart.

When I was living in Korea, the hyperbolic threats coming out of the DPRK washed over most people. Much to my frustration, my friends preferred to discuss ‘good news’ stories about music, celebrities, sport or just everyday life, rather than politics in Pyongyang. When the North Koreans moved missiles to the East Coast in April 2013, significantly raising the temperature and hogging headlines around the world for a few days, people on the streets of Seoul carried on as usual. For my South Korean friends, the military reality is stalemate; the political reality is that the Kim regime still has, against all odds, complete control over the North Korean population; and the social reality is that people in the South – especially young people – are increasingly uninterested in reunification. For South Koreans, nothing’s really changed with the North since 1953 – except now the rest of the world takes more of an interest.

Life can be hard in South Korea and the pressure to succeed in education, in the jobs market and in the market for wives and husbands is unforgiving. It’s perhaps unsurprising that they have the highest suicide rate in the OECD. The sad truth is that for South Koreans, despite all the repeated threats and provocations, life goes on and  there are far more pressing everyday problems than troublesome neighbours up North. That is bad news for the 25 million North Koreans struggling with poverty, a lack of food and no access to basic political and human rights, but it’s good news for journalists, bloggers (hi!), film producers, and the millions of us who just can’t get enough bad news. God knows, there’s no shortage of the stuff.