CONAIE Headquarters to be Shut Down: Indigenous Peoples of Ecuador Request International Support 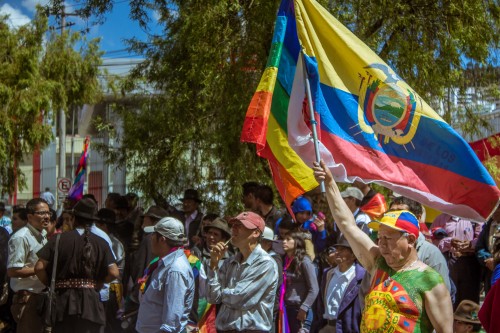 Protestors gather outside the CONAIE (Confederation of Indigenous Nations of Ecuador) in Quito, Ecuador.

Yesterday, in Quito, Ecuador, hundreds of Indigenous people from around the country, including those from the Amazon, the Sierra and the Coast, gathered outside the offices of CONAIE (the Confederation of Indigenous Nationalities of Ecuador), in the north of the city, to continue the fight against a government plan to close the organisation’s headquarters. CONAIE is among the largest and longest standing Indigenous organisations in Ecuador, and its work focuses on defending the rights, territories, culture and lives of millions of Indigenous people who make up approximately 25% of the country’s population.

I am writing this blog post to encourage academics and activists from around the world to sign the open letter, drafted by CONAIE, in support of the organization and the indigenous peoples that it represents in their struggle to maintain control of the building, which is a key strategic part of the indigenous political community.

The unilateral decision to evict CONAIE was made by the Government of Ecuador last month. On the 11th of December 2014, the Ministry of Economic and Social Inclusion (MIES) informed CONAIE that their building was to be converted into a center for treatment of people with drug and alcohol dependency. This would bring an abrupt end to a loan agreement that was reached between CONAIE and the Government of Ecuador during the administration of President Rodrigo Borja almost 25 years ago. CONAIE, however, has not only insisted that they will not leave, but have also demanded that they be given the official title to the government building, which has been their headquarters since 1991. 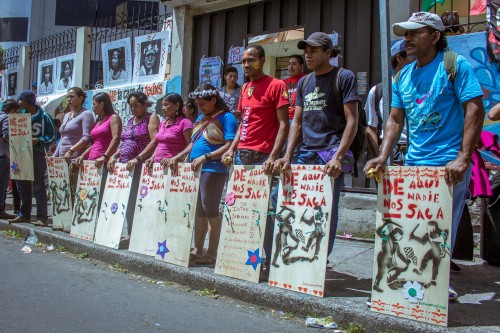 Protestors gather outside CONAIE with placards that read ‘Nobody takes us from here’.

During this time, the building has grown from a small communal space, where representatives of the numerous indigenous peoples of Ecuador would meet to discuss social and political issues, into a three story building that has become an icon of indigenous presence in Quito. Now, more than just a meeting place or a political and administrative hub, it has become the ‘home’ of indigenous people in Quito, and symbolizes “part of a process of historical compensation”.

On the 19th of December, CONAIE publicly declared a state of emergency in which they argued that the move to evict them is unconstitutional and that it “ lacks legitimacy since the CONAIE, as a government of the peoples and nationalities of Ecuador, is making use of the property in representation and defense of individual and collective rights of ancestral peoples and of the majority [and] it is therefore an act of political persecution against the Indigenous movement”

The attempt to close the building has also been described as a ‘direct persecution’ of Indigenous peoples of Ecuador by Nina Pacari; a Kichwa leader, lawyer and Judge of Ecuador’s Supreme Court. The eviction notice came at a time when Indigenous people and activists in Ecuador are particularly conscious of their political and physical vulnerability. Less than a month ago, in the lead up to the COP20 climate talks in Lima, the body of an Indigenous leader, José Isidro Tendetza Antún, who had actively opposed mining projects within the territory of the Shuar indigenous people and who was due to speak at the 2014 Rights of Nature Tribunal in Lima, was found dead with his arms and legs bound. Though it is unknown who committed the murder, some Indigenous leaders have expressed suspicion that the Government of Ecuador was complicit.

Oil exploration, mining and other extractive industries have long been, and continue to be, one of the primary points of contention between the Ecuadorian Government and Indigenous peoples, including CONAIE. For example, in November, 2013, following the government’s auction of thirteen oil concessions in the provinces of Pastaza and Morona Santiago on the Peruvian border, approximately 180 women and men of various Amazonian Indigenous Nationalities assembled to protest against oil drilling in Indigenous territories. After the march, at least eight Indigenous leaders, including the President and Vice President of CONAIE were placed under criminal investigation for their involvement in the protest.

Gloria Ushigua, leader of the Sapara Women’s Organisation (Ashiñwaka) petitioned the United Nations Permanent Forum on Indigenous Issues for support, claiming that the violation of constitutional rights had resulted in a ‘state of emergency’ for Indigenous people in Ecuador. This is not an isolated case. Over the past few years more than 200 people who have been involved in protests in Ecuador have been accused of terrorism.

Yesterday, following the arrival of the Indigenous people who marched to the CONAIE headquarters from all corners of the country, Betty Tola, Minister for Economic and Social Inclusion (MIES), announced that, though the deadline for CONAIE to leave the building was set for 6th January, they would not yet be evicted. However, this is only a temporary victory. It is the result of a motion for reconsideration, issued by CONAIE to the Government of Ecuador, which has been accepted and will delay the eviction by at least two months. Nonetheless, those who marched to CONAIE remain vigilant and will be occupying the building continuously over the coming weeks.

Below is the open letter issued by CONAIE. Please read it, share it, and sign it by sending an email to Alejandra Santillana (alesantillan@hotmail.com) or Pablo Ospina (halcon6719@yahoo.es), including your full name, country and institutional or organisation affiliation (optional). The original letter in Spanish, along with a list of signatories can be found here.

Last December 11th the Confederation of Indigenous Nationalities of Ecuador, CONAIE, received the notice asking them to leave the offices that serve as their headquarters in Quito by next Tuesday January 6th. They received these premises on loan in 1991 by the government of Rodrigo Borja.

You might know that the headquarters of CONAIE are a symbol of indigenous and popular resistance in Ecuador. Actions organised here include the 1990 indigenous uprising, the struggles for land and the recognition of indigenous territories in 1992 and the defense of the collective control of water. The proposal of the plurinational state was also conceived in this place. CONAIE has furthermore had a central role in popular mobilisations in Quito, such as during the struggle against the FTAA (Free Trade Agreement of the Americas) and then the Free Trade Agreement with the United States, against the shutdown of banks (“feriado bancario“) which destroyed the Ecuadorian economy in 2000, against the privatisation wave of the neoliberal era, and in the defense of indigenous territories from oil and mining development.

An open letter to President Rafael Correa (see below), circulated in the last weeks of December 2014, has already been signed by over 450 intellectuals and activists across the world. We invite you to sign it by sending an email to Alejandra Santillana (alesantillan@hotmail.com) or Pablo Ospina (halcon6719@yahoo.es), including your full name, country and institutional or organisation affiliation (optional).

Letters of support to CONAIE will be appreciated for sure, international solidarity is crucial now. You can send them to: info@conaie.org.

The signatories of this letter have been surprised by the news that the Government of Ecuador decided to revoke the loan agreement established in 1991 for the use of the building of the Confederation of Indigenous Nationalities of Ecuador, CONAIE.

In our view it is clear that the reasons given (the use of the premises for the rehabilitation of young people with addiction problems) are not satisfactory: a State like Ecuador has many places in better condition and location for such tasks. The measure is unjustified.

More than an act of retaliation this is disrespectful to the memory and history of an organisation to which Ecuador owes democratic struggles and extraordinarily profound and positive social transformation.

More than an administrative act without political intent, it seems to be a very disturbing evidence of sectarianism. More than an isolated act, it looks like the latest incident in a series of episodes of intolerance towards criticism from different social movements of the most varied kind.

In our opinion, the government does not need such outbursts and loses moral authority by using this logic of assertion of force and intimidation. It is not too late to rectify.

It would be a courageous act of political intelligence and generosity on your part if you gave positive proof of recognition of the historic emancipatory deeds of one of the largest organisations of indigenous peoples and nationalities of Ecuador.

The peoples of our America and the progressive forces of the world do not forget this glorious history. You should not ignore it either.