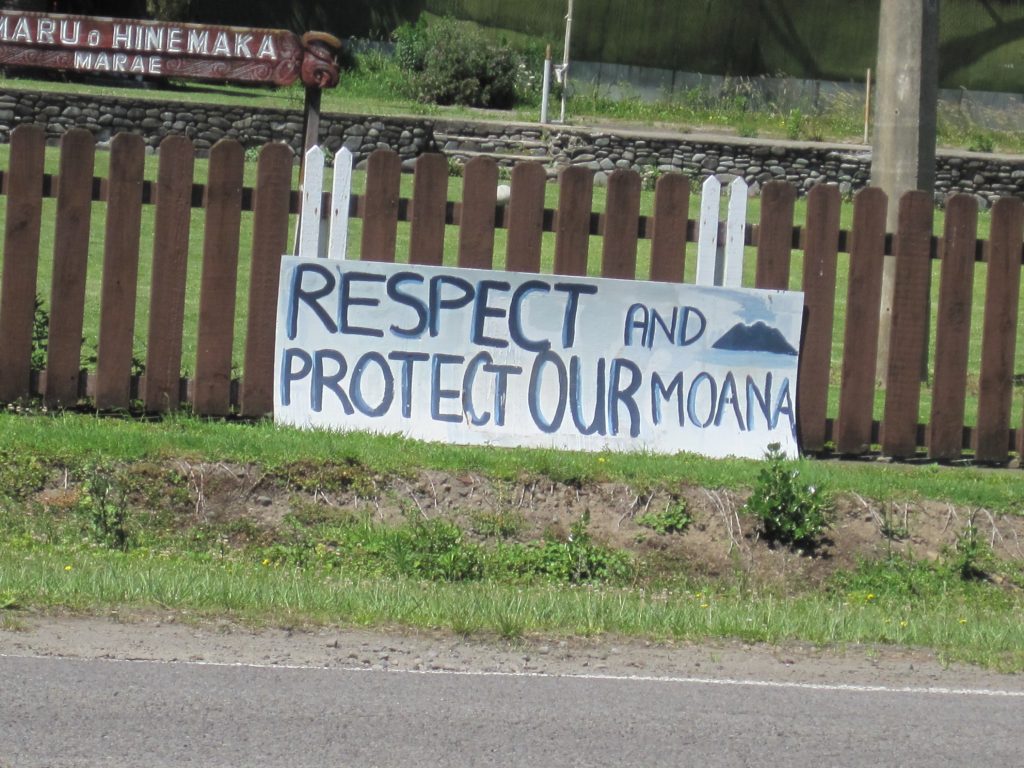 Raukokore, on the East Coast of the North Island, New Zealand. Photo by Thomas O’Brien 2013

In August 2015, around 120 people gathered outside New Zealand’s Northland Regional Council. They protested against closed-door briefings by Statoil on proposals to drill for oil, displaying placards and banners (such as ‘Hokianga Says No to Deep Sea Oil’), singing songs and chanting their call for exploration licenses to be revoked. This action was one of a number that took place around New Zealand after 2011, when the National Party led government (2008-2017) pursued offshore oil exploration within its drive for economic development. Alongside protest gatherings, opponents arranged flotillas to disrupt surveys, disrupted oil and gas conferences and co-ordinated days of action. This campaign was significant due to its sustained and diverse character, culminating in the incoming Labour Party led government (2017-) ending offshore oil exploration in 2018.

New Zealand presents a valuable case for the consideration of changes in environmental activism. As a country that brands itself ‘100% Pure’ and ‘clean and green’, it has an interest in maintaining the integrity of its physical environment. However, the demands of economic development and the opportunities provided by natural resources have challenged this ideal. In a 2012 paper on environmental protest in New Zealand (1997-2010), I highlighted the importance of the political context in influencing the emergence and success of environmental campaigns. Subsequent developments have further demonstrated this point, as the National government pursued a form of economic development more explicitly focused on resource extraction and exploitation. This post draws on an expanded dataset to revisit environmental protest in New Zealand, asking how issues, actors and responses have changed over the intervening years. 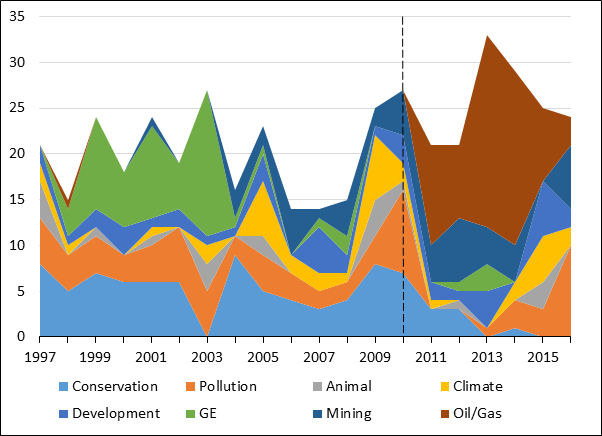 Figure 1 shows numbers of protest events between 1997 and 2016, focusing on identifying the range of environmental issues. These data were collated from a catalogue of environmental protest events (methodology is described here).  The dashed line represents the end of the time series in the original paper (2010). The persistence of activities focused on conservation and pollution is demonstrated, as well as the emergence of campaigns targeting genetic engineering (GE) (1998-2003) and oil and gas exploration (2011-2017). The difference between these two issue types can be traced to the degree of linkage: issues of conservation and pollution tend to occur on a more local level and incidents are less likely to be connected. By contrast, GE and oil and gas exploration represent national issues, making them more broadly recognisable targets and providing an opportunity for opposition to coalesce and form sustained national campaigns. 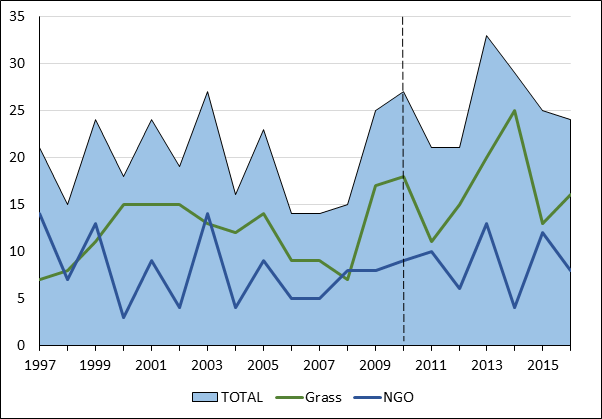 The change in character of protest and degree of organisation can also be assessed through consideration of the actors involved. Figure 2 suggests divergence between actions led by grassroots (or unnamed) actors and organised non-governmental organisations (NGO). Grassroots movements were more frequent participants overall, possibly as a result of having fewer formal channels for access. It is also demonstrated that, during periods of heightened contention such as campaigns against GE and oil and gas exploration, grassroots and spontaneous actions played a significant role. The lower informational requirements of grassroots actors and reputational considerations means such actors may be able to mobilise more readily. This was particularly the case in oil and gas protests, where the dispersed nature of the threat saw greater local action in support of the national campaign. 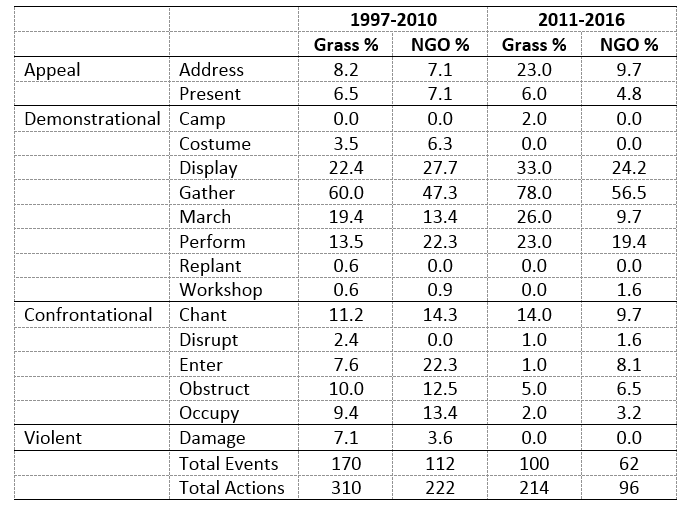 Turning to the forms of action, four broad categories can be defined: appeal, demonstrational, confrontational and violent. Table 1 shows the proportion of types of actions undertaken by each actor type over the 1997-2010 and 2011-2016 periods (with up to four actions per event). Demonstrational events were most frequent, as grassroots groups and NGOs organised gatherings and marches to present their claims. The 50,000 people marching against mining in National Parks in May 2010 represents an iconic example. The two groups differ in the adoption of confrontational forms, with NGO actors appearing to be more willing to engage in actions that could lead to arrest and prosecution. One of the more theatrical actions involved Greenpeace activists transporting a shed from the site of the proposed Ruataniwha dam across 100km, to the offices of Hawkes Bay Regional Council. Comparing the two time periods, there was a fall in confrontational actions in favour of those involving demonstrations and appeals. This may reflect the greater public awareness and localised concern over the possible effects of oil and gas exploration, making dramatic actions less important in mobilising support.

Reflecting on the dynamics of environmental protest in New Zealand over time, patterns of issues that animate action have been identified. The rise in the number of events around oil and gas from 2011 illustrate the reactive nature of the campaign, as the state pushed for mineral exploration. A similar dynamic was seen in the anti-GE campaign of the early 2000s, where the movement’s failure in the face of government intransigence following the Royal Commission on Genetic Modification and the end of the moratorium led to a move away from the issue. The data also suggest that issues addressing identity and the ideal of a ‘clean, green’ land are pivotal in mobilising support. Revisiting the finding of earlier paper, it is clear that government priorities continue to dominate. However, where the environmental movement is able to broaden the appeal of the claim success may be possible, particularly following a change in the governing party.