The events in Egypt prompted renewed attention to the phenomenon scholar Ayesha Siddiqa refers to as milbus (military-business)— military ownership of property and businesses (the Pakistani military peddling cornflakes is a particularly vivid example). Siddiqa’s 2007 book, Military, Inc., provided an account of the Pakistani military’s involvement in the countries economy, including hotels, shopping malls, insurance companies, banks, farms and an airline (see a review here). She defines milbus as “military capital that is used for the personal benefit of the military fraternity, especially the officer cadre, but is neither recorded nor part of the defense budget.” 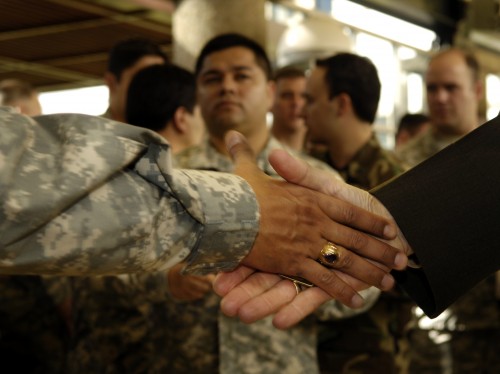 Some of the most pressing and frustratingly opaque issues during the ultimately successful Egyptian protests involved the military: what role were they playing in the conflict, who was the leadership loyal to, what were their long-term intentions for the country?  There was plenty of speculation, and little definitive knowledge among media observers. A segment on the NPR program Planet Money posited that the military did not violently repress protests at least in part because of their interest in not alienating their consumer base. As Robert Springborg, a professor of National Security Affairs at the Naval Postgraduate School, argued, the Egyptian military was primarily interested in stability during and after the protests in order to protect its businesses. This theory of the army’s behavior relies on the assumption that the Egyptian public both knows which businesses are military-owned, and has other options for buying necessary goods, neither of which I have the sources to address.

After relative stability emerged in the 1970s, and after the 1979 peace treaty with Israel, the military found themselves with many more young men in their ranks than they could keep occupied. So, they developed businesses to employ the former soldiers. The military gave private developers access to the land that served as coastal bases in exchange for shares in the resorts they built there. This was part of a deliberate strategy, developed under Nasser, to have a self-sufficient military. Some estimates put the military’s contribution to the Egyptian economy at 30-40 percent (other estimates claim a more modest 10 percent). A leaked diplomatic cable explained that Egyptian military-owned companies are “particularly active in the water, olive oil, cement, construction, hotel and gasoline industries.”

There are many types of milbus across the world, Siddiqa notes in her book. In countries like the U.S., U.K., France, Israel and South Africa, the military has many ties to civilian business, often mediated by the government, which others have referred to as the “military industrial complex.” In Iran, Cuba, or China, the military has partnered with the dominant party or leader to gain access to capital. And in places like Turkey, Indonesia, Pakistan, Myanmar and Thailand, Siddiqa writes, “the military is the sole driver of Milbus” (I would presume Egypt also falls into this group). In these cases, access to the information needed to study milbus in any detail is hard to come by, due to the secrecy surrounding these deals. (I might add that I can’t evaluate the utility of Siddiqa’s distinctions between the types of milbus here– something to follow up on.) One way in which milbus is not particularly extraordinary, no matter what flavor it comes in, is that elites in particular domains often parlay their influence into privileges in other domains (just ask C. Wright Mills in The Power Elite). The military often provides a trajectory by which individuals can gain access to, for example, leadership in business organizations or ownership of property, around the world.

Why do we (or should we) care about military involvement in business? In the most extreme cases, the financial independence (or near-independence) of a military can mean that it does not feel beholden to either the civilians it is ostensibly employed to protect or to other government leaders. Capital provides a military with a source of power not consensually or legitimately bestowed. Second, as suggested in the case of Egypt, military involvement in markets gives the military a different set of political interests and motivations, and they may act in a way to improve their own economic opportunities. In a diplomatic cable about Egypt from 2008, Ambassador Margaret Scobey wrote “We see the military’s role in the economy as a force that generally stifles free market reform by increasing direct government involvement in the markets.” Siddiqa also points out that the type of military-business relationship found in Pakistan both stems from and reproduces non-democratic “precapitalist” systems where, as historian Eric Hobsbawm describes, “assets are not only accumulated for deriving capital: rather they are acquired for accumulating power and influence.” Siddiqa argues that this fosters patron-client relationships between the military and those with other forms of political power. They end up needing each other.

The Egyptian revolution succeeded in part because it navigated (whether deliberately or incidentally) the military-government relationship. It will be worth watching how this relationship unfolds as a new government is selected.

Read more about the study of militaries in the Blackwell Dictionary of Modern Social Thought here.