The Political Value of Welfare 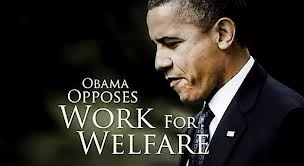 One of the latest Romney ads attacks President Obama for removing work provisions from Welfare Reform.  In the ad, disappointed-in-himself Obama (pictured left) sneakily gutted welfare reform by dropping the work requirements, so that as the ad states, “They just send you your welfare check.”  The ad’s claims are false or, as the fact-checking website Politifact put it, pants-on-fire.  What Obama has actually done is allow states to develop their own welfare-to-work programs.  The changes provide states with some flexibility regarding how not whether they meet the work provisions in the original bill.  Republicans, and Romney in particular, previously supported giving states more flexibility but the narrative not the actual policy is really the point here.

When Bill Clinton signed the Personal Responsibility and Work Reconciliation Act (or Welfare Reform) he threatened to deny the Republican Party a reliable narrative.  The belief that a governing elite is determined to take the hard-earned money of some (i.e. whites) and give it to lazy and immoral others (i.e. blacks) has long influenced American politics.  The persistence of this narrative, 15 years after Welfare Reform, demonstrates the political value of Welfare.  In other words, Welfare benefits politicians like Romney who can invoke the program to take the side of the hard-working (a category most believe they fall into) against the lazy (which most believe they do not – even those on welfare).

Welfare Reform in 1996 replaced AFDC (Aid to Families with Dependent Children) with TANF (Temporary Assistance for Needy Families).  The rationale for TANF, as I’ve noted in other posts, relied heavily on conservative myth-making.  As Katz (2012) writes, “Not only did assumptions about sexuality and race drive welfare reform, assumptions about low-income women’s work ethic and human capital guided the debate.”  Katz (2012) as well as many others, point out that work does not solve poverty because the wages at many jobs are too low.  The focus on work, however, does build a useful narrative about poverty.  Elections aren’t won due to a majority of voters judiciously weighing a series of policy proposals.  Instead, voters tend to choose between competing (mostly negative) narratives.

Romney, as many have pointed out, has rehashed a perennial conservative narrative about the economy.  The racial implications were not lost on some.  Romney must ensure that people, or at least some people don’t interpret his narrative like this: 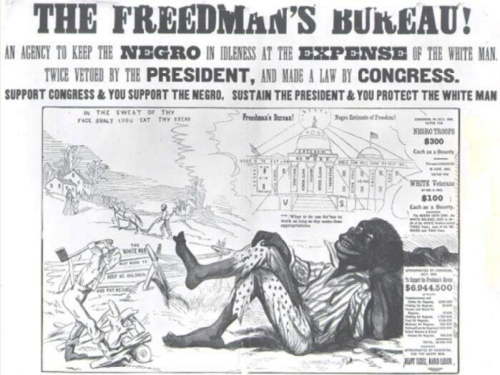 A Reconstruction Era political cartoon that accuses the Freedman Bureau of being “An Agency to Keep the Negro in Idleness at the Expense of the White Man.”

While this kind of racial imagery is now confined to fringe white supremacist websites, mainstream conservative sites feature Internet memes like these: 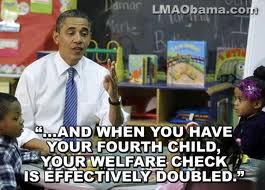 I shouldn’t have to point out that due to “child exclusion” laws welfare recipients do not get more money for more children. 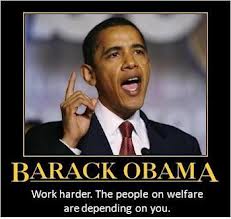 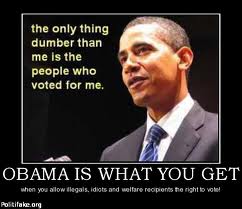 On the bottom it reads: Obama is what you get when you allow illegals, idiots, and welfare recipients the right to vote.

Politifact noted that Romney’s ad “inflames old resentments about able-bodied adults sitting around collecting public assistance.”  Politifact, of course, skipped over the key racial aspects of those old resentments.  None of the above memes are explicitly racialized but they all attempt to create a narrative about who comprises the sides in this election.  As this next cartoon clarifies: 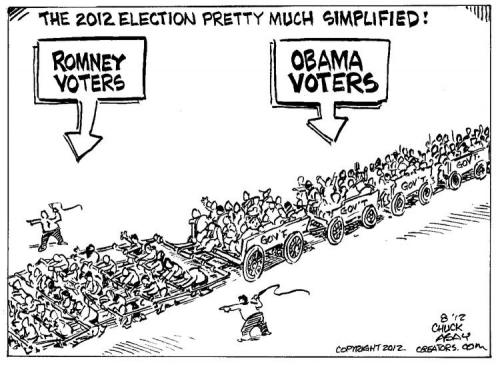 In case this is unclear, the Romney voters are working to pull the Obama voters who are sitting in carts labeled Gov’t.

Welfare is both a policy and a discursive tool to discuss inequality and morality.  As such, their are political interests in the perpetuation of poverty.  Herbert Gans wrote in his classic work “The Uses of Poverty” how the poor serve positive functions for some sectors of society.  His piece reads as a satirical critique of functionalism (Gans said that was not the point), but also points out that poverty or a class of undeserving poor serves the interests of, at least some parts of society.  He wrote that, “An economy based on the ideology of laissez-faire requires a deprived population that is allegedly unwilling to work or that can be considered inferior because it must accept charity or welfare in order to survive.”  Gans goes on to note that this population is valuable because they reduce moral pressure to eliminate poverty and make “socialist alternatives” “look quite unattractive if those who will benefit” are “lazy, spendthrift, dishonest, and promiscuous.”

Believing in a narrative and accepting that such a narrative is what a current political contest is about are two different things.  Many who despise welfare will nonetheless vote for the Democratic Party and some who reject this narrative will vote for the Republican Party.  But the narrative itself left unchallenged will continue to shape (and distort) American’s perceptions of our economy and ultimately our ability to ameliorate poverty.

I don’t have much hope that prominent politicians will challenge the narrative.  For example, Barack Obama’s campaign website makes no mention of poverty or the poor.  Will anyone defend the poor at either party convention?  Will “the poor” even enter the discourse?  Or will the poor come morally-sorted into “those who have fallen out of the middle-class” and “welfare recipients”?