Last week, the Supreme Court heard arguments in the case of Wal-mart v. Dukes, in which the key issue is whether hundreds of thousands (or even up to 1.6 million, depending on what you read) female employees of Walmart should be certified as a class and therefore pursue a class action lawsuit. Here I review some details relevant to class certification, including the two types of sociological claims made their way to the heart of the case: empirical claims regarding the effect of organizational culture on discrimination, and disciplinary claims about the validity of arguments based on social scientific evidence. (The legal claim of this case is not that Walmart did or did not practice discrimination—that is the issue in Dukes v. Wal-mart, which alleges systematic discrimination against women in hiring for managerial positions at the mega-corporation. For more information about Wal-mart (including the hardly essential, yet oft recurring Wal-mart/Walmart distinction), check here.)

In order to establish class certification, precedent requires the plaintiffs in the Dukes case to identify a common policy at Wal-mart leading to discrimination or the possibility of discrimination against all members of the class. Thus, a crucial question of the case is whether a centralized organizational culture permeated hiring decisions at Walmarts across the country, subjecting all female employees to the same wrong, and thus justifying treating them as a class. Sociologist William Bielby, a noted scholar of employment discrimination, provided expert testimony in the case, and drew on the vast sociological literature on employment discrimination to suggest that both Walmart’s centralized personnel policy and the discretion afforded to local managers contributed to the disparate hiring outcomes observed in the aggregate data. Opposition to this claim has followed two paths. First, in court questioning on Tuesday, several Supreme Court justices seemed skeptical about the logic of the claim that an organizational culture of uniformity could be consistent with high levels of discretion afforded to local store managers. Second, as a New York Times article described, Professors Laurens Walker and John Monahan of the University of Virginia, who coined the term “social framework analysis” to describe a method by which social scientific evidence can inform litigation, criticized Bielby for drawing conclusions about the specific case with Walmart based on general information. Thus, the validity of conclusions based on social scientific evidence itself became a factor in the case. (There is much debate over social framework analysis so I will leave you to read about it from other sources.)

Richard Thompson Ford, in an article on Slate, argues for the value of class action lawsuits as a general strategy for challenging discrimination. And, the type of evidence the plaintiffs in the Dukes case are employing is especially suited to a class action lawsuit: their argument demonstrating discrimination relies on statistical models demonstrating patterns consistent with evidence of discrimination. The discrepancy between the gender composition of the work force– about 75% of Walmart hourly wage sales employees are women– and the composition of managerial positions at Walmart– about 33% of which are occupied by women– provides the starting point for this analysis. 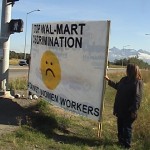 The plaintiffs use aggregated data to demonstrate a “pattern and practice” of employment discrimination. The evidence also includes about 120 claims of individual discrimination, though proving discrimination against any one individual is often extremely difficult. And, Ford argues, if class certification is denied, it is likely that very few women would pursue individual suits. There is, however, no consensus that class action lawsuits are the best way to pursue discrimination cases. As the New York Times‘ Supreme Court correspondent, Adam Lipnak writes, some legal scholars and judges question whether class action lawsuits this large can feasibly honor rights to due process given that plaintiffs would be bound by the results of the class action and thus forfeit their right to sue individually.

One of Walmart’s main strategies in the case is to question the statistical models demonstrating a pattern of discrimination, “saying that it relieves the suing women of actually proving they suffered biased treatment, and it takes away the company’s legal right to defend itself against the claim of bias.” In a sense, Walmart’s lawyers and Professors Walker and Monahan are declaring foul by way of ecological fallacy (a bias in reasoning where one infers something about a specific case from data about the group), though for two different reasons. Walmart lawyers opposes the use of aggregate data to make claims about discrimination against specific individuals in the absence of other evidence. Professors Walker and Monahan oppose the use of a body of work about discrimination to make particular, specific conclusions in one case, as they argue Bielby has done.

The American Sociological Association’s amicus brief in support of the 9th Circuit Court’s certification of class addresses the criticisms of Professor Bielby’s application of general findings to a particular case:

The current debate about social framework analysis largely ignores that principled social science methods already dictate when and how general findings inform specific cases… Proper social scientific research does not draw unsupported conclusions about specific cases based on general patterns in aggregate data, but rather formulates testable hypotheses based on existing research. The probability that a given case will conform to predicted patterns varies with the strength of past findings as well as available data on the specific case. Social scientists thus necessarily consider both “general” and “specific” information within a rigorous structure that acknowledges variable certainty.

It is not true that social scientists cannot rigorously use general data to understand specific cases. The court should look beyond petitioner’s opposition to legally defined “social framework analysis” and to the actual social science methods that inform research.

(The brief’s review of specific findings on the relationship between corporate culture and discrimination deserves its own post.)

Read Bielby and Coukos on the use of statistics in legal cases, and a review of the sociological literature on gender and glass ceilings.