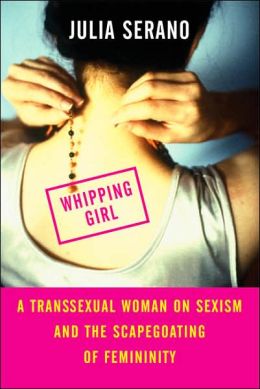 In Julia Serano’s (2007) Whipping Girl: A Transsexual Woman on Sexism and the Scapegoating of Femininity, the author writes about transsexuality. In particular, she writes about living as a trans woman in today’s society, the immense challenges faced by those in the trans community, and the inability of femininity to rise above the inferior status placed upon it by masculinity. Beyond explaining transsexuality to the reader and detailing the fallacious stereotypes that are often used against trans people, Serano separates herself from others in the field by carefully and smartly noting how the negative perceptions afforded to trans women illustrate the wide-range of misogynistic and pro-masculine attitudes that are still held in American culture. She explains that the preference for trans men over trans women is but one example of our society’s preference for masculinity over femininity. From her unique perspective, however, Serano sees trans women as being in a distinctively powerful position because of their experiences with living as a male and as a female. Using her life story to vividly elucidate this and other ideas, the author is able to advocate for the strengths of transsexuality. Considering such an argument, I will use this this post to analyze Serano’s book by critically evaluating its strong and weak points.

In regards to the strong points of the book, there were certainly many ideas that stood out. Firstly, it seems important that this reading takes a unique approach to discussing transsexuality. That is, rather than simply writing about the nitty-gritty of sex reassignment surgery or supplying the reader with an autobiography, Serano writes a book that takes a hard look at the discrimination faced by MtF (male to female) individuals as well as our society’s preference for masculinity over femininity. By taking such a perspective, she is able to challenge traditional sexism (i.e., the belief that maleness and masculinity are superior to femaleness and femininity) as well as oppositional sexism (i.e., the belief that female and male are rigid, mutually exclusive categories). Secondly, it was essential for Serano to address the stereotypes of transsexuals, especially those stereotypes propagated by the media. The media plays a huge role in how the cissexual public (i.e., those whose sex and gender are aligned) sees trans people, and so it was crucial for her to talk about and dismiss many of the ideas put forth by misguided TV shows and films. Thirdly, I found it helpful that Serano made the connection between the resentment felt toward trans women and the existence of traditional and oppositional sexism in our society. If even self-proclaimed feminists can be viewed as being misogynistic based on how they treat trans women, then this suggests that we have only scratched the surface on achieving gender parity. Lastly, I liked that the author concluded her book by discussing one final topic: gender entitlement. Regarding gender entitlement as being the next roadblock to achieving gender and sexual freedom, Serano (2007:362) concludes her book be arguing that we need to challenge gender entitlement if we are to “take the next step toward a world where all people can choose their gender and sexualities at will, rather than feeling coerced by others.”

Despite these strong points, however, there were a few issues that I had with the book. Most noticeably, it was a lengthy read that sometimes seemed repetitive. Secondly, the author occasionally came of as very (if not understandably) angry. As an example, she strongly berated feminists, especially those who she viewed as espousing transphobic views.  To her credit, though, Serano still seems to retain hope that feminism will come to fully realize that trans women are an ally in the fight against gender inequality.  Lastly, she could sometimes be very dramatic.  As an example, Serano (2007:273) writes the following: “When I was a child, I was sexually assaulted, but not by any particular person. It was my culture that had his way with me. And when he was through, he carved his name in my side so that I’d always have something to remember him by.” While I understand that Serano must feel great pain about her experiences with an intolerant society, I worry that such statements may be so unrestrained that they may discourage the reader from critically evaluating Serano’s bigger point.

As is probably evident, I had mixed feelings about this book. I liked that Serano took the topic of transsexuality somewhere that it rarely gets to go and that she challenged us to be more accepting of people who stand on the margins of society, but I also had issues with some of the directions that Serano chose to take. Still, this is but a cursory evaluation of Serano’s work, and I’m certain that there are many different opinions on the positive and negative aspects of Whipping Girl. In your opinion, what are the best parts of the book? What would you change, if anything? What has Serano’s work done to our understanding of transsexuality? What do you think?