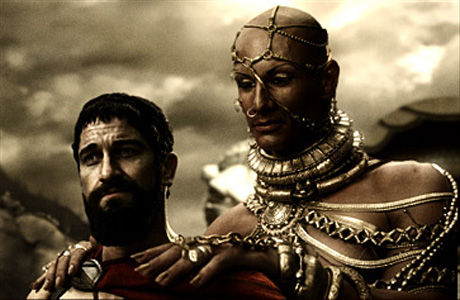 In a recent post, I discussed a longstanding trend in American (and Western) media of using racial Others to embody evil.  From adult action films to children’s animated features, we can find examples of villains whose malevolent nature is clear from the racial/ethnic stereotypes used to characterize them. But racial stereotypes are not the only stereotypes used to denote wickedness; we can also find many examples of non-normative sexualities and gender performances associated with evil. Importantly, this sexual Otherness is often developed alongside and in relation to racial/ethnic Otherness.

The intersectional nature of race, gender, and sexuality is fundamental here. Many scholars have documented the connection between racial and sexual Otherness. As Edward Said explains is his exposition of Orientalism (the discursive tool through which Europe and the West has understood the Middle East), the Orient is characterized by its sexual peculiarity. Anything goes, it seems, in the Oriental world of excess; this “sexual excess” is best captured, in the European or American mind, by the image of the harem (see, for example, Said, 1975: 57, 102-103; also Alloula, 2000). Joane Nagel (2003) presents wide ranging historical examples outside the Orient (from the era of direct European imperialism to slavery to modern times) that demonstrate this point. As Nagel explains, “The sexual ideologies of many groups define members of other classes and ethnicities as sexually different from, usually inferior to their own normal and proper ways of being sexual. These class or ethnic ‘Others’ might be seen to be oversexed, undersexed, perverted, or dangerous” (9). Nagel’s overarching point is that “ethnosexual boundaries” (the lines we draw demarcating ethnic/sexual insiders and outsiders) are central to definitions of nation, citizenship, family etc. These sexual ideologies and stereotypes make their way into media representations just like the racial stereotypes I discussed in the prior post. And when ethnosexual Others appear, it is often as villains.

An example may help illustrate my point: Zack Snyder’s 300 (2006). For those unfamiliar with the film, it is a fantastical reimagining of the ancient battle of Thermopylae, where the Spartans, numbering only 300, attempt to defend against imperial conquest by the Persians. In the film, the Spartans are paragons of bravery, heroic to the core. Gerard Butler plays the lead, King Leonidas, followed by a small army of chiseled muscle-men sporting speedos and spears. From their beards to their pecs, the Spartans are the epitome of heterosexual masculinity. As heroes, they are pure—they are committed to right over any bodily or worldly desires, even sexual desires as they abandon their wives for the cause and reject offers of concubinal pleasures. They are devoted to freedom and nation and willing to sacrifice everything for liberty.

In stark contrast stand the Persians, the epitome of Oriental excess and evil, embodied most clearly by their leader, Xerxes. Played by Rodrigo Santoro, Xerxes (also in a speedo) is highly effeminized: his skin is dark, hairless, and pierced; he wears eyeliner and gold makeup and is decadently decorated in gold jewelry. Though surrounded by a harem of belly dancing women, and making sexually violent threats towards the Spartan women, Xerxes exudes stereotypical homosexuality in mannerism and style. He stands much larger than Leonidas, but given his styling and sexual ambiguity, this makes him more scary than manly. His army, a dark-skinned horde that includes literal monsters, is also of questionable sexuality (and masculinity)—the fact that 300 Spartan men stand strong against the 100,000+ army evidence of the failure of Persian masculinity. (For further analysis of this film and others like it, see Pierce, 2011 and Es, 2011, especially pg 15-23.)

As in my discussion of racial Others in film, these ethnosexual Others reinforce existing societal ideologies. They reinforce a gender and sexual order that places (white) normatively masculine, heterosexual men at the top; second, they maintain our mistrust of the GLBT (in the case of Xerxes, especially the G and T) communities. By using sexual Others to denote evil and immorality, audiences are reminded of the centrality and rightness of heterosexuality and normative masculinity. With 300, a triumphant tale of a battle for democracy (to which we trace our democratic origins), we are also given instruction about the relationship of ethnosexual Others to the nation—they are clearly a threat. In Nagel’s words, “The link between war and manhood and the notion of our men as virile and their men as degenerate (and our women as pure and their women as sluts) illustrates often hidden, but powerful sexualized assumptions about the nation, its citizens, its defenders, and its enemies. Good citizenship relies on appropriate sexual behavior and proper gender performance” (2003: 30).

Is it possible to create entertainment forms that don’t rely on these easy stereotypes? How can we push Hollywood and other media outlets to imagine new characters, both good and evil? And, at a higher level, how can we engage in cultural critique of the ethnosexual ideologies that govern nation, citizenship, and basic structures of belonging?

Pierce, Jerry B. 2011. “To do or die manfully”: Performing Heteronormativity in Recent Epic Films. In Of Muscles and Men: Essays on the Sword and Sandal Film, edited by Michael G. Cornelius. pg 40-57.