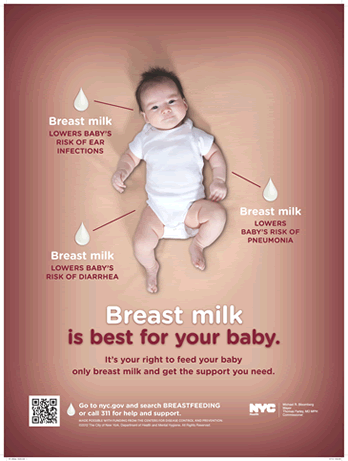 This past September, a new initiative went into effect in NYC. The initiative, called Latch On NYC, is intended to support women’s right to exclusively breastfeed their infants, and to support women in that endeavor. To achieve its goal, the project involves a breastfeeding awareness campaign, and some voluntary limitations on hospitals—specifically, they are to limit new mothers’ access to formula.  The initiative emerges out of an increased understanding of breastfeeding’s benefits to infant health, among other things.

Before continuing, I want to acknowledge the feminist quagmire that I’m entering by talking about breastfeeding. It is a contentious issue, and rightfully so. Even though feminist communities may not agree, at the core of their arguments is an acknowledgement of the social conditions that shape women’s experiences of child bearing and rearing, and the necessity of empowering women to live meaningful, autonomous lives. On the one hand, breastfeeding is often seen as part of a patriarchal essentialism that ties women inextricably and completely to their reproductive capacity (this article at Jezebel touches on this kind of feminist argument). Freeing women from these types of expectations (even from the requirement to be a mother) has been a primary goal of mainstream feminism in the US for decades. Formula gave many (predominantly white, middle class) women the ability to nurture careers and babies simultaneously. On the other hand, for many women, breastfeeding is a luxury that they have continually been denied. Working class and poor women, often women of color and immigrant women, face major barriers to breastfeeding—long work hours or multiple jobs, caretaking jobs that require women to be away from home for extended times, nutrient-poor food, health concerns and lack of access to medical consultation, etc. As documented by Dorothy Roberts and others, American society has long impeded the reproductive autonomy of women of color and poor women. And regardless of class status, the social stigma against public breastfeeding has, itself, been very restrictive.

Where exactly does Latch On NYC fit in this imbroglio? Well, it addresses some concerns and overlooks others. For example, the public awareness campaign—posters which feature angelic babes from varying racial/ethnic groups, and the slogan “Breast milk is best for your baby. It’s your right to feed your baby only breast milk and get the support you need”—may help dispel some of the social stigma. Additionally, by encouraging hospitals to develop better breastfeeding programs, we may be able to provide better information to new mothers, especially those who might not have had access to lactation consultants in the past.

But its emphasis on “you” individualizes what is actually a social (set of) problem(s). Like much of the public discourse on breastfeeding, the focus tends to be on women’s choices—in this case, to breastfeed or to use formula—and how their choices impact children. Sure, there is recognition that hospitals contribute in important ways to this choice, but the campaign still emphasizes the mother’s ultimate role in doing what is best for her baby. Just under the surface lurks a problematic sense of responsibility, a space to use guilt and blame to force a mother’s hand (see Sutherland, 2010 for more on mothering and guilt/shame). And more than that, this emphasis on the mother’s choice renders invisible those structural conditions that feminists from all backgrounds have questioned. The campaign does nothing to get employers to provide safe and hygienic spaces for women to feed or pump when necessary. It does not address the conditions poor women face—for example, it does nothing to longstanding structures of inequality (lower quality health care facilities in lower class neighborhoods, racial inequities in occupational and educational settings) that interfere with women’s reproductive and childrearing choices. Nor does it address the essentialist beliefs that many women want to reject.

To top it off, I don’t think that this campaign is even really about women and enabling their choices or rights. If the failure to address the many conditions that enable or constrain breastfeeding doesn’t convince you, perhaps the posters will. The priority, the person who matters, is the baby; the mom, the “you,” is implicit. Just like the famous fetal images that appeared in Time Magazine and were later appropriated by the anti-abortion movement, which seem to depict the fetus as independent from its mother’s body (see a short comment here), the breastfeeding mother and her body are all but erased by the Latch On campaign. I’m sure there are other ways to interpret the images—and I’m open to hearing them—but I am nervous about a campaign “for women” that seems so uninformed by feminist theory or the long, problematic history of infringements on women’s reproductive rights, and that literally leaves women out of the picture.