A Review of Jennifer Baumgardner's Look Both Ways 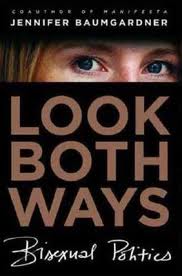 In Jennifer Baumgardner’s (2007) work on bisexuality, Look Both Ways: Bisexual Politics, the author writes about her own experiences as well as recent pop culture events in an effort to discuss the common misconceptions (and hidden benefits) of bisexuality. One of the public’s biggest misconceptions, Baumgardner explains, is that bisexuals do not really exist. Straight people sometimes regard bisexuals as going through a “phase” while gay people sometimes regard bisexuals as being “part-time” homosexuals who want the best of both worlds. In reality, the author remarks that bisexuality has an interesting and potentially revolutionary position by being located between the entitlements associated with heterosexuality and the predicaments associated with homosexuality. By being able to bridge this gap, Baumgardner (2011:222) contends that bisexuals could be a source for positive transformation since “it takes someone who has known relative freedom, who expects it and loves it, to help ignite social change.” Using her life story to vividly illustrate the very realness of a bisexual identity, the author cites being able to look both ways as an indication that sexuality is fluid and, oftentimes, strongly impacted by one’s environment. Considering such an argument, I will use this post to critique Baumgardner’s book by critically evaluating its strong and weak points.

In regards to the strong points of Baumgardner’s work, there were many. Firstly, I found it important that she speaks to the biases surrounding bisexuality. Among other charges, critics of bisexuals argue that they are going through a temporary phase, seeking attention, only doing it because it’s trendy, or suffering from a pathological disorder or weakness. Rather than accepting such claims, Baumgardner repeatedly reminds the reader that sexuality is fluid and should not be disregarded just because it challenges conventional norms. Secondly, I thought it was interesting that she highlights the discord that can sometimes exist between female bisexuals and lesbians, particularly in reference to the idea that some lesbians feel that bisexual women want to have it both ways by getting to enjoy the privileges of heterosexuality and the pleasures of women. This bias harkens back to the lines that were drawn within the lesbian community during the second wave of feminism. Thirdly, I found it noteworthy that the author argues that many women go into heterosexual relationships with “gay expectations” by expecting their male partners to want to share strong emotional connections as well as a sense of egalitarianism. Often finding this to not be the case, Baumgardner explains that bisexuality may be attractive to women since it offers them a chance to bond with someone who also values deep relationships and equality. Lastly, I liked that Baumgardner has a problem with the term “bisexual.” She writes that while she does not feel heterosexual or homosexual are appropriate descriptors for her and others like her, the term bisexual is equally incomplete and unable to allude to the flexibility that is sexuality. Baumgardner suggests that the problems inherent with this term signify that it has unfinished political business.

Despite these strong points, though, there were a few concerns that I had with Baumgardner’s work. Most glaringly, Baumgardner spends very little time discussing men’s bisexuality. While I realize that she was writing about her own experiences and was primarily concerned with women and their sexuality, I feel that she could have really taken the book a step further by looking at the bisexuality of men. It would have been interesting for the reader to learn about the similarities and dissimilarities faced by male and female bisexuals. Another issue I had with the book is that Baumgardner was often quite dismissive of men. I understand her point that men are often not as emotionally sophisticated as women, but it seems unfair to paint most of the male species as being unable to form lasting emotional bonds. While Baumgardner was critical of women, too (e.g., she contends that women need to be more direct and clear about what they want and expect from a relationship), much of her ammunition was saved for men. The final problem that I had with Baumgardner’s book is similar to an issue noted by Norah Vincent (2007). In her review of the book, she writes that Baumgardner is misguided in her view that bisexuals can overcome common biases by being sexually active and open about their sexuality. As Vincent writes, “We will have won the battle against puritanism in America not when sexuality is run up the flag pole, but when it is irrelevant.”

In conclusion, Baumgardner’s work provides the reader with a discussion on an interesting topic that has historically been dismissed by American society.  While there are a few things about the book that I wish Baumgardner would have expanded on/wrote about, it seems to have more strong points than weak ones.  Still, this is but a cursory evaluation of her work, and I’m certain that there are many different opinions on the positive and negative aspects of Look Both Ways.  In your opinion, what are the best parts of the book?  What would you change, if anything?  What has Baumgardner’s work done to our understanding of bisexuality and sexuality in general?  What do you think?