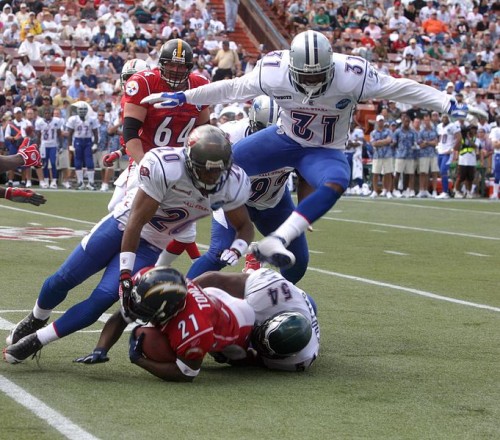 Earlier this year, many retired football players and their families filed a class-action lawsuit against the NFL. The complaint states that the NFL hid evidence of the dangers of the game, dangers like brain damage from repeat concussions and sub-concussive trauma. New research indicates that the repetitive beatings that football players experience over the course of their career causes irreparable damage to their brains, leading to cognitive, emotional, and functional problems similar to Parkinson’s and Alzheimer’s diseases. Several players committed suicide after repeat concussions left them with depression and mood swings, and many others continue to suffer memory loss, cognitive impairment, and balance problems.

American football inevitably leads to injury; it is part and parcel of the game. There is no way that 22 men, weighing somewhere between 200 and 350lbs can charge at each other at full speed, collide and pile on top of one another, without someone sustaining injuries along the way. Couple the inevitability of injury with the gendered expectation that men endure pain in silence (“no pain, no gain”), and you have the perfect storm of conditions. You end up with men suffering in silence until their symptoms become uncontrollable; you end up with players who voluntarily continue to play after sustaining an injury; you produce “role models” who perpetuate this unhealthy lifestyle to boys who desperately want to fit in.

But why do men comply? Why do they continue to take the beatings? We might explain this by looking at the financial gains of professional football players. But so many men play the game from early on, through middle and high school, and into college, knowing that their chances of making it a career are very slim. So the reasons for continuing to endure the trauma are psychological and cultural.

We’ve long known that masculinity has many requirements for men, among them the demand for aggressive and competitive behavior. Boys learn early on that they should be adventurous, willing to lead a rough-and-tumble life, and nowhere is this guideline so clear as in the context of violent team sports (Dufur and Linford, 2010). The fact that the football field is an all-male space connects it to patriarchy—men prove their superiority as a group because it is their bodies, not women’s, which are capable of all that football requires. But patriarchy isn’t just about men dominating women, but also about men dominating other men. The homosocial bonding between team members, coupled with the intermale dominance (Sabo, 1994) where one team of men conquers another, and men compete with one another to be the strongest/fastest/best, makes football (and other male-dominated sports) a zone of patriarchal practice.

Men police one another’s gender performance on the field (Vaccaro, 2011; White, Young, and McTeer, 1995): men who don’t run fast enough are said to “run like a girl” or those whose passes don’t fly far enough “throw like a girl”; those who sit out after being tackled are “pussies” who “can’t take it”. Players must demonstrate their manliness by rejecting any semblance of feminine behavior, even those behaviors that work as self-preservation. As Don Sabo explains, the players all adhere to the “pain principle,” a philosophy that “prioritize[s] pain over pleasure” (White et al, 1995). Pain in sport is normalized—players expect it, and learn to cope in various ways. Some hide it from themselves and others, some downplay it; even those who must acknowledge it and seek treatment usually return to the sport that harmed them (White et al, 1995). Ironically, men must break their bodies in order to prove that they are unbreakable (Messner, 1990; White et al, 1995).

Something has to give. Up to this point, the only give has been in players’ bodies—the bones that break, skin that bruises, brains that bounce around inside skulls. But I think that these bodies can give no more. I think we need to make some changes. We need to make ourselves aware of the demands we make on our boys and men, and the demands they enforce on each other. If we are going to ask them to demonstrate physical prowess through aggressive and competitive sports, then we cannot also demand that they suffer in silence. There must be room for men to acknowledge their pain, and seek treatment and therapy. We should probably also consider age restrictions on these dangerous sports (football, hockey, and wrestling, for example, are all guided by the “pain principle” and lead to negative health outcomes); should we teach our 8 and 10 year olds to play a game that may, by the time they reach college, leave them with brain damage comparable to that in elderly dementia patients? Finally, we need to find a new national pastime. Maybe one that doesn’t promote gladiator-like brutality and abuse, not to mention drug abuse and homophobia.

Messner, Michael. 1990. When Bodies are Weapons: Masculinity and Violence in Sport. International Review for the Sociology of Sport 25(3): 203-218.